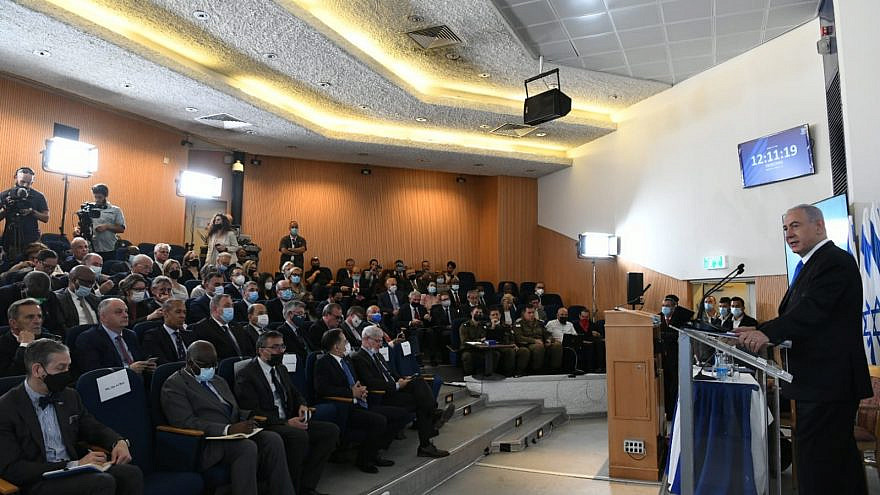 (May 19, 2021 / JNS) Israeli Prime Minister Benjamin Netanyahu emphasized to foreign diplomats that the Israel Defense Forces go to great lengths to target its enemies with great precision and to avoid collateral damage.

“They murder everyone—any civilian they can get their hands on. They use civilians. They target civilians while hiding behind civilians using them as human shields. This is the problem that we face.”

Netanyahu went on to say that “there is no army in the world that does more than the Israeli army, in the Israeli security services, in Israeli intelligence to prevent collateral damage,” and called criticism of its use of force in the Gaza Strip as “absurd.”

“Instead of having the perpetrators who commit double war crimes, who are hiding behind civilians and firing on civilians, not having them criticized but having you criticized is the height of hypocrisy and stupidity. What that does is in fact encourage the terrorists. It gives support—it gives encouragement to the terrorists—and that is something that is bad for each one of us.”

Netanyahu noted that three foreigners in Israel—two agricultural workers from Thailand and one Indian caregiver—have died as a result of rocket attacks on Israel.

During the briefing, the prime minister also presented the ambassadors with documentation of IDF attacks in the Gaza Strip against Hamas and Palestinian Islamic Jihad, as well as the location of stockpiles of missiles, rockets, terrorist buildings, command centers and numerous terrorist infrastructures.

Also presented were videos of rockets being fired at citizens of the State of Israel and misfiring by the terrorist organizations, which endangers the residents of the Gaza Strip. Israeli ambassadors around the world also participated in the briefing via Zoom.

“I’m not shy about saying it openly,” said Netanyahu. “I think you should support Israel strongly because this is not merely a question of Israel’s security; it’s a question of our common security and our common interests in the Middle East.”