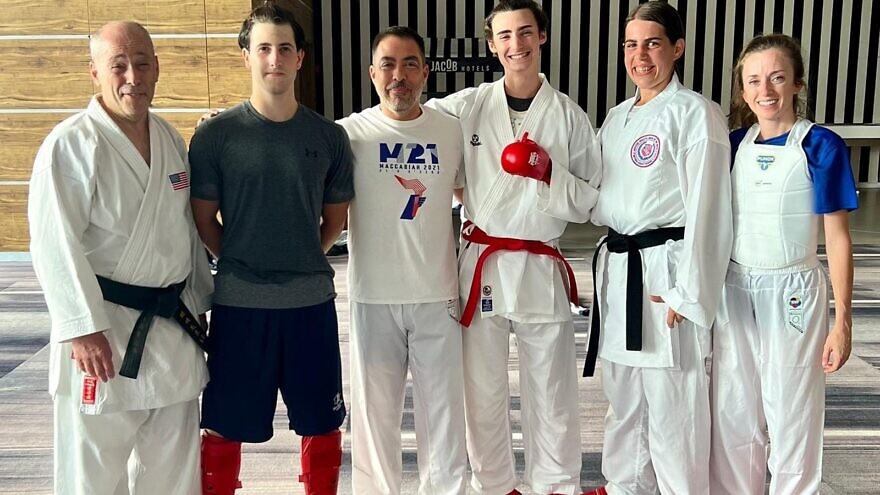 Dr. Leeber Cohen, 65, an ophthalmology from Teaneck, N.J., has been involved in martial arts since he was 12 and now teaches it as well. Credit: Courtesy.
Republish this article
1126 WORDS
Spread the word.
Help JNS grow!
Share now:

(July 21, 2022 / JNS) Some doctors and lawyers of a certain age spend their days working at the office. Others fly to Israel to participate in a Maccabiah martial-arts event—or stay at home counting the days until they recover from a hip transplant and can compete in the 2025 Maccabiah triathlon in three more years—at age 83.

Dr. Leeber Cohen, 65, of Teaneck, N.J., is currently in Israel now competing in his first Maccabiah. When he saw a post in the “TeaneckShuls” email group this past November asking for “high-level Jewish athletes” who might want to consider competing in the once every four-year international event often affectionately called “The Jewish Olympics,” Leeber jumped at the chance.

“It was always in the back of my mind,” he says.

“I love ophthalmology; it is very fulfilling,” adds Leeber, who also has rabbinic ordination and enjoys teaching daf Yomi (daily pages of Talmud). But he has been practicing martial arts much longer than his livelihood. “I was at a friend’s sleepover at age 12 and started going to a [martial-arts] class.” The former Upper West Side and Great Neck, N.Y., resident has been connected to the Tora Dojo Martial Arts Association ever since.

Tora Dojo was founded in 1967 by Grandmaster Harvey Sober, a professor at the Yeshiva University of New York. The name is a bit of a play on words as tora is translated as “tiger” in Japanese, and “Torah” in Hebrew refers to the Jewish Five Books of Moses. Dojo means “school” in Japanese. The martial-arts form stresses physical and mental discipline, classical Chinese-style martial arts as Jewish spiritual and mystical concepts.

Leeber has been working with the same teacher almost continuously since age 12, with a few years off for college and medical school. He contacted Maccabiah USA karate co-chair Alex Sternberg, as well as the two karate masters he had been working with for years. He completed the forms, sent a video of him performing and was accepted to the team. In preparing for the Maccabiah, Leeber had to learn a new form and be prepared to perform with younger athletes as the masters division was potentially going to be canceled. 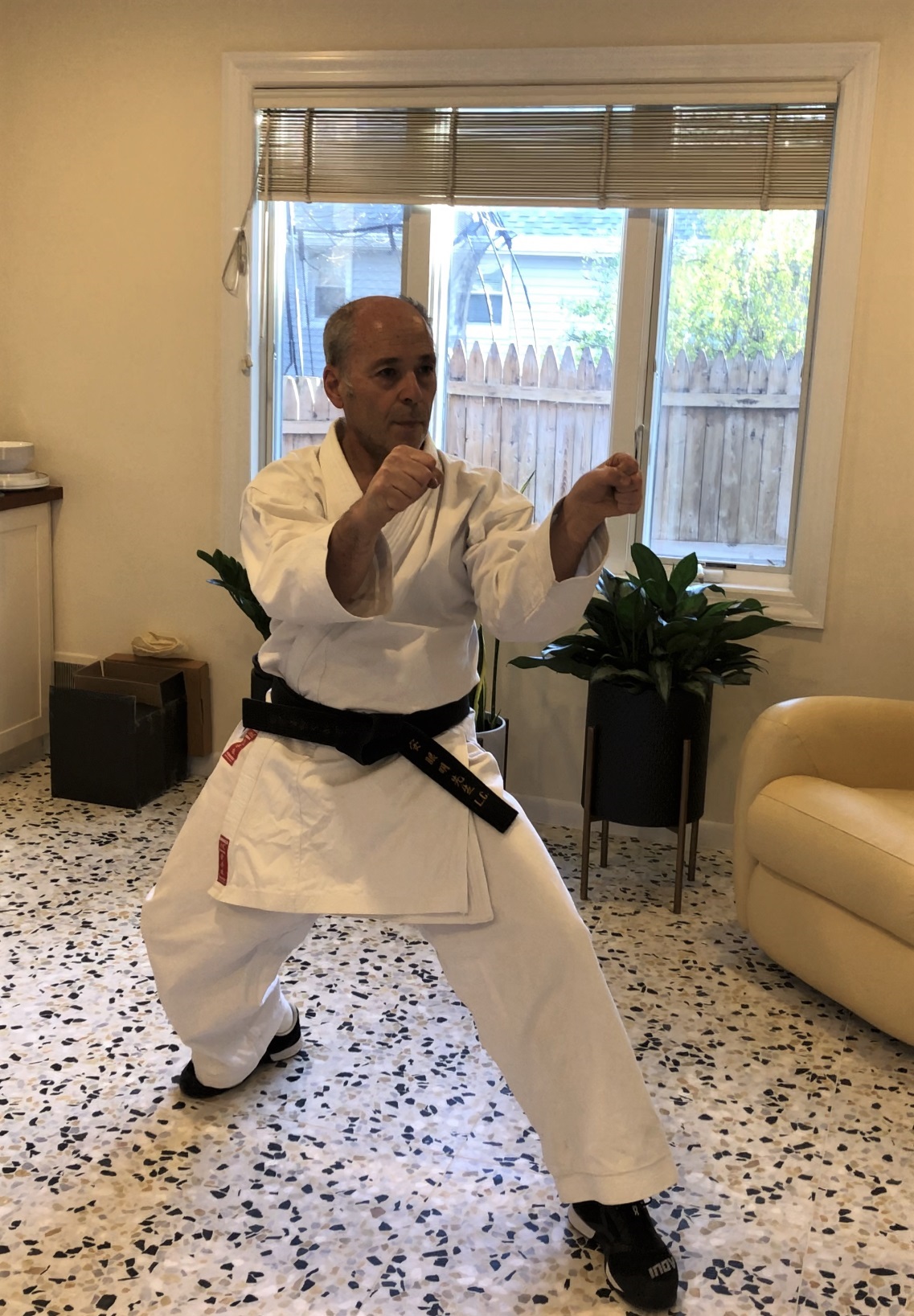 Leeber spent the first part of his trip in Jerusalem—close to his mother and sister, and the Teddy Stadium, the site of the July 14 Opening Ceremonies attended by U.S. President Biden, Israeli President Herzog and approximately 10,000 athletes from 80 countries and tens of thousands of spectators in attendance.

He then relocated with the team to Hadera for the July 18 and July 19 karate competition at the Anerbox Arena.

“This has been a fabulous, fantastic experience,” he reported before leaving for Israel. “The training and working out for hours and hours has been so exhilarating,” adds Leeber, who has lost 10 or 15 pounds in the process.

The excitement started at John F. Kennedy, and then in Israel, which was buzzing; there were posters everywhere and signs,” he reports. “And the Opening Ceremony was fantastic!”

He went on to say that on Tuesday, the day of the competition, “we competed with the 18s and older. Some were top-level. One was third in Europe; one was eighth in the world …

“We entered, bowed to the judges, bowed to the audience, and then they played “Hatikvah,” which was the highlight of my experience. I did not medal; I missed eligibility for the bronze by one-tenth of a point.” 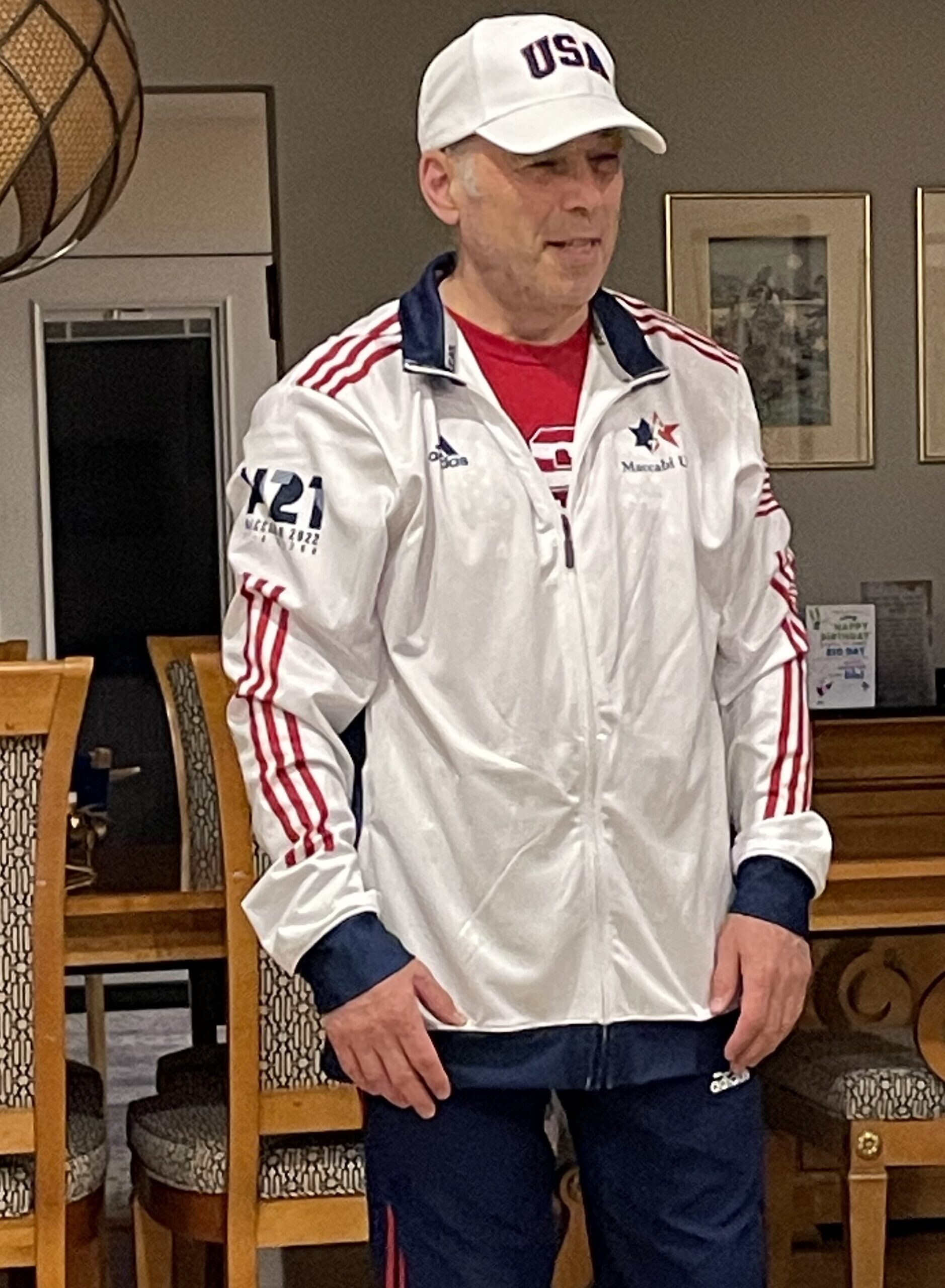 Leeber reports that “the achdut (‘unity’) was terrific. We are really all Jews in the end; we are competing with we are all cousins and family.”

And he also doesn’t forget to credit the true heroes: “My wife has been incredibly supportive, and my family says they are proud.”

Leeber recounts playfully, “When I told my [then] 9-year-old grandson that I was going to the Maccabiah Games, he excitedly told his day-school teacher that his grandfather was going to the Olympics.”

Leeber may not be participating in the Olympics, but he is giving his grandson, family, the Teaneck Jewish community and the Jewish people reasons to feel proud.

‘A connection and devotion to Israel’

Robert Sugarman, 80—a veteran of the 2009, 2013 and 2017 games—is sitting out this Maccabiah as he is recovering from mid-June hip surgery. For now, he will have to be content playing golf, which he can resume in August, according to his doctor. 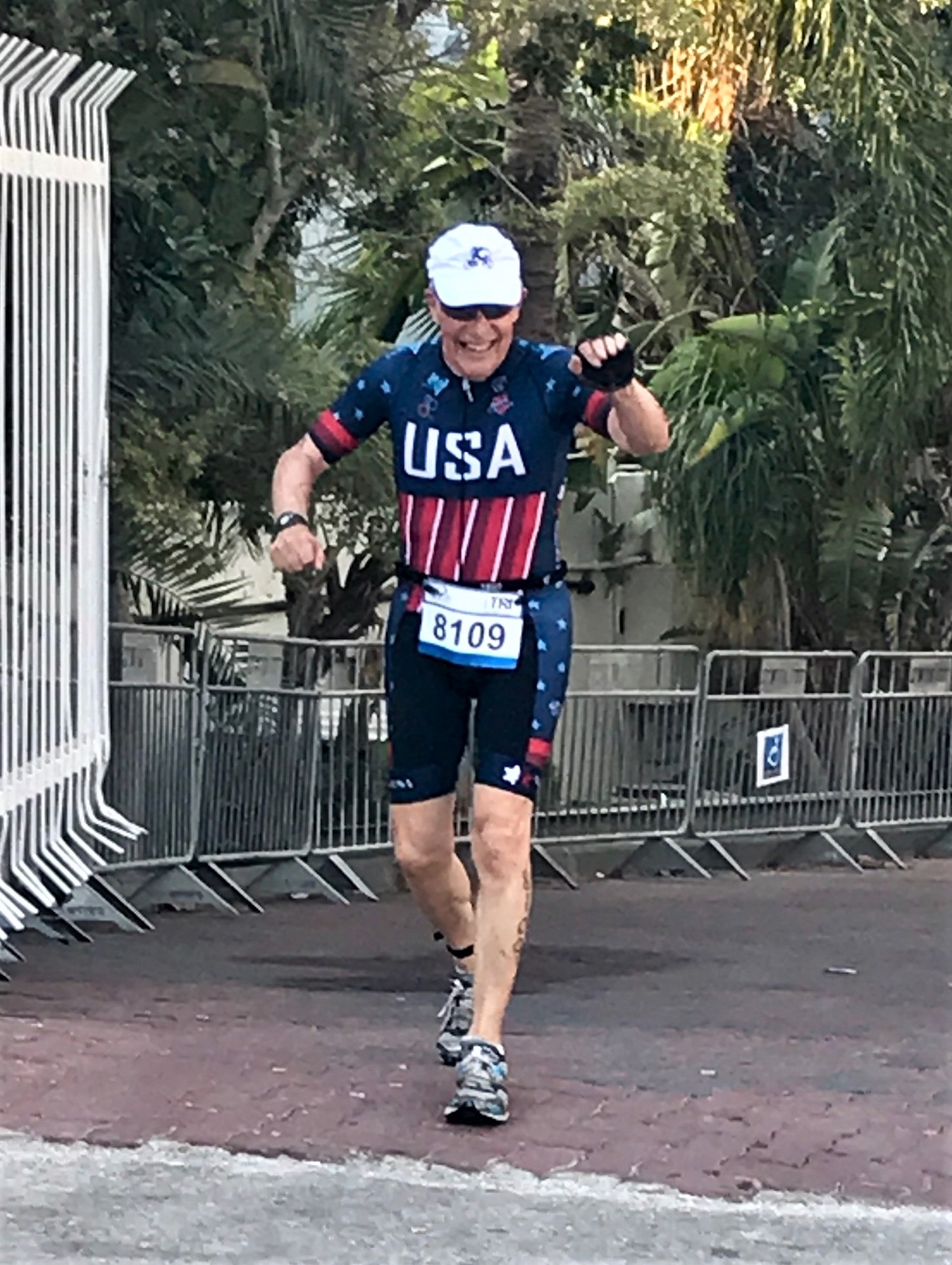 Robert Sugarman running in a competition in the United States. Credit: Courtesy.

Sugarman’s interest in competing in triathlons started with his early exposure to swimming. “I started swimming at age 4 because my parents were swim counselors,” he says. “I swam in high school and tried to swim at Yale.”

The idea for triathlons was planted in 1999 during a conversation with a friend from KJ (Congregation Kehilath Jeshurun), Sugarman’s synagogue on New York’s Upper East Side, “I had swam forever and biked as a kid, but I had never run,” he recalls. “I started with a triathlon in Central Park in 2000 to see if I could and have continued to do triathlons. I did my first triathlon in Israel in 2009 and won a bronze medal.”

Sugarman finds participating in the Maccabiah “falls into place” for several reasons: “I have an affinity to swim and bike, and I have a connection and devotion to Israel—going back to my parents who were active in the ADL.”

Sugarman first visited Israel in 1956 when he was one of six New York City high school students chosen by the New York City Department of Education to participate in a three-week program sponsored by the Ministry of Education, and notes that his “love and support of Israel started then.” 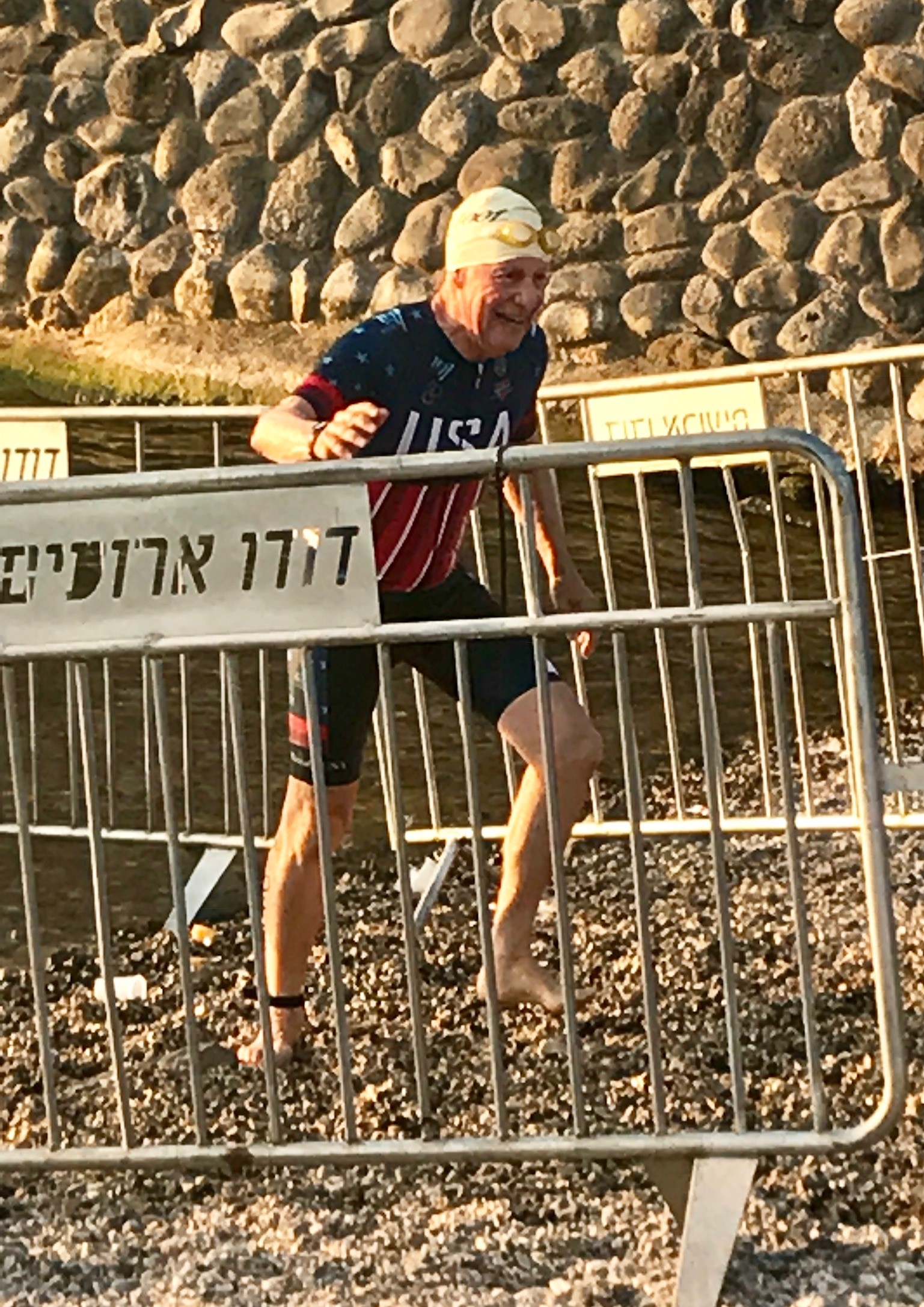 Sugarman at a swimming competition in Israel. Credit: Courtesy.

Sugarman also describes himself as a “patriot” and proud American. He served in the U.S. Army for several years, including a year-and-a-half stint at Fort Lewis, a former army base located nine miles from Tacoma, Wash. He served as a commander and returned to the East Coast to practice law as the Vietnam War was taking place.

He says he is disappointed to miss the 2021 event, which was rescheduled for 2022 and taking place from July 12-26. He is also proud to represent America. “The combination of representing the United States in a combination—in Israel—is very special to me.”

Sugarman speaks fondly of gathering with all of the American athletes prior to each Maccabiah—“all in their USA uniforms, ready to march in. Marching into Teddy Stadium is a really thrilling experience.”

And he has used his previous participation in the Maccabiah as an opportunity to “bring everybody” on a family trip. His wife, four children and 10 grandchildren now look forward to cheering him on in the 2025 Maccabiah triathlon. 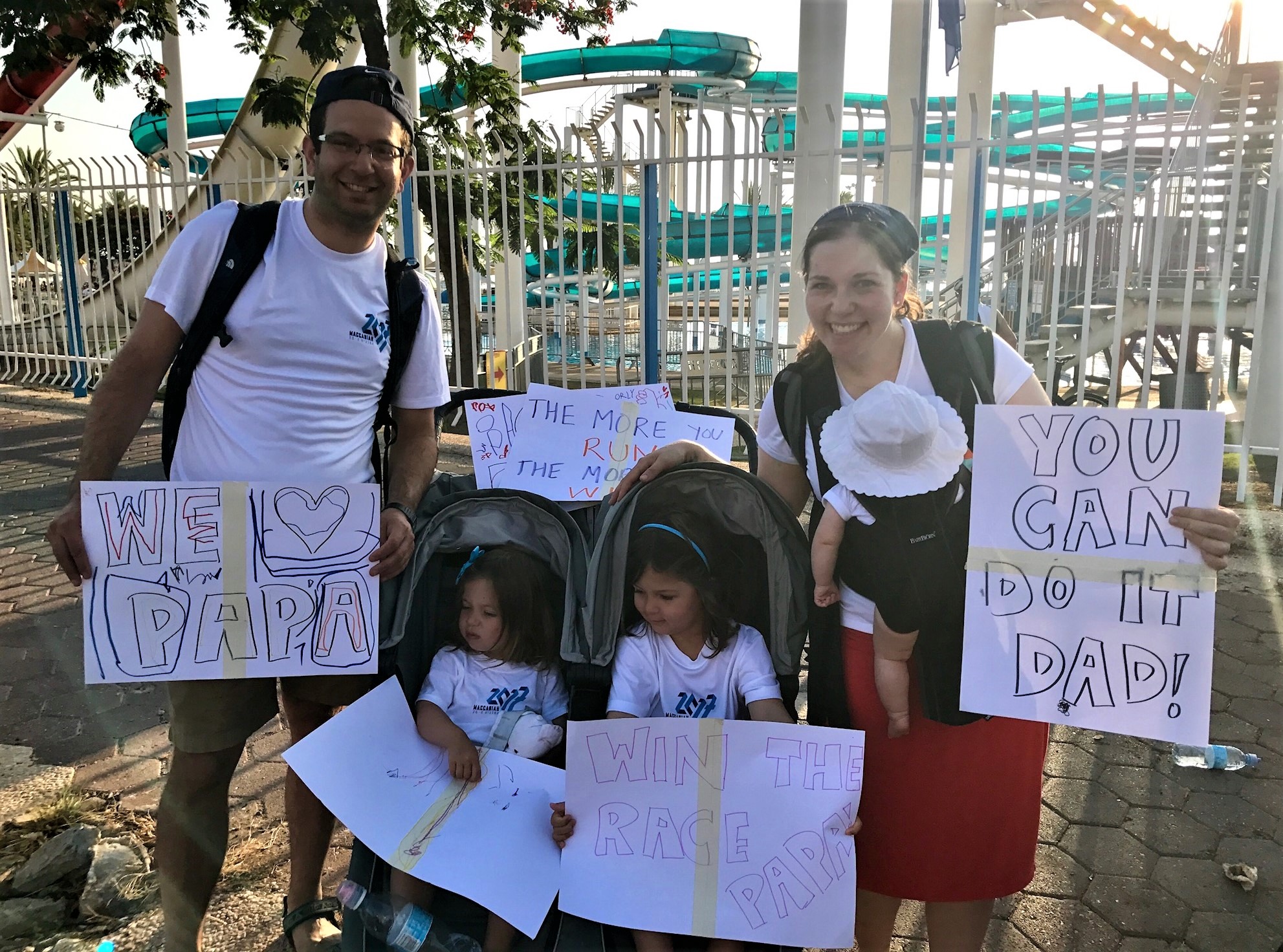 The family of Robert Sugarman cheers him on in his athletic adventures, even into his 80s. Credit: Courtesy.
Republish this article in your newspaper or website