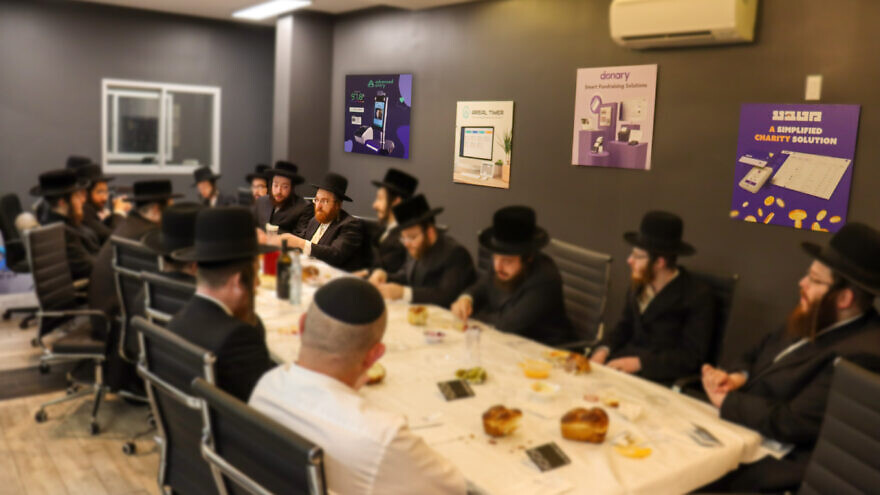 There are endless opportunities for charitable giving in the Jewish world. And with the biblical commandment to give maser—one-tenth of one’s income to charity—it means that there are also countless people seeking out those donations, whether it be in the yeshivahs, the synagogues or the streets.

Brooklyn, N.Y.-based haredi Orthodox entrepreneur Isaac Furth, founder of the C2P Group, says that he’s come up with a solution to make giving as easy as the tap of a card without the hassle of loose cash, haggling over amounts or dealing with paper receipts.

“We are a team of inventors, dreamers. And with all that HaShem gave me and my partner, Shimon Smilowitz and our entire great team, we want to make changes to the world. Not just another product or to sell sandwiches, but something out of the box, something that doesn’t exist. That’s what C2P does all day. We have six different projects, six subsidiary companies, and each will change the world in its own way,” Furth told JNS.

His pet project is Matbia, the Hebrew word for “coin” or “currency.” Launched this past spring, Matbia is a charitable platform, centered around a card held by the donor and a small card-reading machine in possession of an emissary (the agent acting on behalf of the charity and who collects the funds) that facilitates the transaction.

The card, which looks and feels like a credit card, actually has a credit-card chip in each of its corners. It allows the user to pre-program each corner with a different, pre-set amount that is donated when that corner is tapped on the machine.

“Just tap the corner you want to give, and it’s done. A donation with a credit card or cash will take a minute or more, but with a Matbia card, it takes one second,” crowed Furth, who says that Matbia already has thousands of users so far, even as his company holds off on extensive marketing while the product goes through its testing stage.

The platform virtually eliminates the awkwardness that comes when emissaries push for a higher-level cash donation.

“You give the person a $100 bill and ask for $90 change, and that guy tells you, ‘I need more money.’ It makes everyone feel painful. Even if you’re giving him $20, the guy is still unhappy because his organization needs the money,” said Furth, explaining that with the Matbia card, only the user is aware of the pre-set amounts in each corner, which can be reprogrammed at any time.

Additionally, Furth says that his Donary Pocket card reader that accepts the Matbia card is becoming recognizable in the neighborhoods where it is being utilized, primarily in the heavily Jewish neighborhoods of Williamsburg and Borough Park in Brooklyn, along with Monsey and Monroe in the New York suburbs, along with Lakewood, N.J.; Florida; and Canada.

He notes that the Donary reader, which also accepts credit, debit and other charity cards, can continue to function should Internet access go down. 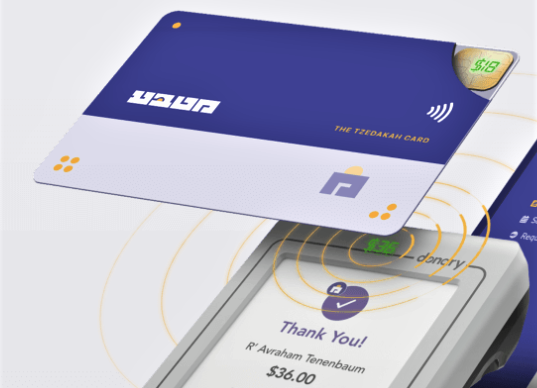 ‘Don’t have to deal with endless written receipts’

The limited use of smartphones in some haredi communities also makes a product like Matbia more attractive, according to Furth. Smartphones that otherwise could be used for electronic donations are treif among significant sectors of haredim based on rabbinical rulings dealing with spirituality.

Matbia also offers an online user portal, which gives a detailed analysis of transactions and balances, and allows users to set up recurring donations via the portal’s dashboard. The portal also makes it easy to track all donations for tax purposes. Like a more traditional credit or debit card, payments through Matbia are linked to a user’s bank account.

Furth says his company makes its cut by selling its card-reading devices for $299 and charging a monthly fee to the charitable organizations that utilize the Donary platform. He adds that hundreds of nonprofits have come on board already, seeing the upside of his product.

“They have the money digitally the second the card is swiped. They can’t lose it. They also don’t have to deal with filling out endless written donor receipts,” he says. Users automatically receive an electronic receipt with each donation, which Furth says also separates his product from competitors, who still largely deal in paper receipts.

Matbia is a donor-advised fund, meaning that all donations go to it and are then disbursed to the emissary’s group.

Furth says he is gunning for a wider market than New York-area, and that his company has fielded requests for devices from other U.S. locations, along with London and Israel.

“It goes word of mouth very fast,” he affirms. “We have a couple of new devices on the street almost every day.”