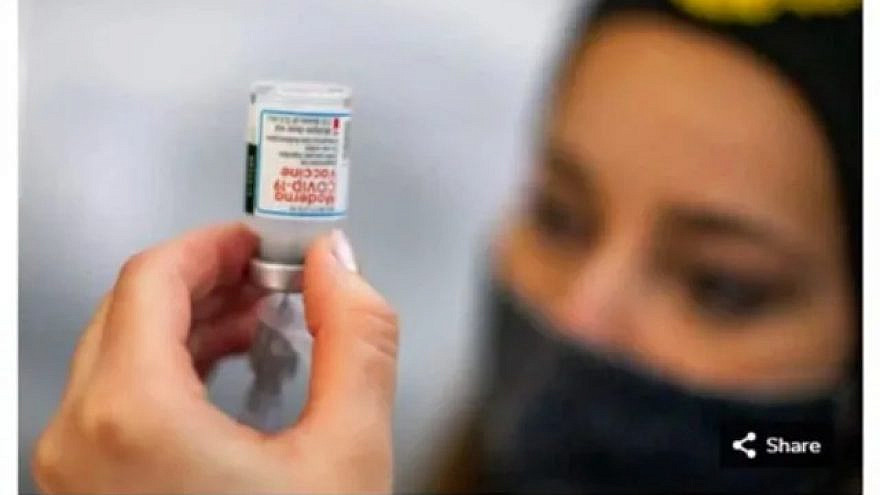 Screenshot of the photo that had an offensive caption that appeared in the “Asbury Park Press,” March 2021 Source: Screenshot.
Republish this article
484 WORDS
Spread the word.
Help JNS grow!
Share now:

(March 23, 2021 / JNS) A journalist from the Asbury Park Press, a Gannett-owned newspaper in Central New Jersey, is out of a job with the paper doing damage control after posting a photo caption last weekend that was deemed anti-Jewish and anti-woman.

The caption, which read in part “A f**king hot nurse, a total JAP, loads a dose of the Moderna COVID-19 vaccine … ,” appeared on the paper’s website over the weekend as part of a series of photos of how the faith community is helping vaccinate people. The description accompanied a photo of a nurse from the CHEMED health center in Lakewood, N.J., home to a large Orthodox Jewish population. “JAP” stands for “Jewish American princess.”

Paul D’Ambrosio, the newspaper’s executive editor, said on Monday that the photo ran with “an unapproved and offensive caption. The photo was removed on March 21 as soon as it was brought to our attention. As executive editor of the Asbury Park Press, I apologize deeply to women, the Lakewood Jewish community, all members of the Jewish faith, the Asian American community and all our readers.”

He added that “the words in the caption were totally unacceptable and in no way reflect the principles and practices of the staff of the Press and Gannett,” outlets that have “a long history of fighting for inclusiveness, diversity and women’s rights.”

Speaking during a regularly scheduled press conference about the ongoing coronavirus pandemic on Monday, Murphy said when he first heard about it, “I frankly didn’t believe it. I then read it with my own eyes, and it is unfathomable that someone could have written that privately, let alone that it was published. … I think, with all due respect, someone has to pay a price for that. That’s completely incredibly offensive. Even the apology missed the point as I understood the apology.”

Scott Richman, the Anti-Defamation League’s New York/New Jersey regional director, said “while we appreciate that Asbury Park Press has apologized and changed their procedures to avoid troubling incidents like these in the future, we are concerned that the cause may go beyond procedures and call on [the paper] to perform a full investigation. We hope to have meaningful conversations with APP as soon as possible to address any issues and ensure that no population is subjected to this kind of treatment in the future.”

D’Ambrosio posted an updated apology on Tuesday, trying to explain how the offensive caption came to appear on the website: “I thought someone had hacked our content management system. In reality, it was a reporter who admitted that he did a ‘stupid, stupid thing.’ ”

He continued, saying “this was an inexcusable act. The objectification of women and religious insults are intentional actions. The reporter in question is no longer with the company.”