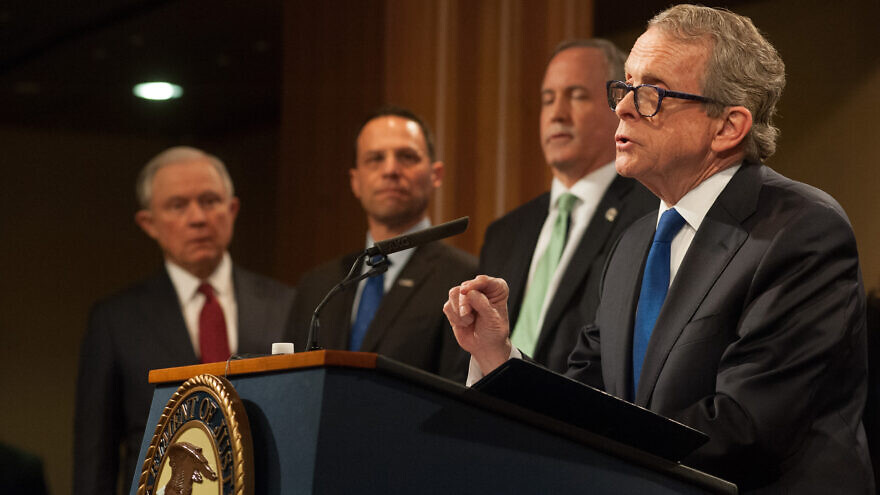 (December 6, 2021 / JNS) Ohio’s Republican Gov. Mike DeWine issued a strong statement recently against anti-Semitism on college campuses in a letter to all 111 college and university presidents in the state calling for them to take a serious look at how Jews are treated at their campuses.

“A student’s time at a college or university is one of intellectual challenge—an opportunity to broaden one’s outlook and learn new ideas. It is also a time of personal growth, meeting people who come from different backgrounds and volunteering with worthy organizations to advance important issues. Our campuses strive to be safe places to study, grow and develop,” wrote DeWine in the letter on Nov. 29. “No student should be afraid on a college or university campus, especially because of their race or religion. Sadly, for too many of our Jewish students today, that is not the case. Cases of anti-Semitic and anti-Israel sentiments have been reported on our campuses here in Ohio and nationally.”

DeWine cited a Hillel International report that Jewish students, faculty and staff at universities throughout the United States are at risk of facing hate and harassment for being Jewish.

“We cannot stand by and accept these alarming trends. My administration will be working closely with Chancellor [of the Ohio Department of Higher Education] Randy Gardner, our Jewish community partners, and each of you in the days and weeks ahead to develop comprehensive action items to collectively confront the issue,” wrote DeWine. “I look forward to receiving your thoughts and ideas about how to make our campus life inclusive and safe for everyone.”

He asked letter recipients to take three steps to help develop a plan of action moving forward. That includes reaching out to on- and off-campus Jewish communities at every college and university, and work with them to ensure a safe environment online and off; direct campus chiefs of police and public safety directors to work with Jewish communities and local and state law enforcement to ensure that services and other celebrations are safe and uninterrupted; commit personally to the issue and find ways to speak out against anti-Semitism; and urge their campus communities to protect and promote free, open and civil debate.

“Together, we must strive to create a culture on our campuses that does not tolerate anti-Semitic and anti-Israel sentiments or any other type of discrimination,” concluded the governor. “Please join me in working to ensure that every institution of higher learning in Ohio is doing what it can to challenge and address these very serious issues.” 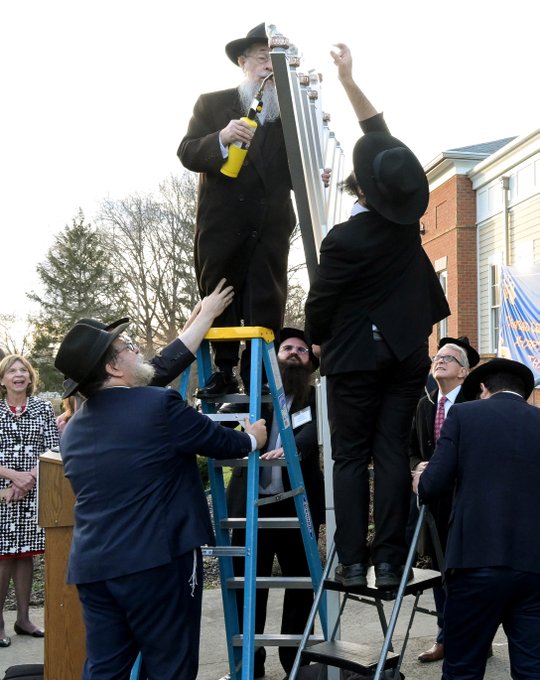 Ohio Gov. Mike DeWine and his wife, Fran, attend a Hanukkah menorah-lighting at the Lori Schottenstein Chabad Center in the capital city of Columbus on Dec. 2, 2021. Source: Gov. Mike DeWine/Twitter.

‘Even faculty and staff are nervous’

Howie Beigelman, executive director of Ohio Jewish Communities, said that he and a group of Jewish communal leaders representing some of the state’s Jewish Federations and Jewish Community Relations Councils met with DeWine in August, discussing with him at length about the rise of anti-Semitism in the United States, pointedly on college campuses.

DeWine internalized the information and spoke about it at the lighting of a menorah with Chabad Columbus on Dec. 2, saying that Ohio residents need to be vigilant against anti-Semitism.

No single incident in Ohio prompted the letter.

“There have been things that have been happening on the campuses and around campuses that we’re certainly nervous about,” said Beigelman. “The general climate right now on campus is something that students are nervous about being openly Jewish. Even faculty and staff are nervous sometimes. So it’s affecting the broader campus conversation.”

Part of the conversation the communal leaders had with the governor included a discussion of how anti-Semitism and anti-Israel sentiment can often enable one or the other, according to Beigelman.

“He knows it’s out there. … He doesn’t know why it’s there. He’s done things in the past, on security and funding and things like that. But he said, ‘One thing I can do is I can speak up and I can speak out, and I’m going to do that,’ ” said Beigelman.

Stephanie Hausner, chief program officer of the Conference of President of Major American Jewish Organizations, said that the letter “may be the strongest public statement from an elected official in the United States regarding campus anti-Semitism.”