(March 22, 2021 / JNS) For more than 10 years, Egypt, Sudan and Ethiopia have been holding periodic negotiations aimed at reaching a water arrangement that will govern the flow of the Blue Nile into Sudan and Egypt in the wake of the planned 2022 inauguration of the mammoth Grand Ethiopian Renaissance Dam (GERD). Once complete, GERD will be the biggest hydroelectric power facility in Africa and the seventh-largest in the world.

The massive dam is being built 12 miles from the Sudan-Ethiopia border on the Blue Nile, which provides 85 percent of the water to Egypt downstream (the White Nile provides the remaining 15 percent). The 6,450-megawatt hydroelectric power project was to have been inaugurated in 2018 but was delayed due to budgetary constraints and mismanagement.

With the prospect of a stalemate in the negotiations, barely four months before the second filling of the dam’s reservoir in July 2021, tensions are steadily mounting between Egypt and Sudan on one side and Ethiopia on the other. Egypt sees the dam as an “existential threat” to millions of Egyptians. Egyptian President Abdel Fattah el-Sisi warned on March 27, 2021: “We reject the policy of imposing a fait accompli and extending control over the Blue Nile through unilateral measures without taking Sudan’s and Egypt’s interests into account.”

The specter of military confrontation has been openly presented by Egypt and Sudan as a last-resort option to stop Ethiopia from going forward with the inauguration.

The new energy source is essential for Ethiopia; according to the World Bank, only 44 percent of Ethiopians have access to electricity. Once the dam is operational, Ethiopia expects to export energy to the neighboring states of Kenya, Sudan and Djibouti. 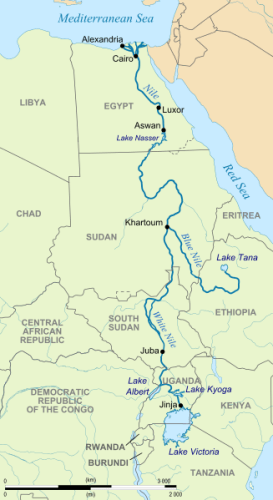 The paths of the White and Blue Nile Rivers (Wikipedia)

Construction on the $6 billion dam began in 2011 when Egypt’s attention was focused on domestic unrest of “the Arab Spring.” It took a ground-breaking ceremony in Ethiopia to signal to the Egyptians that the Ethiopian government was serious about the project. The first reactions were a mixture of panic and incredulity, due to the magnitude of the project—six times the output of energy of the Aswan Dam, the equivalent of six 1000-megawatt nuclear power plants—and a threatened water shortage unprecedented in 7,000 years of Egyptian history.

Since construction began, Egypt has unsuccessfully tried to negotiate with the Ethiopians to slow the filling of the dam’s mammoth reservoir, which, once full, will contain between 74 billion to 100 billion cubic meters of water. The Egyptians ask that the reservoir-filling process be carried out over a minimum of 10 years and that Ethiopia control the Nile water flow so as to minimize the impact on Egypt.

The Ethiopians, on the other hand, plan a three-year reservoir-filling process. This would deprive Egypt of 33 billion cubic meters out of the 55.5 billion allowed each year according to assorted agreements signed in the past (1929 and 1959) between Ethiopia and the 11 countries downstream of it on the Nile. Such a deficit would mean, for instance, that each Egyptian would receive 600 cubic meters annually instead of 2,500, and would transform Egypt into a water-poverty-stricken area. The United Nations has decreed that water sustenance should stand at 1,000 cubic meters per year per individual.

Moreover, Egypt argues that each two percent loss in its water share will result in the desertification of almost 200,000 acres. Finally, with the beginning of the filling of the reservoir, the Aswan Dam’s water level will likely drop—in the best case—to 170 meters (eight meters lower than today’s level). In a worst-case scenario, the level would drop to 168 meters, although not enough to jeopardize the production of electricity.

Anticipating the coming crisis, in April 2018, the Egyptian parliament enacted a law forbidding the growth of water-intensive plants such as rice. As a result, for the second consecutive year, the area dedicated to rice growth in Egypt has been reduced from 1.8 million feddans to 724,000 feddans (1 feddan equals 1.037 acres). In all nine Egyptian governorates, farmers were encouraged to grow three alternative rice species that demand less water. 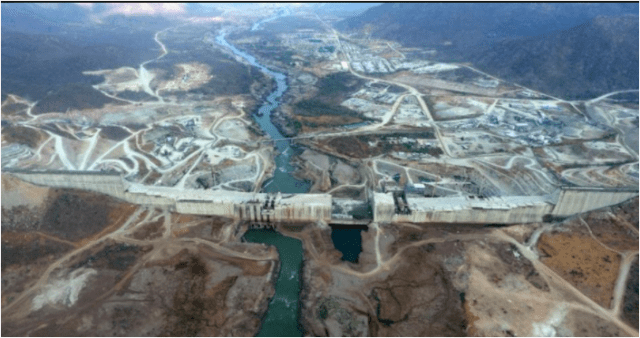 Finally, the Egyptian government plans to build additional dams on the Nile and to erect a series of small dams meant to capture floods and rainfall, but this will not make up for the loss Egypt will sustain with the beginning of the filling of the GERD reservoir.

In the meantime, Egypt and Sudan are pressing for a diplomatic outcome. Both countries have suggested convening a commission comprising representatives of the United Nations, the United States, the European Union, and headed by the chairman of the African Union, President Félix Tshisekedi from the Democratic Republic of Congo. The commission would guide the parties in reaching an agreement before the beginning of the second filling of the reservoir. Ethiopia is opposed to the idea, asking to limit the negotiations only to the parties involved. Tshisekedi recently sent a delegation to Ethiopia, Sudan and Egypt to try to reach an agreement.

Egypt’s frustration with the Ethiopians is growing, with some commentators, such as the former minister of irrigation and water resources, Mohamed Nasr el-Din Allam, charging Ethiopia with “bullying amid an international silence.” He claims Ethiopia’s position represents foreign entities who aim to diminish Egypt’s regional influence by reducing its water resources.

With this background, Egypt has been contemplating the possibility of taking military action. Under President Morsi, the Egyptian national security council’s secret discussions in June 2013 were accidentally televised, including a proposal for commando attacks against the Ethiopian dam. The Egyptian government apologized, and Morsi’s cabinet declared that the two countries’ relationship was based on “good neighborliness, mutual respect, and the pursuit of joint interests without either party harming the other.”

However, on March 2, 2021, Egypt and Sudan signed an agreement on military cooperation, which was a result of an intense series of visits of high-ranking officials from both countries. The agreement was signed at the conclusion of the visit to Sudan of the Egyptian military chief Lt. Gen. Mohammed Farid, and includes definite hints that the Ethiopian issue was the issue discussed, including ways to “secure the borders.”

Unusually for an agreement signed by military men, the deal stipulated the prerequisite condition of securing an agreement on the Nile waters before the beginning of the second filling of the GERD reservoir, due in July 2021. The implicit threat to Ethiopia was understood: If Addis Ababa chose to continue its path without reaching an agreement, it would be considered by Cairo and Khartoum as a direct threat to the water security of both countries. Sudan’s Prime Minister Abdullah Hamdouk argued in February that the Ethiopian dam poses a threat to the safety and security of more than 20 million of his country’s citizens.

It is noteworthy that in recent years, Egypt has been building and refurbishing a military mega-base in Ras Banas on the Red Sea shore, almost adjacent to the border between Sudan and Egypt and opposite Saudi Arabia’s Medina on the other side of the Red Sea. The base, located on the approach to the southern entrance to the Suez Canal, is presented as a means of projecting Egyptian air and naval power to protect its allies, Saudi Arabia and the Gulf States, and to counter Iranian, Turkish (and Israeli) power in the Red Sea. However, it cannot be ignored that the military complex is within reach of the Eritrean and Ethiopian territories. 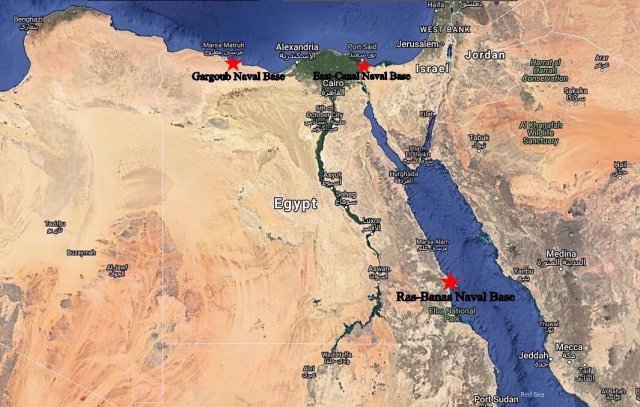 In the meantime, events on the ground have accelerated the crisis between Ethiopia and the Egypt-Sudan alliance. When the war in Tigray started on Nov. 4, 2020, some Ethiopian army garrisons stationed in the Al Fashaqah triangle abandoned their bases and joined the Ethiopian war effort. The triangle is 97 square miles of fertile land claimed by both Sudan and Ethiopia as part of their respective territory in a 100-year dispute, but occupied for more than 25 years by Ethiopians (Amhari) and protected by federal Ethiopian troops and local Amhari militias, west of the Tigray territory.

By deserting their bases, the soldiers left the area empty of Ethiopian army units and allowed the Sudanese army to move in. The attempt to retake the area by the Amhara militias failed after clashes occurred with the Sudanese army, which reinforced its positions in the area. Since then, intermittent violent and deadly incidents have erupted between Ethiopian and Sudanese troops, with Ethiopia claiming that the Sudanese side (backed by Egypt) is stirring the situation on the ground. [For more information, see Al Jazeera Inside Story.]

In fact, the Al-Fashagah issue has given both Sudan and Egypt an important bargaining chip in the stand-off over GERD. This fact allows Egypt, for the time being, to refrain from direct military action against Ethiopia. As a result, a military confrontation at this point seems unlikely, even though both Egypt and Sudan are interested in weighing their military options. The most plausible course of action would be to secure international support and try to convince the Ethiopians to accept a compromise.

In the meantime, until the deadline of July 2021, consultations may try to reroute the Blue Nile River to alternative channels that would cause only minor damage to Egypt and Sudan rather than the catastrophe presaged by the opponents of the project. Reaching July 2021 and the beginning of the second filling of the reservoir without an agreement would be tantamount to a declaration of war by Ethiopia on Egypt and Sudan. This is a scenario that the three parties would like to avoid, despite the fact that it is underplayed at this stage. Inevitably, it will be necessary to mobilize international opinion and allow room for diplomacy.