(June 19, 2022 / JNS) On June 17, 1967, 55 years ago on Friday, then-Israeli Defense Minister Moshe Dayan made one of the most fateful decisions in the history of the State of Israel and the Jewish people. Just days after the end of the Six-Day War, Dayan agreed to establish a new “status quo” for the Temple Mount. Fearing open discussion of the decision, Dayan’s agreement was not positively ratified by the government of the day—or by any government since.

The Temple Mount is Judaism’s holiest site. It is the biblical Mount Moriah, where Abraham was to sacrifice his son Isaac. It is the site at which King Solomon built the first Jewish Temple, destroyed in 586 BCE. It is the site at which the Jews, 70 years later, built the second Temple. As a pamphlet for tourists published in 1924 by the Supreme Muslim Council openly declares: “This site is one of the oldest in the world. Its sanctity dates from the earliest (perhaps from pre-historic) times. Its identity with the site of Solomon’s Temple is beyond dispute” (emphasis added).

The Temple Mount is also holy to Muslims, who refer to it as Al-Haram Al-Sharif (“The Noble Sanctuary”). The Muslims added two dominant structures to the site: The Dome of the Rock, built in 691 C.E., that stands in the middle of the mount, directly over the ruins of the inner sanctuaries of the two temples; and the Al-Aqsa Mosque, built in 693 C.E., in the southwestern corner of the mount.

In the 1990s, the Waqf excavated the area known as “Solomon’s Stables,” turning it into a new mosque, referred to as the El-Marwani Mosque. It is located 12 meters (40 feet) below the current courtyard; the Supreme Muslim Council pamphlet notes that the area of the Stables “dates probably as far back as the construction of Solomon’s Temple. According to Josephus, it was in existence and was used as a place of refuge by the Jews at the time of the conquest of Jerusalem by Titus in the year 70 A.D.” It was Titus who destroyed the second temple. 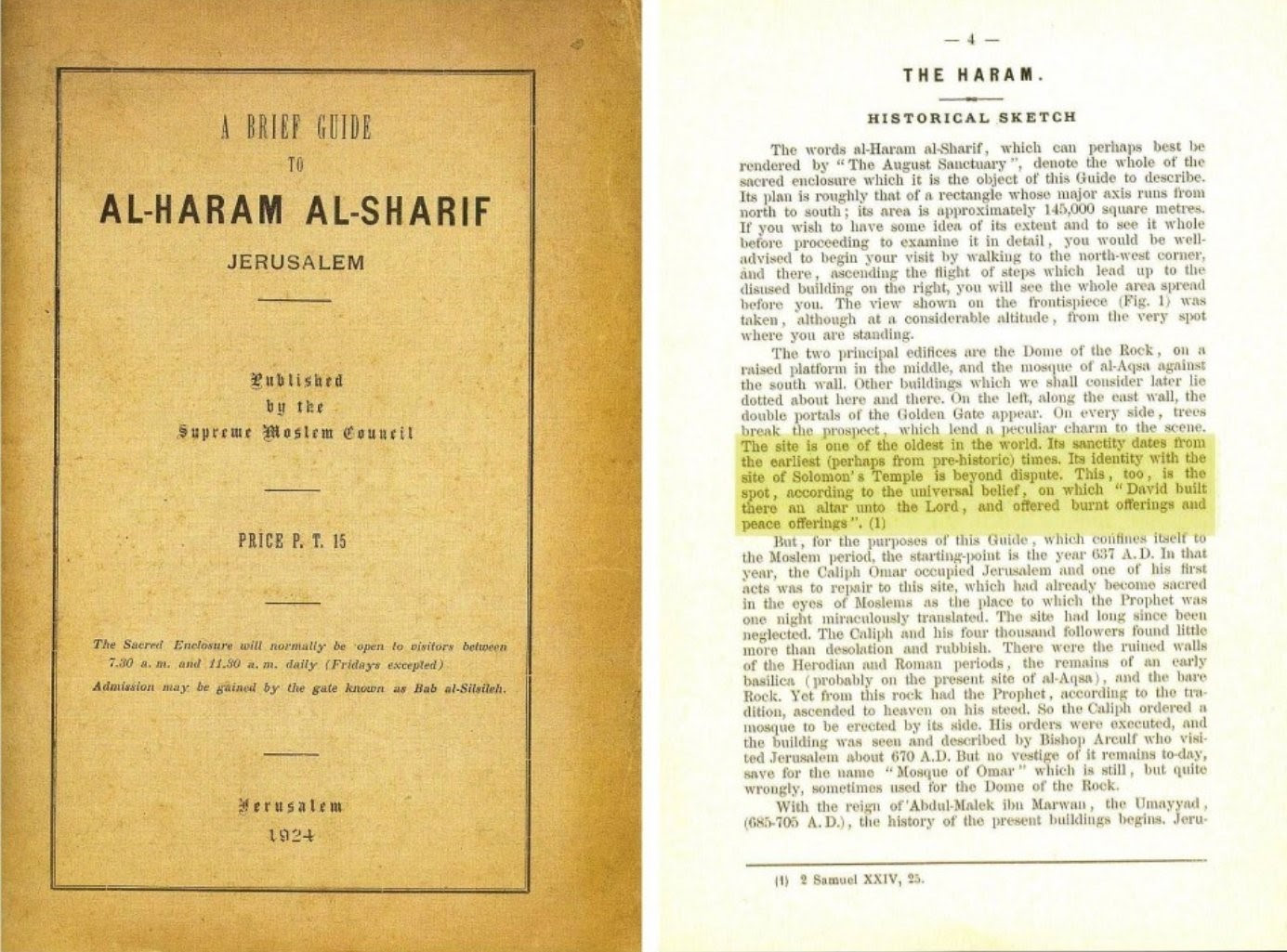 After Israel liberated Jerusalem and the Temple Mount from Jordan, which had illegally occupied it from 1948 to 1967, a decision needed to be made regarding access to the site.

Seeking to placate the Muslims after their unequivocal defeat, Dayan offered the Jordanian Waqf control of activities within the walls of the mount itself, while Israel would be responsible for external security and public order. Dayan further conceded that Muslims would be granted free access to the site, and that while there would be no limitations on the number of Jews entering the mount, they would not be allowed to pray there.

The argument has been made that in ceding the internal activities on the mount to the Waqf, Dayan sought to neutralize the religious ingredient of the Israeli-Arab conflict. However, secret documents released by the Israeli archives and reviewed by Palestinian Media Watch expose the authentic and official “status quo” instituted in 1967.

On Aug. 15, 1967, to mark the day which Jews commemorate as the day of the destruction of both temples (the ninth of the Hebrew month of Av) then Israel Defense Forces Chief Rabbi Major General Shlomo Goren had arranged that Jews would go up to the Temple Mount to conduct prayers.

A meeting of the Israeli Ministerial Committee for Safeguarding of the Holy Places convened on Aug. 13, 1967, to discuss Rabbi Goren’s plans. The committee specifically rejected a suggestion to ban Jewish prayer on the Temple Mount, preferring to instruct the head of the committee to meet with Rabbi Goren and inform him that he should desist from arranging prayers there. A similar instruction was given to Dayan to convey to Rabbi Goren through the IDF Chief of Staff. Interestingly, the written summary of the decision taken in the meeting is dated Aug. 16, 1967. The original protocol of the decisions of the meeting and its translation appear below.

Reneging on former Prime Minister Menachem Begin’s pre-election promises to allow Jews to openly pray on the mount, no change was made.

For certain periods, the Temple Mount was entirely closed to Jews, predominantly during and after bouts of Arab violence and terror. In contrast, the site is almost never closed to Muslims, except in exceptional circumstances, such as in July 2017, when the mount was closed for a few days after terrorists murdered two Israeli policemen there.

While no Israeli government ever ratified Dayan’s agreement, to this day, the “status quo” on the Temple Mount is that the internal part of the site is run by the Waqf and Israel is responsible for the external security and maintaining public order. Muslims are allowed to freely visit the site, in unlimited numbers, subject to fine-tuning to take into account safety and security precautions. Jews are only permitted to enter the site for limited hours of the day, and in limited numbers, and are mostly not allowed to conduct individual or communal prayers.

Since its creation, the Palestinian Authority has continuously and consistently used the Temple Mount as a means to inflame religious fervor and as a rallying call for violence and terror. Repeatedly claiming that Israel is planning to destroy the “Al-Aqsa Mosque,” which it deceptively defines as being 144 dunams (36 acres) in area—i.e. the entire area of the Temple Mount—the P.A. misleads the Palestinians, and indeed the entire Muslim world, into falsely believing that “Al-Aqsa is in danger.”

While documents and 55 years of reality clearly demonstrate that Israel has no intention to even undermine, let alone destroy, any part of the site, the P.A. still claims, as shown by PMW, that “Since the June War (i.e., the Six-Day War in 1967)—we are talking about its 55th anniversary—there are [Israeli] intentions to destroy the Al-Aqsa Mosque and build the alleged Temple” (Official P.A. TV, June 6, 2022).

For the P.A., which has no say whatsoever regarding the manner in which the site is run, allowing Jews to pray on the Temple Mount would be tantamount to declaring World War III. Similar empty rantings were also made by the P.A. before the United States moved its Israeli embassy to Jerusalem.

A lot has changed since 1967. Over the past few decades, most western societies have developed and adopted a much more heightened sense of personal freedoms and rights, including freedom of religion. The idea that the decision of one person alone—Moshe Dayan—could prevent all Jews from praying at Judaism’s most holy site would, today, be inconceivable. At the same time, over the years, the desire and willingness of Jews to enter the Temple Mount has increased dramatically.

Since it is unreasonable to believe that Muslims are inherently incapable of recognizing the legitimate rights of Jews to pray on the Temple Mount and expressing the religious tolerance required, maybe the time has come for Israel’s government to finally clarify what exactly the “status quo” on the Temple mount was, is and should be.

The following is the protocol of the decisions of the Ministerial Committee for Safeguarding of the Holy Places, as well as a translation into English: 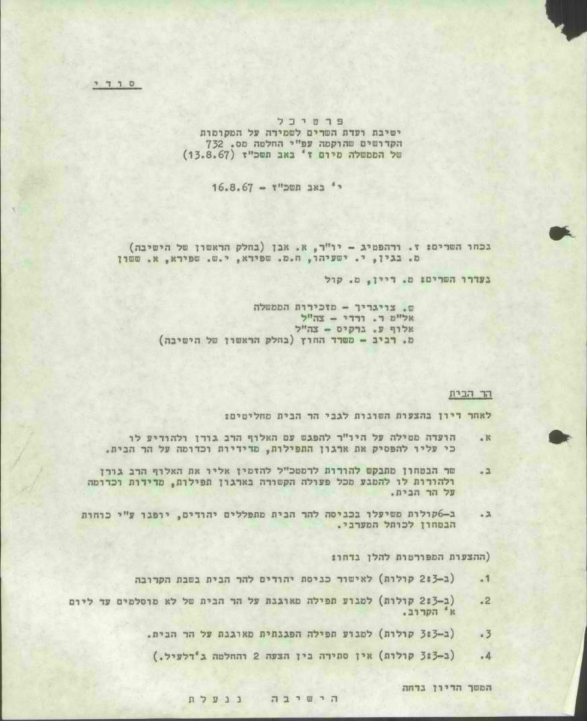 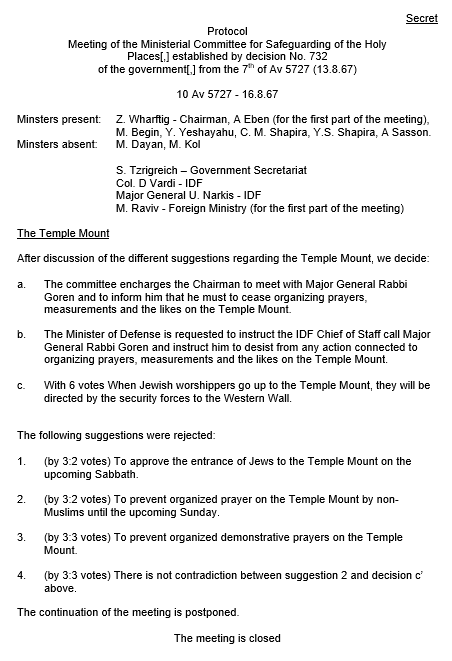