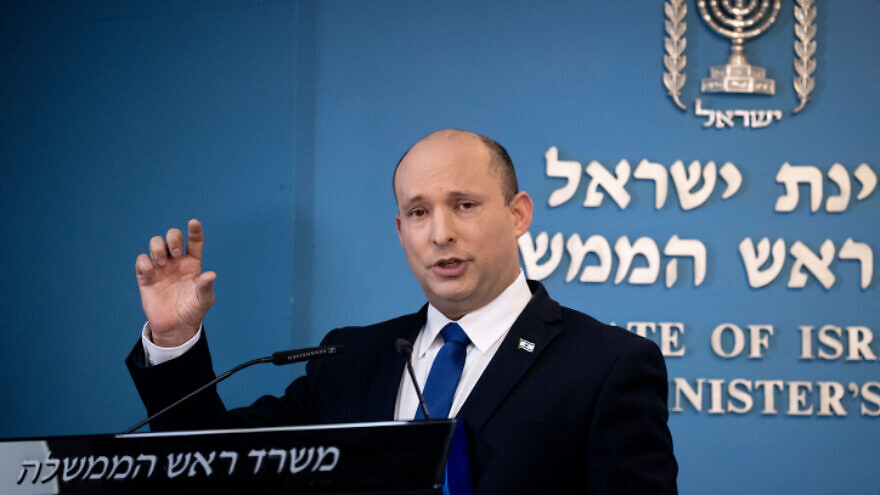 (August 20, 2021 / JNS) Israeli Prime Minister Naftali Bennett will walk the red carpet into the White House on Aug. 26, where he will meet U.S. President Joe Biden. One major issue the two leaders intend to discuss is, not surprisingly, Iran. Another major issue is the establishment of a Palestinian consulate in Jerusalem. And therein lies the problem.

Dore Gold, president of the Jerusalem Center for Public Affairs and former Israeli Foreign Ministry director-general, told JNS that the United States “is going through an almost traumatic foreign policy setback in Afghanistan with implications for the entire Middle East. Now is not the time to experiment with new ideas in the peace process.”

“The main effect of the Afghan withdrawal is not that it occurred, but rather how the U.S. handled it,” he said. “Many American allies from the U.K. out to the Far East are raising serious questions about America’s handling of foreign policy.”

While White House officials may understand that advancing the peace process now would be counterproductive, Gold noted that “there is always a cottage industry of so-called experts who have proposals they want their bosses to advance when an Israeli prime minister comes to town.”

Gold questioned why the United States would establish a Palestinian consulate in Jerusalem on Agron Street, which has been under Israeli sovereignty since 1949.

“Consulates and embassies are established on the sovereign soil of the country that is being represented, so this touchy move could have implications of keeping Jerusalem united,” he said.

Part of the problem with such a move, according to Gold, is that it also sends a signal to other countries who might view this as a green light to establish their own embassies in what they perceive to be a Palestinian part of Jerusalem.

“This may be a trial balloon,” said Gold. “It may be something which some Middle East experts in Washington may want to advance, but it has huge implications for the future and it is something Israel will have to resist with all its diplomatic strength.”

Gold also noted that Bennett’s constituency would have a “very serious problem” with such a proposal.

“The unity of Jerusalem is such a fundamental principle,” he said. “It’s a consensus issue.” 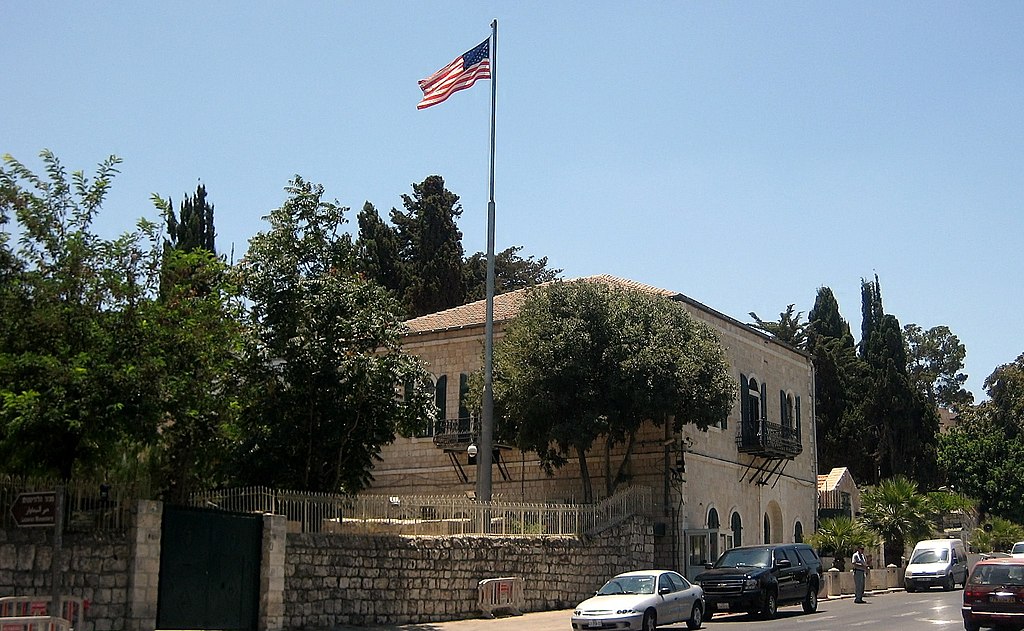 ‘The majority of the people in Israel oppose this decision’

Knesset member Nir Barkat of the Likud Party and the former mayor of Jerusalem slammed the government over its intention “to allow the establishment of an American consulate for the Palestinians in Jerusalem, thus establishing Jerusalem as the Palestinian capital without negotiations.”

By opening a Palestinian consulate in Jerusalem, it is clear that America’s intention “is to establish facts on the ground” and “to promote the establishment of Palestine with Jerusalem as its capital,” Barkat said in a statement to JNS.

“This is a goal Israel cannot agree to,” he said. “There is no other capital city in the world where the Americans have opened two embassies. After all, there is an American embassy in Jerusalem, and it can provide consular services to anyone who needs it.”

Barkat continued, “The majority of people in Israel oppose this decision. The Israeli government must say in a clear voice to our friends in the Biden administration that, with all due respect, Jerusalem is the united capital of Israel and we will not allow the establishment of an embassy that will make Jerusalem the capital of Palestine. The Biden administration should respect public opinion in Israel, which for the most part, opposes the move.”

Bar-Ilan University’s Professor Eytan Gilboa, an expert on U.S. policy in the Middle East, told JNS, that Biden “is not going to embark on any new initiative with the Palestinians,” but the president does want to open an American consulate in Jerusalem for the Palestinians and is applying pressure on Israel to comply.

“The U.S. needs Israeli permission to do that,” he explained. “Biden is applying a lot of pressure on Bennett to agree and it will be extremely difficult for Bennett to do so.”

“A way out of it,” Gilboa suggested, “is to establish the lowest possible diplomatic representation. … Bennett may agree to that, providing it will be completely under the control and supervision of the embassy.” 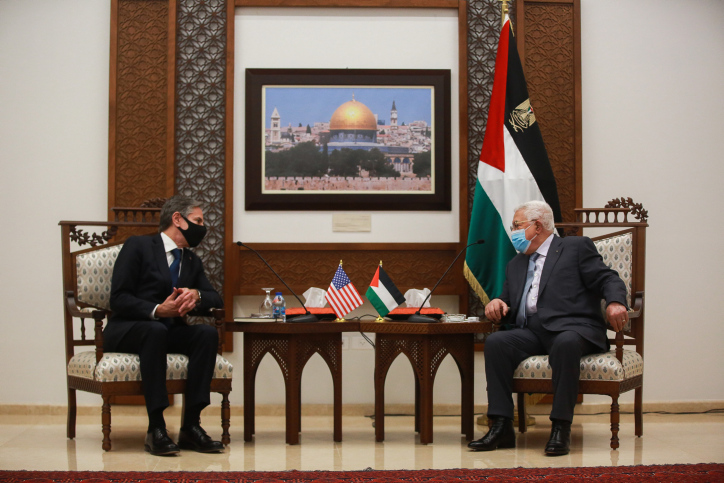 U.S. Secretary of State Antony Blinken meets with Palestinian Authority leader Mahmoud Abbas in Ramallah, on May 25, 2021. Photo by Flash90.

Recent reports have indicated that despite the pressure, the Biden administration may hold off on any moves that could endanger the stability of Bennett’s government, such as the consulate, until the Israeli government is able to pass a budget, likely in November.

Eugene Kontorovich, a scholar at the Kohelet Forum think tank in Israel and professor of law at George Mason University, told JNS that “under international law, given Israeli sovereignty over Jerusalem, the U.S. will need a variety of Israeli permissions to comply with the requirements of the Vienna Convention on the Law of Treaties” in order to open a Palestinian consulate in Jerusalem.

“The U.S. will pressure Israel to make concessions … the very opening of the consulate is designed to have implications about the status of Jerusalem,” he said.

Recent headlines in Israel indicate that the government is also considering allowing Palestinian construction in “Area C”—the area of Judea and Samaria that is under Israeli control—and restricting Jewish construction.

Gold warned against the idea, questioning the logic of modifying the Oslo Accords when the Palestinians “have not adhered to their responsibilities.”

“We don’t want to veer away from written agreements, particularly when the Palestinians have flagrantly violated their Oslo commitments,” he said, adding that the Palestinians “still refuse to cease payments to families of terrorists who engaged in terrorism against Israelis.”

Israel’s main objective is ‘not to be left out’

Unlike the negotiations that led up to the 2015 Iran nuclear deal, when Israel was sidelined and left uninformed, this time Israel’s main objective is “not to be left out,” said Gilboa.

“This represents an effort by the two sides to coordinate and consult as much as possible about the major issues of the region,” he said. 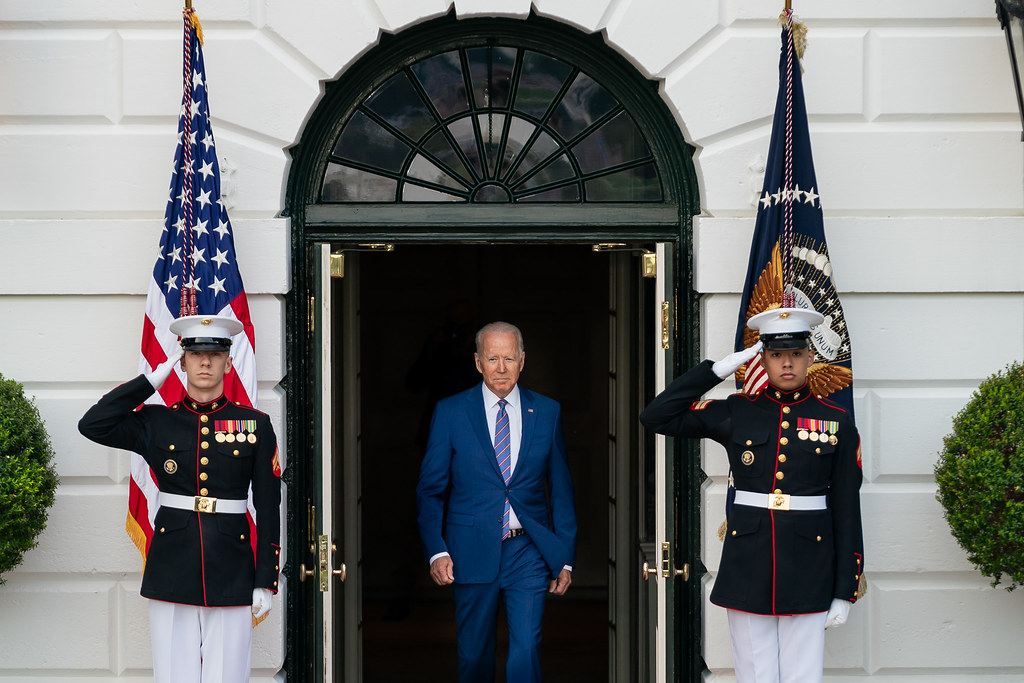 U.S. President Joe Biden arrives to deliver remarks to essential and frontline workers and military families attending the Fourth of July celebration on July 4, 2021, on the South Lawn of the White House. Credit: Official White House Photo by Katie Ricks.

From Washington’s perspective, with Iran announcing its progress in enriching uranium closer to weapons-grade level, and a so-far failing effort to get Iran back into compliance with the nuclear deal, the U.S. is concerned about the prospect of an Israeli military attack on Iran.

At the same time, Bennett may ask Biden what he will do about Europe’s stance on Iran. Part of the problem, in Gilboa’s estimation, is that Biden is trying to revive diplomacy with traditional allies, especially Western European and E.U. countries, many of which are “timid” when it comes to Iran.

The European position, said Gilboa, “is a constraint on Biden.”

Michael Doran, a senior fellow at the Hudson Institute, told JNS that “Bennett needs Biden more than Biden needs him.”

As the right-wing leader of a coalition government dominated by centrist and left-wing parties, Bennett is “eager to prove that he can deliver better relations with Biden than his predecessor and rival [former Israeli Prime Minister Benjamin Netanyahu],” he said.

Doran noted that Netanyahu “accuses the Bennett government of having agreed to a ‘no surprises’ policy with Washington, effectively giving the Americans veto power over Israeli actions designed to sabotage Iran’s nuclear program and to contain its militia network on the ground.”

“Bennett denies that such a policy exists,” he said, but “even if his denial is accurate, formally, the necessity that he feels to get along with Biden means that the ‘no surprises’ policy is an informal reality.”

On the issue of Iran, “Bennett’s need for a frictionless meeting will cost him most dearly,” added Doran.

“Washington and Jerusalem remain miles apart both on the nuclear file and on the malign activities of the Iranians in the Arab world,” he said, “with the Americans eager to accommodate Iranian power and the Israelis convinced that Iran must be confronted.”