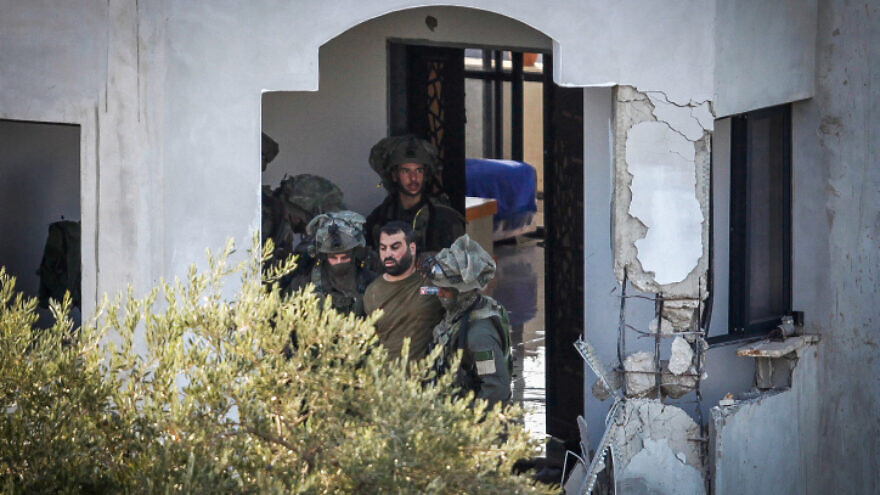 Israeli security forces arrest a Palestinian gunman during a raid on a building in the village of Deir al-Hatab, near Nablus, Oct. 5, 2022. Photo by Nasser Ishtayeh/Flash90.
Spread the word.
Help JNS grow!
Share now:

(October 6, 2022 / JNS) One Palestinian gunman was killed and several wounded on Wednesday during a firefight that erupted during an Israeli arrest raid in the the town of Deir al-Hatab, near Nablus.

Israeli forces had entered the town to apprehend Hamas member Salman Amran in connection with a terror attack near Itamar on Sunday, according to the Israel Defense Forces. Amran has served multiple prison sentences for plotting attacks on Israelis.

According to the IDF, Amran opened fire on Israeli forces after they surrounded his residential building. The troops returned fire, deploying fragmentation grenades and a bulldozer. Amran’s brother, who was outside of the suspect’s apartment, was wounded in the exchange, according to the military.

At this point, Palestinian gunmen in multiple locations opened fire on the IDF forces, who returned fire, killing one gunman, the IDF said in a statement.

The Palestinian Authority-run WAFA news agency named the casualty as Alaa Nasser, stating that he died in a hospital in Nablus, known in Israel as Shechem.

Following the exchange of fire, Amran surrendered, according to the IDF.

WAFA also reported that a cameraman from Palestine TV was shot in the hand, and that an additional person was hit in the leg. Both are in stable condition, according to the report.

The IDF said it was also aware of reports of two media personnel having been wounded in the area of the firefight, but had no further information. It warned about the presence of noncombatants in battle zones.

Police officers fired on the vehicle, wounding the driver. He was apprehended at a nearby checkpoint. A policeman sustained minor leg wounds, likely due to friendly fire according to an initial IDF assessment, and was airlifted to hospital for additional treatment.