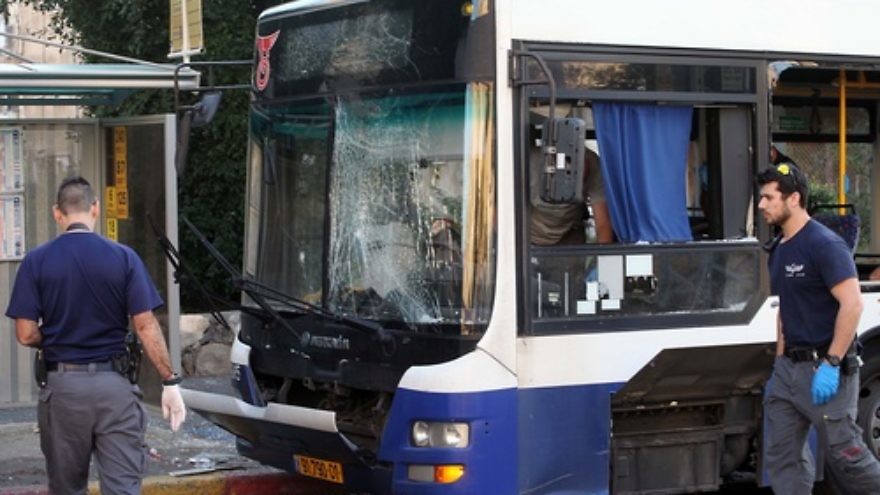 Israeli police and rescue personnel at the scene of an explosion on a passenger bus in Bat Yam, near Tel Aviv, on Dec. 22, 2013. The bomb was part of a recent upsurge in Palestinian terrorism that runs parallel to Israel-Palestinian conflict negotiations. Credit: Gideon Markowicz/Flash90.
Republish this article
1102 WORDS
Spread the word.
Help JNS grow!
Share now:

(December 29, 2013 / JNS) Upsurges in Palestinian terrorism have often accompanied progress—and eventual breakdowns—in Israeli-Palestinian conflict negotiations over the past 20 years. The latest round of talks, brokered by U.S. Secretary of State John Kerry, is proving to be no different.

Palestinian attacks on Jewish military and civilian targets have been on the rise since a Lebanese sniper killed an Israel Defense Forces (IDF) soldier in mid-December. A civilian hired by the IDF was murdered Dec. 24 while repairing the Israel-Gaza border fence. A bomb exploded on an evacuated bus in the heavily populated city of Bat Yam, just south of Tel Aviv, on Dec. 22. A police officer was stabbed and moderately injured Dec. 23 while directing traffic at one of the West Bank’s busiest intersections along the Ramallah bypass road in Samaria, and Jewish drivers have reported several potentially deadly stoning attacks. In one of several recent Palestinian rocket attacks from Gaza that provoked Israeli retaliatory airstrikes, one rocket landed near a bus stop used by schoolchildren near the city of Ashkelon.

“Unfortunately and regrettably, it’s quite typical to the junctures in which political decisions and painful compromises are expected to be taken by the negotiating parties,” Gilead Sher, who served as chief of staff and policy coordinator to Israel’s former prime minister and defense minister Ehud Barak, told JNS.org regarding the uptick in Palestinian terror.

“Time and time again, we see the leash loosening for these kinds of acts, that typically characterize the Palestinian response to the kind of progress that seemingly is what is happening within the negotiating room,” said Sher, who was a chief peace negotiator at the Camp David summit in 2000 and at the Taba summit in 2001, in addition to taking part in several other extensive rounds of covert negotiations with the Palestinians.

Mark Regev, a spokesman for Israeli Prime Minister Benjamin Netanyahu, tweeted that the recent terror attacks “are a direct result of the incitement and hatred propagated in Palestinian schools and media.” Regev added, “We are disappointed that so far [Palestinian Authority] President [Mahmoud] Abbas has not condemned these acts of terrorism, as one would expect from a partner in peace talks.”

Sher, who currently serves as a senior researcher at Tel Aviv University’s Institute for National Security Studies, told JNS.org, “[The recent terrorism is] intolerable, and I believe it has to be quite explicitly explained by the Americans and the international community to the heads of the PLO (Palestine Liberation Organization) and the PA that it is their responsibility and duty to subside those acts, and to prohibit these kinds of acts emanating from their territory against Israeli civilian and military targets.”

“Israel has to do whatever it takes in order to counter those terrorist attacks, and at the same time, the government has a duty to pursue, explore whichever avenue possible in order to attain a two-state reality and a two-state solution, even if it is only a framework agreement or a partial agreement,” Sher added.

The rise in terrorism has stirred a heated debate among Israeli defense officials and parliamentarians about the need to continue pursuing U.S.-brokered Israeli-Palestinian conflict negotiations. Israeli Economy Minister Naftali Bennett, head of the Jewish Home Party, said, “Israel is continuing with the diplomatic process as though there’s no terror, while the Palestinians are continuing with the terror as though there’s no diplomatic process.”

“When you educate your children to terrorism from kindergarten, when your television broadcasts paint Jews as monsters, when even Tel Aviv is missing from your map—you’re a terrorist,” Bennett said in a statement.

Ya’alon stated, “As long as the Palestinian Authority continues instigation against the State of Israel and its citizens and does not encourage a culture of peace, we will be forced to deal with terror attacks. This is an intolerable state of affairs as we see it.

Responding particularly to the rocket attacks, Ya’alon added, “We will retaliate forcefully and painfully to this shock to our sovereignty and harm to our civilians and soldiers. If there is no peace in Israel, there will no peace in Gaza.”

Member of Knesset Eitan Cabel (Labor) warned that the violence—including the bus bombing—should not get in the way of current efforts to jumpstart negotiations with the Palestinians. “We’ve been hearing about efforts to renew the diplomatic process,” Cabel stated. “Despite the bombing attempt, we must continue the process with all our energies.”

Sher believes that while Israel is “always looking for as little collateral damage to the political process as possible,” the Jewish state “cannot by any means agree to have it in a way taken hostage or be handicapped in terms of its response and retaliation because there is a political process.”

“These two elements should be completely separated,” Sher told JNS.org.

Israel is planning to free 26 Palestinian terrorist prisoners next week in the third phase of a prisoner release it agreed to as a gesture to the PA for the restarting of the current negotiations. Deputy Defense Minister Danny Danon condemned the planned release amid the terror surge. “In a normal country, when a bus explodes on Sunday and a police officer is stabbed on Monday, you don’t release terrorists as a ‘gesture’ the following week,” Danon said.

Labor MK and former defense minister Binyamin Ben-Eliezer countered that negotiations with the Palestinians are “an Israeli strategic interest,” and said that Israel “must not let up in efforts to push the talks forward.”

Meanwhile, the violence is doing little to increase the already-low confidence of Israelis that the latest U.S.-brokered talks will be more successful than previous rounds of diplomacy. In a new Israel Hayom poll, 85.8 percent of respondents said the current negotiations would not lead to a peace agreement.

“Having said that, we always take into consideration that the extremists will always try to affect the political process by means of violence and terrorism,” he said. “It is intolerable, it is despicable, and there is no way to accept that. And we have to respond to it as though there is no connection between the violence and the negotiation process.”