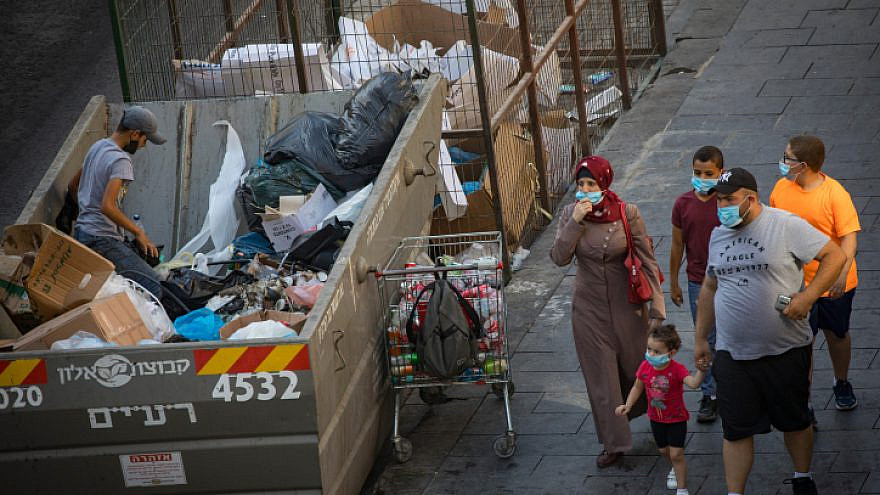 (December 9, 2020 / JNS) The number of Israeli households living in poverty has increased by more than a quarter of a million since the onset of the coronavirus pandemic, according to a new report by one of the country’s leading humanitarian NGOs.

According to the Latet organization’s annual Alternative Poverty Report, which the group submitted on Wednesday to Israeli President Reuven Rivlin, “Today, 656,000 Israeli households (22.6 percent) suffer from food insecurity, compared to 513,000 (17.8 percent) before the pandemic.”

In other words, stated Latet, some 268,000 additional Israeli families now live in poverty.

In addition, the report notes that “the percentage of Israeli households that suffer from financial hardship jumped from 24.1 percent before the pandemic to 38.6 percent (an increase of 14.5 percent).”

The study also shows that 86 percent of elderly aid recipients are experiencing loneliness—21.6 percent of whom fear dying at home with nobody knowing.

“The coronavirus pandemic erupted as a health epidemic and has developed into an unprecedented socioeconomic one,” said Latet executive director Eran Weintrob.

“We are in the worst economic crisis in the country’s history, which will take Israeli society years to recover from. We have to stop the bleeding, as hundreds of thousands of Israelis descend from a temporary crisis, due to loss of employment, into a life of poverty from which it is difficult to impossible to recover,” he added.

“The Alternative Poverty Report for 2020 makes tough, painful reading—one of the hardest we have seen,” said Rivlin. “The report shows how the coronavirus has turned a health crisis into a broad, deep social and economic crisis.”

“The figures show the lack of trust the Israeli public has in the institutions of state and the government, and its ability to deal with and respond to the challenges the crisis poses,” he continued. “At the same time, there a growing reliance on charities, third sector organizations and philanthropy which are called on to fill the role played by government at this difficult time. It is our responsibility; we need to look at the reality and bring change.”

The full report in Hebrew can be downloaded here. The English version of the report will be available at the beginning of 2021.