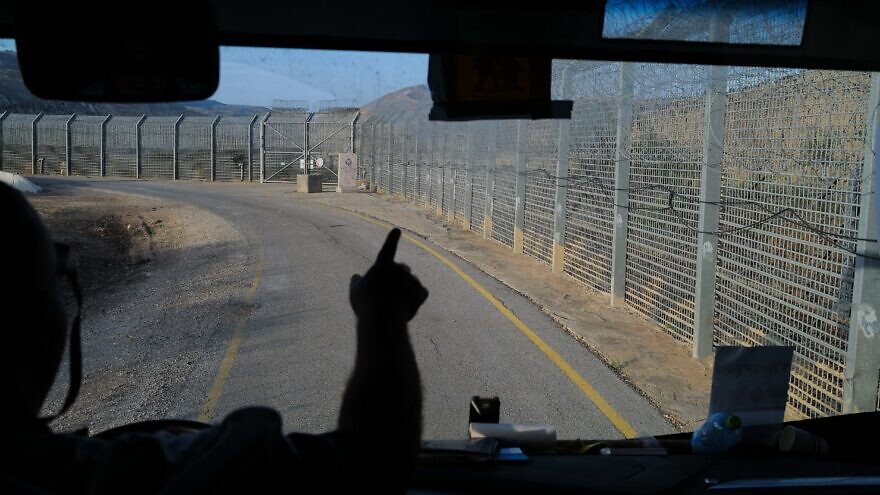 The security fence in the tripoint border between Israel, Syria and Jordan in northern Israel, on May 12, 2022. Photo by Michael Giladi/Flash90.
Spread the word.
Help JNS grow!
Share now:

According to the report, the missiles targeted “some sites in the Damascus southern countryside,” and that Syrian air-defense units “downed most of the hostile missiles.”

“At 23:18 p.m. on Monday 6-6-2022, the Israeli enemy launched an aerial act of aggression from the direction of the occupied Syrian Golan, SANA quoted a Syrian military source as saying, adding that “only material damages were reported.”

The opposition-affiliated, London-based Syrian Observatory for Human Rights said that the Israeli strike targeted the Kisweh region south of Damascus, where Iranian-backed Shi’ite militias are based.

The observatory said that “Syrian air defenses successfully intercepted most of the missiles but missed two, which slammed the base.”

On May 10, Syrian state media reported that five people were killed and seven injured in an Israeli airstrike in Hama province in west-central Syria.

Israel launched “bursts of missiles” over the Mediterranean at 11:20 p.m., triggering air-defense systems, according to a report by SANA at the time.

Four members of the Syrian regime’s air-defense personnel, including a lieutenant, were among those killed, according to the Syrian Observatory for Human Rights.