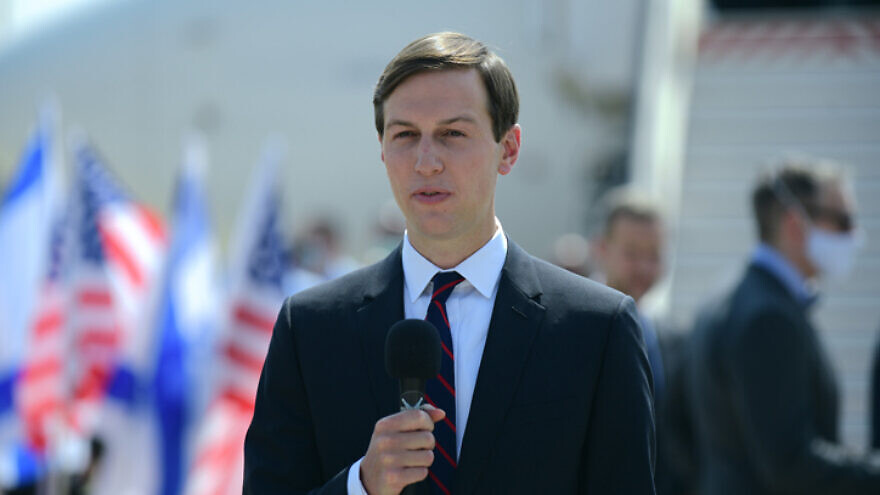 Senior adviser to the president Jared Kushner at Ben-Gurion International Airport near Tel Aviv, ahead of his departure with U.S.-Israeli delegation from Tel Aviv to Abu Dhabi, Aug. 31, 2020. Photo by Tomer Neuberg/Flash90.
Spread the word.
Help JNS grow!
Share now:

According to the report, Friedman said Kushner briefed Sullivan two weeks ago about the Abraham Accords that normalized ties between Israel, and the United Arab Emirates and Bahrain, with Sudan and Morocco signing on later.

Biden has said that he would build upon the progress made under the normalization deals with Israel.

Additionally, according to the Axios report, Friedman told the committee what Israel should expect from the incoming Biden administration such as pressing the Jewish state on West Bank settlements, resuming U.S. assistance to the Palestinian Authority and pressing Israel on its ties with China—an issue that the Trump administration has also done.

Friedman also said President-elect Joe Biden would likely attempt to re-enter the 2015 Iran nuclear deal, according to the report, if Iran returns to compliance, followed by negotiations addressing issues such as Iran’s ballistic-missile testing and regional aggression.

Friedman also expressed concern over the possible influence John Kerry and Susan Rice may have in the Biden administration as it pertains to Iran, even though the former U.S. secretary of state and U.S. national security advisor, respectively, will have portfolios that have little to do with Tehran, according to the Axios report.

Moreover, Friedman said Biden shouldn’t roll back Trump’s policies on Jerusalem and the Golan Heights, according to the report.

Biden has said that he would keep the U.S. embassy in Jerusalem, where it has been since it was relocated from Tel Aviv in May 2018, five months after U.S. President Donald Trump recognized Jerusalem as Israel’s capital. While Biden hasn’t said whether he would reverse the U.S. recognition of Israel’s sovereignty over the Golan Heights, a senior Biden campaign official told JNS before the election that he would likely not undo the embassy move.

Friedman did criticize Trump’s relationship with Turkish President Recep Tayyip Erdoğan, which the ambassador characterized as “too warm,” saying Biden would be tough on Turkey, according to the report.