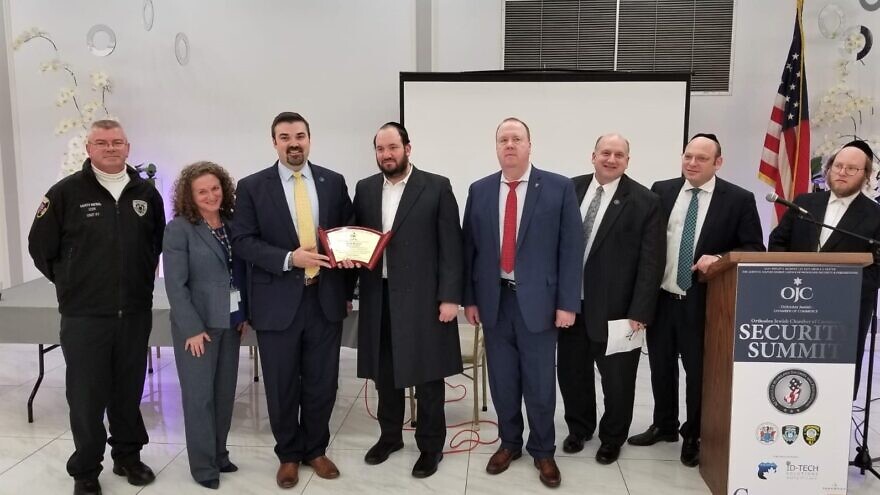 Jared Maples (third from left), the director of the N.J. Office of Homeland Security and Preparedness, accepts an award from a Jewish community leader from Jersey City. Maples spoke at a program on public safety by security officials and law-enforcement experts, Feb. 18, 2020. Credit: Orthodox Jewish Chamber of Commerce.
Spread the word.
Help JNS grow!
Share now:

(February 20, 2020 / JNS) Some 200 people gathered at Congregation Sons of Israel in Lakewood, N.J., on Tuesday night not to pray, but to learn about new security technologies and hear from law-enforcement experts and others about how to stay safe.

The security summit took place as anti-Semitic incidents and vandalism continue to be reported in Ocean County, N.J., particularly in the towns of Lakewood and Jackson.

According to the ADL, Ocean County recorded 21 anti-Semitic incidents in 2018—a number that experts believe is low because of the underreporting of incidents.

The director of the N.J. Office of Homeland Security and Preparedness, Jared Maples, was given an award from a Jewish community leader from Jersey City. Maples also spoke during the program.

One of the goals of the evening was to empower businesses and local institutions with the knowledge and tools to be proactive in protecting themselves and others, Duvi Honig, executive director of the Orthodox Jewish Chamber of Commerce, told JNS. He added that the evening was also designed to show people that “they have a voice in Trenton”—the capital of New Jersey—and that state politicians are eager to hear about their concerns.

Organized by the Orthodox Jewish Chamber of Commerce, the program was held about two months after a machete attack at a rabbi’s home in the heavily Orthodox Jewish enclave of Monsey, N.Y., injuring five people, and a deadly attack on a Jersey City kosher supermarket that left four people dead, including a police detective.

Among the vendors and sponsors showcasing their security tools and systems were ID Tech Solutions, Perceptage, IronRock Security, Defendry, and EZ Security and Sound.