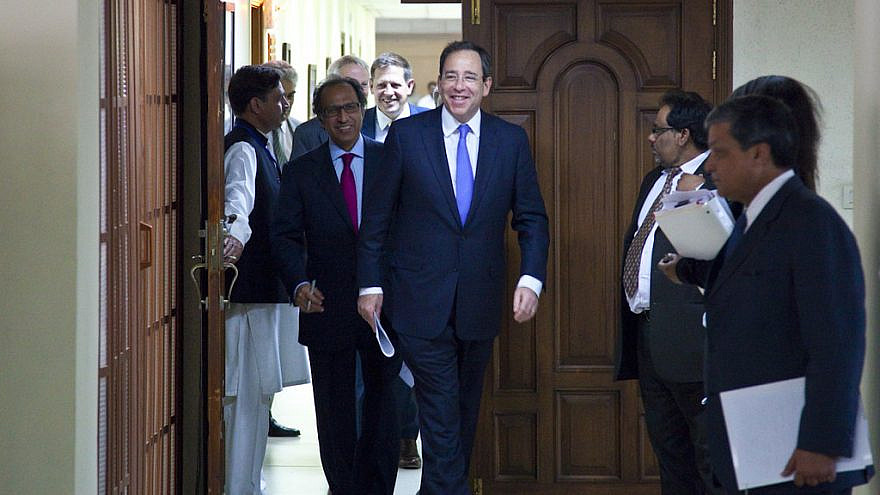 Nides, who is the managing director and vice chairman of Morgan Stanley, was confirmed by a voice vote in the Senate, which is evenly split between Democrats and Republicans.

The confirmation ends a nearly 10-month period in which Washington had no ambassador in the Jewish state. Former President Donald Trump’s envoy, David Friedman, stepped down in January, and the Biden administration took its time with the post, eventually naming veteran diplomat Michael Ratney to serve as interim chargé d’affaires until the confirmation process was finalized.

Israeli Ambassador to the United Nations Gilad Erdan congratulated Nides, saying he was sure the new envoy “will further strengthen the special bond between Israel and the U.S.”

Nides was confirmed in a voice vote on the Senate floor after Sen. Josh Hawley (R-Mo.) filed reservations to the nomination, blocking Senate Foreign Relations Committee chairman Robert Menendez from fast-tracking the process via a unanimous vote.

The Missouri senator said that he objected on behalf of his Republican colleagues to Nides, along with seven other nominees, presented for confirmation by Menendez. The latter blasted the move, saying, “So we will have no ambassador in Israel as we deal with the challenges of Iran and others in the region. It is mind-boggling all of those who get up here and talk about our ally, the State of Israel, but we won’t have an ambassador there to help us meet the challenges that Israel faces.”

The Israel Policy Forum also called out the Republicans over the ploy, said in a statement: “A strong U.S.-Israel relationship requires strong diplomatic representation, allowing both sides to work in close partnership and resolve disagreements amicably. We are dismayed that Tom Nides, who is unquestionably qualified to serve as ambassador to Israel, continues to be blocked from a swift confirmation on the Senate floor. We call on the Senate to act so that Mr. Nides can begin the critical task of representing the U.S. and its interests in Jerusalem.”

The Republican opposition to Nides was unusual, as the confirmation of U.S. envoys to Israel is rarely contested. Unlike Friedman, whom the Democrats considered a controversial figure, the confirmation of Nides, who fostered effective working relationships with Israeli officials during his years with the Obama administration, was not expected to meet any snags.

“All of us at U.S. Embassy Jerusalem eagerly await the arrival of Thomas R. Nides to be Ambassador of the United States to the State of Israel,” the mission tweeted after the nomination was confirmed.