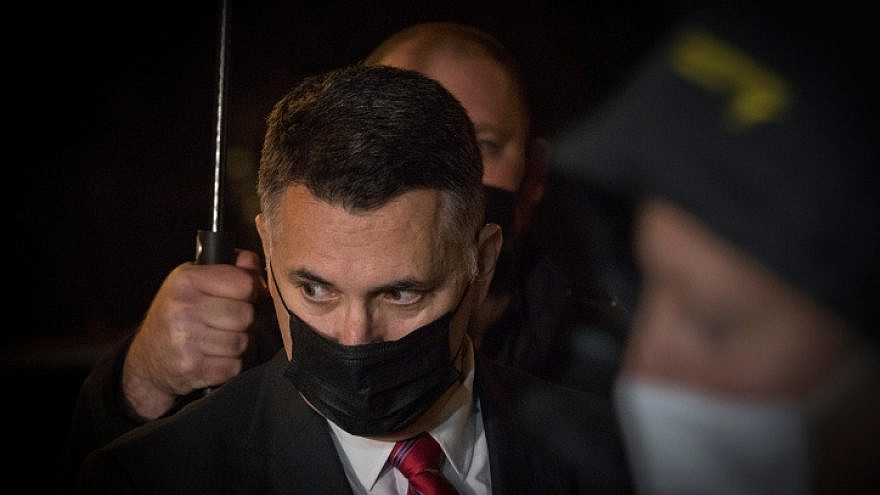 Gideon Sa'ar gives a press conference as he meets with Israeli hospital directors at a protest tent outside the Finance Ministry in Jerusalem on Jan. 19, 2021. Photo by Olivier Fitoussi/Flash90.
Republish this article
838 WORDS
Spread the word.
Help JNS grow!
Share now:

(February 1, 2021 / JNS) Within three weeks of announcing that he was leaving Likud to form the New Hope Party ahead of Israel’s March 23 elections,  Gideon Sa’ar retained four of the founders of the American-based Lincoln Project—comprised of Republicans and former Republicans who sought to defeat U.S. President Donald Trump—to serve as advisers to his campaign.

On the surface, the Lincoln Project might seem a natural fit for the former minister and Cabinet secretary, who unsuccessfully challenged Netanyahu for the Likud leadership in 2019. Sa’ar hails from Netanyahu’s party but wishes to oust the popular but controversial incumbent. It is unclear, however, whether this group is capable of extrapolating their experience in the United States and implementing their methods in Israel.

One indication that Steve Schmidt, Rick Wilson, Stuart Stevens and Reed Galen don’t understand the ins and outs of Israeli politics in general and Sa’ar’s views in particular is the content of their past statements, which run counter to his positions on key issues. What they appear not to grasp is that he is a member of Israel’s right—even billing himself as being to the right of Netanyahu—and his supporters championed Trump’s policies vis-à-vis Israel, the Mideast peace process and Iran.

In an interview with MSNBC in May 2018, for example—in the immediate aftermath of the Trump administration’s move of the U.S. embassy in Israel from Tel Aviv to Jerusalem—Schmidt said, “ … [Trump] knows nothing about anything. He’s bumbling around and he destabilized with his rash move the Middle East, and as I said when he announced the move to the embassy … there will be blood on his hands. Not because he pulled the trigger, but because he destabilized the region without having any clue about what he was doing.”

Schmidt also lambasted the inclusion in the embassy ceremony of evangelical leaders Pastor John Hagee, founder of Christians United for Israel (CUFI), and Pastor Robert Jeffress, both of whom have historically backed Israel’s right-wing bloc.

“When we saw the two theocratic nutjob preachers at the crossroads of civilization and religion be able to antagonize Judaism, Catholicism, Islam and Mormonism all on the same day because of their previous bigoted pronouncements, their extreme ideology. This is not about making the Middle East more secure, it’s not about making the United States more secure,” he said.

Later, Wilson and Stevens voiced their objections to the Jan. 3, 2020 assassination of Iran’s Islamic Revolutionary Guard Corps Quds Force Gen. Qassem Soleimani, who was killed in a U.S. drone strike in Iraq.

On Jan. 3, Wilson tweeted: “So my medium take is the doctrine of unintended consequences is a cruel mistress, Iran gets a vote in what happens next, and impulse is not a strategy.”

For his part, Stevens tweeted: “Two days into a new decade and the United States is at war with Iran.”

This is the same Stevens who, in Sept. 2016, ridiculed then-presidential candidate Trump for warning that the Joint Comprehensive Plan of Action (JCPOA)—the Iran nuclear deal signed in 2015—“is going to destroy Israel unless I get elected.”

Stevens has also been vocal in his criticism of Israeli policy. For instance, he attacked the Israeli government’s decision in August 2019 to deny entry into the country of U.S. Reps. Rashida Tlaib (D-Mich.) and Ilhan Omar (D-Minn.). The two congresswomen were slated to participate in a tour sponsored by the Palestinian NGO Miftah, which has a public record of openly expressing anti-Semitism, supporting the BDS movement and fostering sympathy for and links to terrorist groups.

The denial of their visit was in keeping with Knesset legislation, passed in March 2017, which grants the Israeli interior minister the authority to deny entry visas to non-Israeli citizens who actively support boycotts of the Jewish state.

“Strikes me as insult to [Tlaib’s and Omar’s] constituents,” tweeted Stevens. “They elected these Reps. They pay the same taxes that go to support Israel as constituents from most pro-Israel Reps. We have elections every 2 years. If voters disagree, they can vote them out. But until then they are US elected officials.”

On Jan. 28, 2020, the day Trump unveiled his “Peace to Prosperity” plan—also dubbed the “deal of the century”—Stevens tweeted: “Just in case you need a good laugh to get through the afternoon, Jared Kushner is in charge of Israel-Palestinian policy for the United States of America.”

Yet Kushner has played a pivotal role in the brokering of Mideast peace deals between Israeli and its neighbors. Less than a year after Trump revealed the contents of the plan at the White House with Netanyahu at his side, Kushner was instrumental in the forging of the Abraham Accords normalization agreements between Israel, the United Arab Emirates and Bahrain. Similar deals with Sudan and Morocco were soon to follow.

It should be noted that all of the above policies adopted and implemented by the Trump administration enjoyed widespread support in Israel. Whether the Lincoln Project founders have grasped this electoral reality sufficiently remains to be seen.