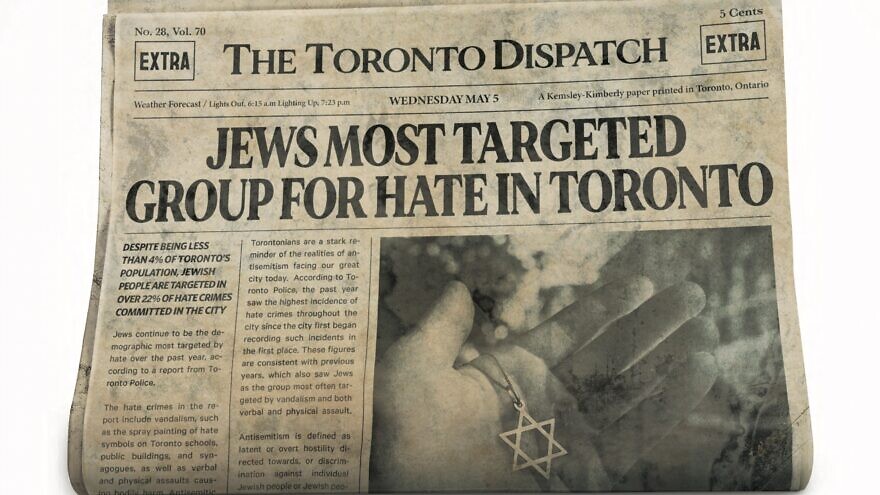 (September 9, 2022 / JNS) The Canadian city of Toronto has launched a new initiative aimed at educating citizens about modern-day anti-Semitism in the city.

The “Toronto for All” campaign will include posters on transit centers, on social-media outlets run by the city and a webpage with information about anti-Semitism, the Jewish community and more. It is being conducted with input from a “Community Advisory Committee” made up of members of the Jewish community, among them Jaime Kirzner-Roberts, the director of policy at the Friends of Simon Wiesenthal Center.

“It comes at a critical time as the Jewish community remains the most targeted group for hate crimes in the city,” she said. “Anti-Semitism didn’t start nor end with the Holocaust, and while it is the oldest hatred, it’s sadly as prevalent today as ever.”

The 2021 audit of anti-Semitic incidents in the city by the Toronto Police Service showed that the Jewish community was the most-targeted group for hate crimes. Of the 257 hate crimes committed in 2021, 56 of them targeted the Jewish community with another 14 being “multi-bias” crimes in which the victim identified as both Jewish and another minority.

The Centre for Israel and Jewish Affairs was also involved in the campaign’s creation and tweeted this week: “We hope this campaign will illuminate the challenges faced by the Jewish community and that it will inspire all Torontonians to unite against anti-Semitism. … Like most hate, so much of anti-Semitism is rooted in ignorance, and the best way to combat it is through education.”

This is the 12th such campaign the city has run; it will continue through October. Previous efforts have focused on ageism, anti-black racism and Islamophobia.

“Our ‘Toronto for All’ campaigns have helped us create dialogue about confronting these types of hatred and how we can work together to fight these narratives,” said the city’s mayor, John Tory. “This campaign has been developed with the community to address an extremely troubling rise in anti-Semitism and acts of hatred against the Jewish community. I am proud to support this campaign, and my hope is that it will help us reduce anti-Semitism in Toronto so we can continue to create a safe city for everyone.”