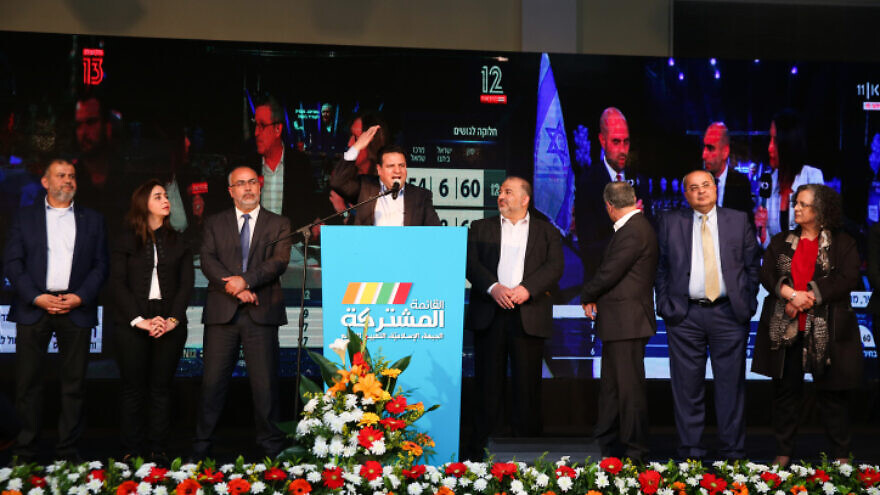 Members of the Joint Arab List at the party’s headquarters in the Arab city of Shfar’am during Israel's election on March 2, 2020. Photo by David Cohen/Flash90.
Republish this article
589 WORDS
Spread the word.
Help JNS grow!
Share now:

(March 4, 2020 / JNS) With 99 percent of the votes from Israel’s general election counted on Wednesday, the Joint Arab List alliance is projected to have won a record 15 of the Knesset’s 120 seats, its best-ever electoral result.

Voter turnout in the Israeli-Arab sector, which represents 20 percent of the country’s population, hit a 20-year high of 64.7 percent on Monday, according to Arik Rudnitzky of the Israel Democracy Institute and Tel Aviv University’s Moshe Dayan Center, according to Reuters.

Shaheen Sarsur, who has been involved in Arab politics for more than 12 years and served as a parliamentary consultant for three previous Knesset members—the most recent being Talab Abu Arar of the United Arab List (Ra’am)—told JNS that part of the reason for the high turnout was the Arab parties’ push to get out the vote on election day. For example, he said, in the town of Kafr Qasim, east of Tel Aviv, “There was a car that drove around town from morning until night with a loudspeaker calling on residents to get out and vote and saying things such as ‘we lack just 15,000 votes.'”

According to Sarsur, the Joint List ran a very aggressive campaign, with slogans such as: “This is an election for your destiny” or “We can prevent the formation of a right-wing government.” Sarsur added that “the incitement by Prime Minister Benjamin Netanyahu against the Arab public” had also played a large role in the Joint List’s electoral success.

One of the Likud’s main campaign themes was that Blue and White leader Benny Gantz could only form a government with the help of the Joint List. The campaign slogan was “Bibi or Tibi,” referring to long-time Arab MK Ahmad Tibi. Gantz, for his part, flatly rejected the possibility of sitting in a government with the Arab parties. Joint List leader Ayman Odeh released a statement in Arabic after the election in which he said Gantz had failed to offer an alternative to the right.

Odeh told cheering supporters in the Arab city of Shfar’am on election night that “the Netanyahu regime does not have 61 [seats, i.e. a majority] for one reason: the ascendance of the Joint List,” according to Reuters.

However, Rodayna Badir, an expert on Arab society in Israel working on research at the Hebrew University of Jerusalem, told JNS the main reason Israel’s Arabs went out to vote was the Trump administration’s “Peace to Prosperity” plan.

“The people are afraid, not only about a transfer of land, but of what they see as the real goal: a transfer of population,” said Badir, who lives in Kafr Qasim.

“If you ask Israeli Arabs, they will say that part of their identity is Israeli. The younger generation feels more Israeli than Palestinian, but now they feel the state is accusing them of being traitors,” she said.

Israel’s traditional left-wing parties, Meretz and Labor, had lost Arab votes to the Joint List during this election cycle, said Badir, in part because “you did not hear much from left-wing Israeli politicians speaking out against the land swap idea in the Trump peace plan.” That, combined with the fact that there were no Arab Knesset members high up on any of the left-wing parties’ lists, she said, drove many voters to the Joint List.

The real question now, said Sarsur, is what the Joint List will do next.

“The question is what the Joint List will do with this newfound power and if it will use it to serve the Israeli Arab population,” he said.