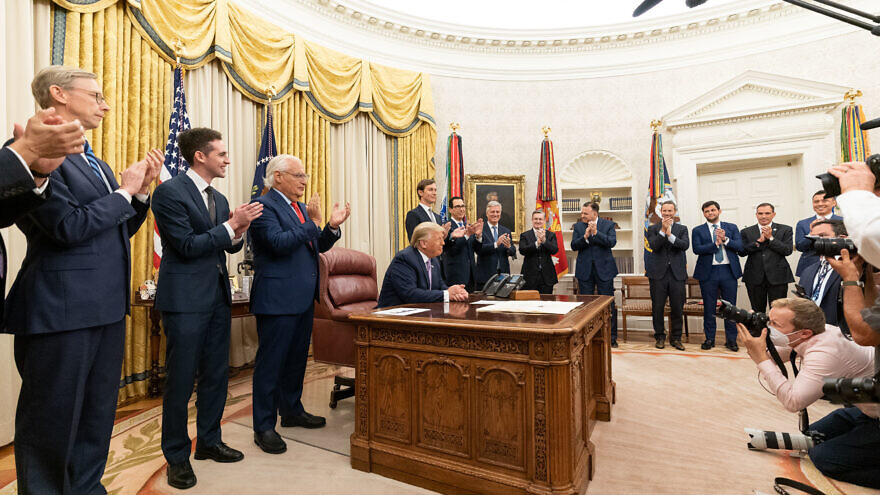 (August 20, 2020 / JNS) U.S. President Donald Trump said on Wednesday that the sale of advanced Lockheed Martin F-35 fighter jets to the United Arab Emirates is under consideration, despite an Israeli denial that Jerusalem has given its consent.

“They would like to buy quite a few F-35s,” the president told reporters. “It’s under review,” he said. “They’ve definitely got the money to pay for it.”

Israeli Prime Minister Benjamin Netanyahu denied on Tuesday that the peace deal announced last week normalizing ties between Israel and the UAE included a clause that allowed for the sale.

“The historic peace agreement between Israel and the United Arab Emirates did not include Israel’s consent to any arms deal whatsoever between the United States and the UAE,” he said in a statement released by the Prime Minister’s Office.

“The F-35 jet is the strongest in the world,” said Defense Minister Benny Gantz on Tuesday. “It’s not good to have it circulate in other places.”

Netanyahu’s and Gantz’s statements came on the heels of a Ynet report of a “secret clause” in the Israel-UAE agreement that allows the United States to sell the UAE F-35s and advanced drones.

The accord was first announced by Trump on Aug. 13. According to media reports, talks are underway between the parties to hammer out the details. A signing ceremony reportedly is expected to take place in September or October.

America has traditionally refrained from selling advanced weapons to Arab countries, including those with which Israel has peaceful relations, unless Jerusalem gives its consent. It is a premise of the U.S.-Israel strategic relationship that the Jewish State must maintain its military superiority in the region.