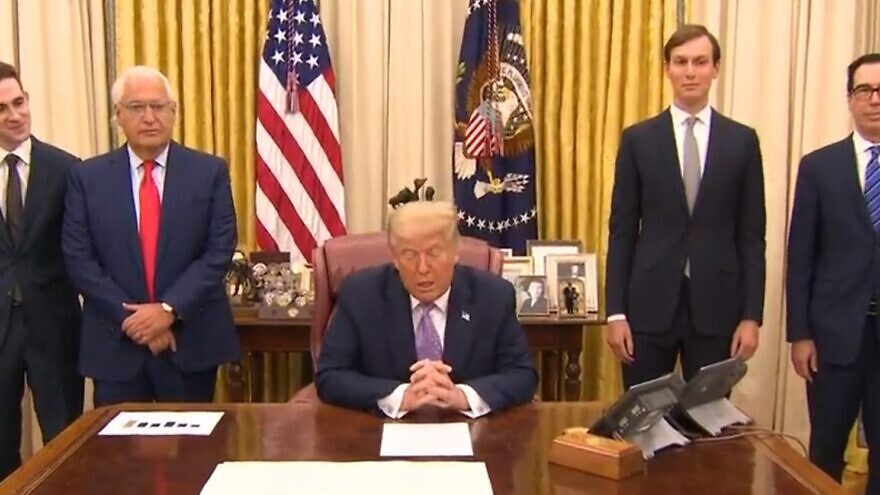 (August 13, 2020 / JNS) Israel and the United Arab Emirates reached a peace agreement on Thursday to begin the process of normalizing relations between the two Middle Eastern countries, in part brokered by U.S. President Donald Trump and his administration.

The deal was finalized in a phone call on Thursday between Trump, Israeli Prime Minister Benjamin Netanyahu and Sheikh Mohammed bin Zayed Al Nahyan, the crown prince of Abu Dhabi.

In a joint statement by the United States, Israel and UAE posted by Trump on Twitter, it said that this was a “historic diplomatic breakthrough” and will “advance peace in the Middle East.”

Additionally, Israel and the UAE will “immediately expand and accelerate cooperation regarding the treatment of and the development of” a vaccine for COVID-19.

Under the deal, however, Israel has agreed to suspend applying sovereignty to parts of the West Bank, also known as Judea and Samaria.

“The United States, Israel and the United Arab Emirates are confident that additional diplomatic breakthroughs with other nations are possible,” added the statement. In recent years, Israel has had visits and warming ties with other Gulf Arab states, including Bahrain and Oman. Clandestine relations between Israel and Saudi Arabia have also reportedly grown as well.

In retweeting Trump, Netanyahu called it a “historic day.”

“Together we can bring a wonderful future. It is an incomparably exciting moment,” Netanyahu said in a statement. “I have the great privilege to make the third peace treaty between Israel and an Arab country, the UAE.”

Bin Zayad confirmed on Twitter that an agreement was reached to “stop further Israeli annexation of Palestinian territories,” and that Israel and the UAE “also agreed to cooperation and setting a roadmap towards establishing a bilateral relationship.”

During a call with President Trump and Prime Minister Netanyahu, an agreement was reached to stop further Israeli annexation of Palestinian territories. The UAE and Israel also agreed to cooperation and setting a roadmap towards establishing a bilateral relationship.

In an Oval Office announcement, Trump said that the deal would be known as the “Abraham Accord” after the “father of all three great faiths.”

U.S. Ambassador to Israel David Friedman, who was also in attendance at the Oval Office, said that “no person better symbolizes the potential for unity of these three great faiths.”

Trump also thanked his senior advisor and son-in-law Jared Kushner, who had been leading the administration’s efforts to broker a peace deal between Israel and the Palestinians, and for his efforts in securing the new deal.

“The president, like with all things, urged us to take an untraditional approach,” Kushner said in the Oval Office. “You can’t solve problems that have gone unsolved the way people have done before you and failed.”

“The United States congratulates Israel and the Emirates for this remarkable achievement, which is a significant step forward for peace in the Middle East. Blessed are the peacemakers. Mabruk and Mazal Tov,” Pompeo said in a tweet.

Israeli Ambassador to the United States Ron Dermer commended the UAE for joining Egypt and Jordan in forging peace between Israelis and Arabs.

A great day for peace! Israel commends the courage of MBZ for the historic decision of the UAE to join Egypt (1979) and Jordan (1994) in making peace with Israel. Israel deeply appreciates all @POTUS Trump has done to make this breakthrough possible. More to come!