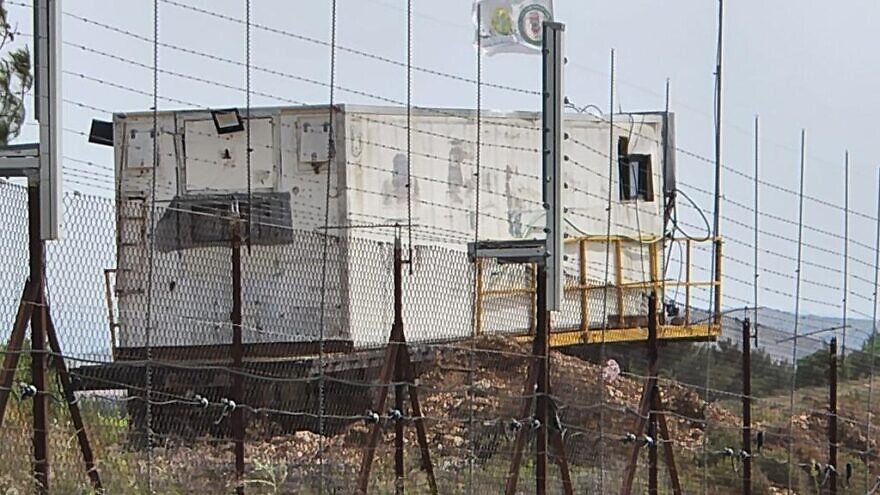 A structure situated on the Israel-Lebanon border that the Israeli military claims is being used by Hezbollah to gather intelligence. Credit: IDF Spokesperson's Unit.
Spread the word.
Help JNS grow!
Share now:

(July 6, 2022 / Israel Hayom) Israeli Ambassador to the United Nations Gilad Erdan demanded on Tuesday that the U.N. take action against Hezbollah over military posts the terror group recently erected along the Israel-Lebanon border.

The Iranian-backed Shi’ite terrorist group has set up 18 observation posts along Israel’s northern frontier, which are manned around the clock by Hezbollah operatives. Each post consists of an observation tower and adjacent residential structures and stands about between five and 250 yards from the border, according to Erdan. The flag of a Lebanese civil organization, “Green Without Borders,” flies over the posts, but the IDF has exposed this as a fictitious organization founded by Hezbollah back in 2018.

In a letter to the U.N. Security Council and U.N. Secretary-General António Guterres, Erdan warned that the “new reality on the Israel-Lebanon border points to a clear escalation that could ignite the entire region” and argued that the true objective of the posts is intelligence gathering.

“Under the guise of the so-called ‘Green without Borders’ environmental organization, Hezbollah is expanding its terror footprints on a daily basis, just mere meters from Israel’s northern border, and from within UNIFIL’s area of operations,” he said.

“The use of this organization as a front for Hezbollah’s malign activities has been recognized by the U.N. and described in several periodic reports of the secretary-general. As has been flagged by several U.N. reports and noted in relevant U.N. resolutions, this perverse tactic, of terror organizations hiding behind non-profits and NGOs, is a growing phenomenon that is not only employed by Hezbollah, but by many other terror groups across the globe as well,” the letter states.

“These are military outposts for all intents and purposes, established and maintained by Hezbollah terrorists and not innocent Lebanese environmentalists. This is part of the broader picture of Hezbollah’s growing presence in Southern Lebanon and yet another example of its ongoing hostile activity in the area,” the letter continues.

“Israel continues to stress that the responsibility for Hezbollah’s expansion lies squarely on the shoulders of the Lebanese authorities, and expects the Lebanese government to take immediate action to curb Hezbollah’s advancements and military buildup,” wrote Erdan.

“Israel values its strong and positive working relationship with UNIFIL. It is in Israel’s best interest to have a fully functional and capable peacekeeping force contributing to the prevention of terrorist activities along our northern border. Nonetheless, the current reality does not allow UNIFIL to carry out its core tasks in accordance with its mandate. If the Security Council—and the U.N. as a whole—seeks to prevent the escalation of conflict, concrete action must be taken to ensure that Hezbollah no longer acts with impunity,” the letter states.

“Moreover, these ‘shipping containers’ should be removed. The State of Israel demands that the U.N. and its relevant bodies act now in order to facilitate the dismantling of all Hezbollah outposts in Southern Lebanon, and especially those military infrastructures recently erected along the Blue Line,” the envoy stressed.