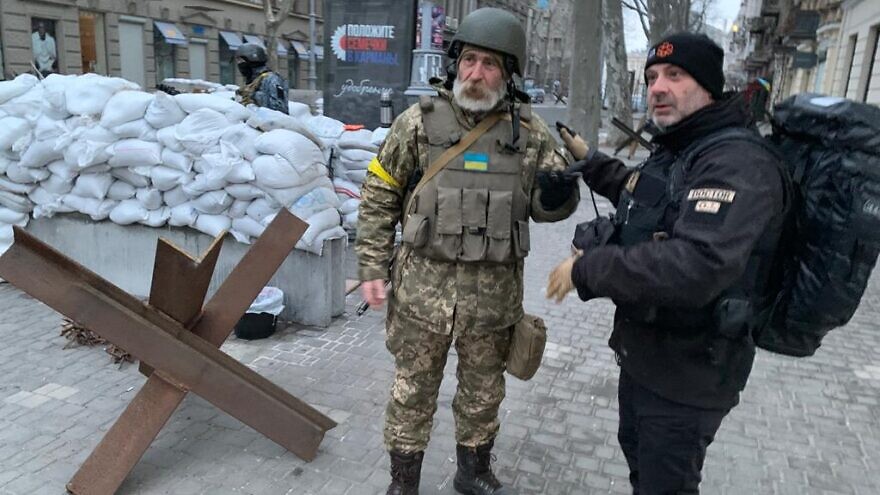 (March 15, 2022 / JNS) United Hatzalah’s medical relief mission to Ukraine last week rescued five injured members of one family, including an infant, from the war-torn nation, according to a spokesperson for the organization.

After having received reports on the afternoon of March 6 about several injured and sick refugees needing evacuation from Odessa, Dr. Zev Neuwirth led a small team of medical personnel through the Palanca border crossing from Moldova.

The team also brought with it medical equipment and supplies to provide treatment and support to a convoy of 150 Ukrainian refugees headed out of the country, according to a spokesperson for United Hatzalah.

After making it through multiple roadblocks, they were forced to stop and take shelter in an apartment in Odessa due to a curfew, said Neuwirth.

“We had to sleep on the floor and avoid windows so as not to run the risk of getting shot,” he said. The team was viewed with “extreme” suspicion, he added. “It’s wartime in the full sense … and everyone who enters here, especially those who speak a different language, is a potential infiltrator or spy.”

In cooperation with the local hospital, ambulances were procured on Thursday morning to transport the patients out of the city to the vehicles waiting to take them across the border.

When the team got the call, “We knew we had to drop everything and go,” said Neuwirth.

Shortly after exiting Odessa, he said, “We heard air raid sirens and explosions. The entire drive was tense for everyone involved until we reached the safety of the border.”

The team crossed into Moldova just after 4 p.m., following which United Hatzalah volunteers were granted permission to receive the family and then continued the ongoing emergency medical and care, according to the UH spokesperson.

Dr. Zev Neuwirth holds the youngest member of a family of five he and other members of a United Hatzalah medical team rescued from Odessa, March 7, 2022. Credit: United Hatzalah.

“United Hatzalah’s mission is to provide medical relief and care for Ukrainian refugees,” said Neuwirth. “When we have the ability and the opportunity to help those inside Ukraine,  we have a specialized team that can and will do this as well,” he added.

Neuwirth, who is based in Miami, served for six years as a naval medical officer, and was most recently assigned to the 4th Civil Affairs Group of the United States Marine Corps, according to United Hatzalah.

“I am no stranger to these types of medical rescue operations and hence I was asked to lead this team. I am confident that God will watch over us and help us help these suffering souls so that we can get them to safety and ease their pain and suffering. This whole ordeal is far from over and as long as people are in need of help we will be here to help them,” he said.