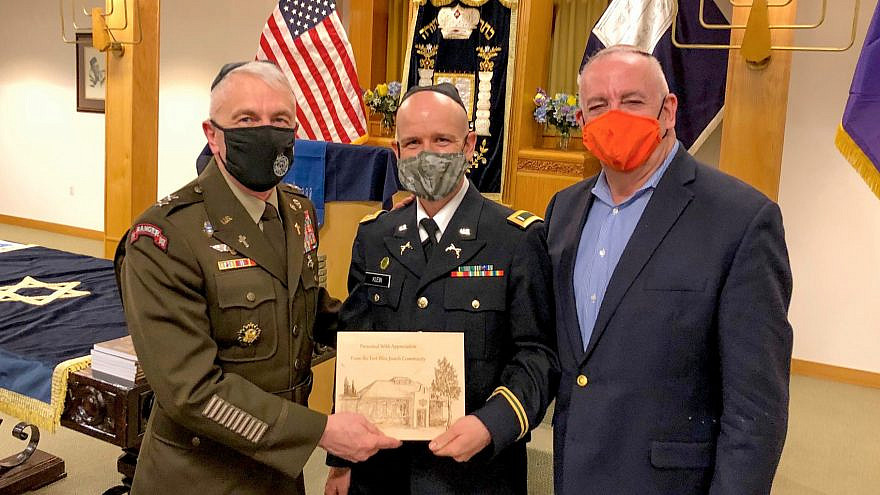 (May 6, 2021 / JNS) The U.S. Army’s top chaplain applauded the three-dozen rabbis serving as chaplains for Jewish troops while attending the dedication ceremony of a new Torah scroll at Fort Bliss, an Army base near El Paso, Texas.

Maj. Gen. Thomas Solhjem, the U.S. Army’s chief of chaplains, joined the Bliss Religious Support Office (RSO), and the Jewish community at Fort Bliss and El Paso, at the April 26 gathering before the Torah scroll was installed in the newly renovated synagogue at Fort Bliss, called Chapel 3.

Speaking to a crowd of distinguished guests, Solhjem said the “Jewish people have committed to the founding of our country, yet they were not always received and welcomed. Today’s army is something much different. Across the army at all three ‘compos’—active, guard and reserve—we have three-dozen Jewish rabbis who serve our military family, the Jewish community and the soldiers, the men and women, who wear the uniform of this country.”

He said “a critical element in the founding of our nation is the diversity that we see in our faith communities. The inclusivity of our faith and beliefs are represented in the military by the chaplains who serve this great army and by the communities that gather within our army family.”

The synagogue is open on Friday evenings for Shabbat at 7 p.m., Saturday for Torah study at 10 a.m. and on most Jewish holidays.