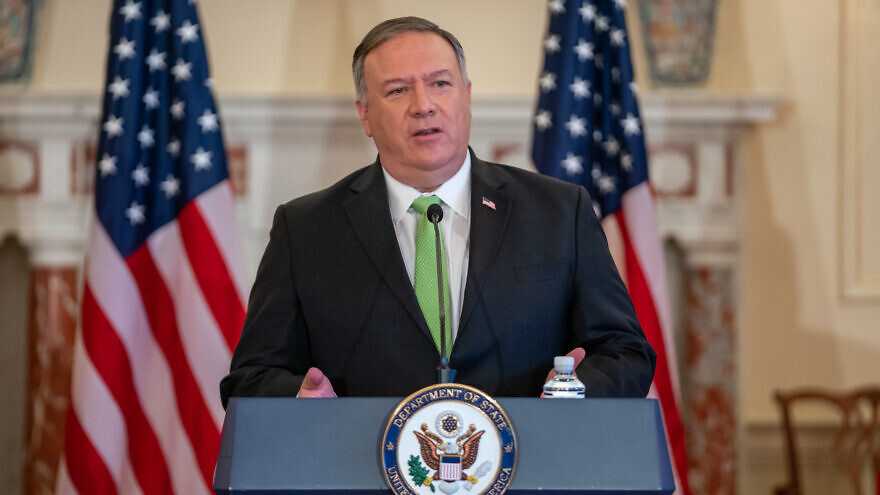 (September 24, 2020 / JNS) “We don’t intend to build a bomb.” So said Iran’s Foreign Minister Mohammad Javad Zarif in a video call this week arranged by the Council on Foreign Relations. Zarif added that Iran has “exercised a lot of restraint and patience,” and that it “has not been disruptive in this region.”

He also said in the call that Iran is now willing to discuss a prisoner exchange. Does the change in sentiment mean that the Trump administration’s pressure on Iran is working?

According to former Israeli national security advisor Yaakov Amidror, in addition to multiple sanctions, Iran is under tremendous pressure due to its falling currency, economic devastation in Syria and Lebanon, and now, Israel’s normalization deals with the United Arab Emirates and Bahrain just across the Gulf.

“All this adds to the pressure on Iran,” he said in a phone call arranged on Wednesday by the Jewish Institute for National Security of America.

Iran and the United States engaged in a week of trading barbs as the Trump administration reimposed sanctions on Iran pursuant to the snapback process under U.N. Security Council resolution (UNSCR) 2231 over the Islamic Republic’s failure to adhere to the agreement.

U.S. Secretary of State Mike Pompeo said “the greatest threat to peace in the Middle East comes from the Islamic Republic of Iran, whose violent efforts to spread revolution have killed thousands and upended the lives of millions of innocent people. History shows appeasement only emboldens such regimes,” adding that Iran is “the world’s leading state sponsor of terror and anti-Semitism.”

According to the State Department on Aug. 20, the United States notified the U.N. Security Council of Iran’s significant non-performance of its commitments in relation to the 2015 nuclear deal—the Joint Comprehensive Plan of Action (JCPOA). This notification triggered the 30-day process leading to the snapback of previously terminated U.N. sanctions, which became effective on Sept. 19.

On Tuesday, Iranian President Hassan Rouhani threatened that the next U.S. president must accept Tehran’s demands.

“Any U.S. administration after the upcoming elections will have no choice but to surrender to the resilience of the Iranian nation,” he stated in his virtual address to the U.N. General Assembly.

The JCPOA, signed by Iran and the P5+1 (China, France, Germany, Russia, the United Kingdom and the United States) aimed to restrict Iran’s nuclear-weapons program in return for an easing of crippling sanctions at the time.

‘Iran was hiding information from the IAEA’

The problem with Zarif’s comment about the bomb is that if it weren’t for the Mossad’s 2018 operation—when it broke into Iran’s secret nuclear archive in Tehran and smuggled over 100,000 documents and computer files to Israel, proving Iran’s intentions to build a bomb—it would be easy to believe him.

Indeed, Elliott Abrams, the U.S. special envoy for Iran and a vociferous opponent of the 2015 Iran nuclear deal, said in a phone call with reporters this week, “we have seen in the archive that the Israelis recovered that while it was negotiating and while it was theoretically abiding by the JCPOA, Iran was hiding information from the IAEA. And Iran was keeping this archive of material about building a nuclear weapon, and it was maintaining the teams that have engaged in that project intact, preparing for the day that—in which they could start again.”

In addition to the Trump administration, numerous foreign-policy experts and Middle East leaders agree that Tehran has not adhered to the letter or spirit of the deal, nor has it acted in good faith.

For example, Saudi Arabia’s King Salman bin Abdulaziz took aim at Iran during his debut speech on Wednesday at the annual U.N. General Assembly (held online this year), calling for a united front to contain Iran and stop it from getting weapons of mass destruction.

He said Iran exploited the deal with world powers “to intensify its expansionist activities, create its terrorist networks and use terrorism,” adding that this had destabilized several countries in the region and produced nothing but “chaos, extremism and sectarianism.”

Abrams said Iran “poses a unique threat to the world,” and that the regime “uses its nuclear program to extort the international community, and threaten regional and international security.”

In addition to China and Russia, Britain, France and Germany have signaled that they have no intention of enforcing the sanctions.

Barbara Slavin, director of the Future of Iran Initiative at the Washington, D.C.-based Atlantic Council, told JNS “Europe has made it very clear that it will do whatever it can to preserve the JCPOA in hopes that Americans will elect Joe Biden, who has promised to return to the deal if Iran also fully complies, or that a second term Trump administration would be more open to compromise.”

She said “the Europeans take tremendous pride in the agreement, which was facilitated by the E3 and the E.U., and want to avoid further proliferation and conflict in the Middle East.”

She also thinks that Iran will not develop nuclear weapons “unless its threat perception increases exponentially.”

Tehran “has had the ability to dash for a bomb for more than a decade but hasn’t done so because it believes it would only incentivize the Saudis to build nuclear weapons,” said Slavin. It is “a matter of political will” for Iran, and for this reason, “diplomacy is the only solution.”

But not everyone agrees with Slavin, China, Russia or the Europeans for that matter.

Ilan Berman, vice president of the American Foreign Policy Council, told JNS the Trump administration’s snapback of sanctions “should be understood for what it is—a reaction to the U.N.’s unwillingness to extend limits on Iran’s purchases of advanced conventional arms, or to hold the regime accountable for its violations of the JCPOA.”

Efraim Inbar, president of the Jerusalem Institute for Strategy and Security, said Iran’s leaders “are determined to get the bomb because this is the insurance policy for regime survival.”

He told JNS that he believes Europeans who have taken Iran’s side “are appeasers and anti-American,” and are “belittling the Iranian threat” along with many so-called “experts.”

“They simply live in a ‘La La Land’ where there are no evil guys with aggressive intentions,” he lamented.

In another call with the press held on Sept. 16, Abrams mocked “the almost religious commitment of some countries” to the JCPOA.

“Five years of JCPOA meetings have not moderated Iran’s tactics or choices at all,” he said. “It’s time for peace-loving nations to recognize this reality and join us in imposing sanctions on Iran. It is astonishing that anyone would think or have thought it sensible to allow the arms embargo on Iran to expire next month, given that regime’s role in destabilizing Iraq, Syria, Yemen and Lebanon, and its continuing support for terrorism.”

Abrams said America is trying “to overcome the diplomatic malpractice five years ago that suggested it would be a good idea” to allow Iran to import and export any arms it wanted.

The United States expects “all U.N. member states to implement their member state responsibilities and respect their obligations to uphold these sanctions,” he said.

Pompeo noted that in addition to Iran’s failure to perform its JCPOA commitments, “the Security Council failed to extend the U.N. arms embargo on Iran, which had been in place for 13 years.”

Iran is also banned from engaging in enrichment and reprocessing-related activities, prohibited from ballistic-missile testing and development, and cannot receive nuclear- and missile-related technologies, among other stipulations.

Pompeo said that “thanks to the snapback of U.N. sanctions, Iran is now obligated to suspend enrichment, reprocessing and heavy-water-related activities. We will never let the world’s leading state sponsor of terror obtain the world’s most deadly weapon.”

What is clear is that Washington believes that pressuring Iran will continue to produce positive results.

“I don’t accept the notion that Iran was abiding by the letter and spirit, and now won’t abide,” said Abrams.

Pointing to UNSC Resolution 2231, which calls upon Iran to stop its missile program, Abrams asked, “Does anybody believe they stopped the missile program? So I don’t accept that Iran was abiding and that there will now be a diminished incentive. The only thing that is going to lead Iran to keep those commitments is, in our view, more pressure.”

Berman said the United Nations now has to pass “a crucial test of credibility.”

“Its members can support ‘snapback,’ and work with the U.S. to contain and deter Iran,” he said. “Or they can ignore it and attempt to carry out business as usual with the Iranian regime.”

“If they do,” Berman warned, they risk finding themselves “on the opposing side of the Trump administration’s ‘maximum pressure’ policy, which the White House has made clear that it plans to continue, unilaterally if necessary.”