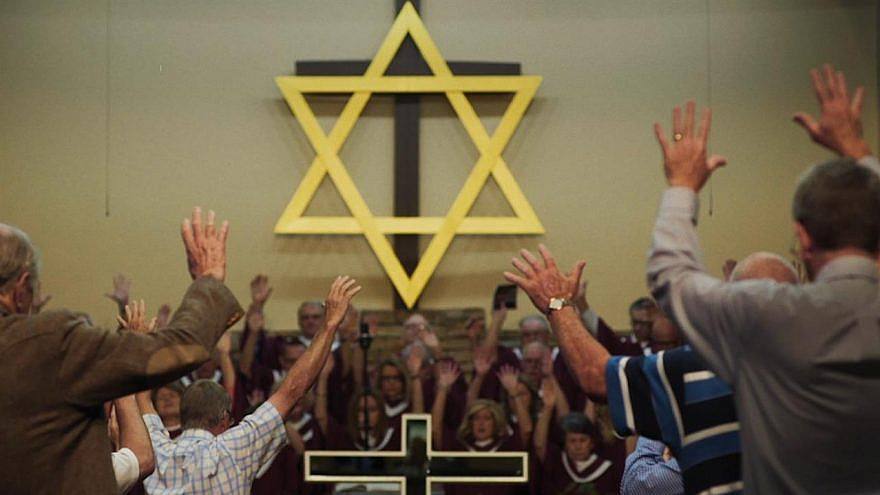 (March 22, 2021 / JNS) CAMERA is calling on PBS to investigate “Til Kingdom Come,” an upcoming documentary on the relationship between evangelical Christians and Israel that will be broadcast on March 29 over concerns regarding quotes that the watchdog groups say may be fabricated or in error.

After comparing the documentary’s video and audio content, it found that the filmmakers had cobbled together wording from statements made on Jan. 28, 2020, by former President Donald Trump to Israeli Prime Minister Benjamin Netanyahu.

It pointed to three different instances of the president’s prepared comments with a spliced-together quote that contradicts the overall focus of his remarks.

The film also transformed an expression of hope conveyed in a passage about Jews, Christians and Muslims visiting holy sites “in the West Bank described so vividly in the Bible” into a phrase suggesting Israeli takeover of land.

“The manipulation is indefensible,” said CAMERA’s executive director, Andrea Levin. “Altering a presidential statement to misrepresent the content of a key policy address is obviously a blatant violation of journalistic ethics. It appears the filmmakers felt the measured language of the actual quote was insufficient to reinforce their storyline so they spliced together separate and different passages to create a more extreme—and false—message. The alteration clearly will deceive viewers.”

The Jan. 28 event was the public announcement of a presidential peace plan that focused heavily on the creation of a Palestinian state and benefits to Palestinians through revived negotiations and independence. “There is, however, no hint in the documentary that a Palestinian state was extensively discussed in the session,” according to CAMERA.

“Manipulation of the quote calls into question the veracity and credibility of every interview and assertion in the video,” added Levin. “PBS needs to vet the documentary very closely. What other interviews have been altered to promote the filmmakers’ political perspective? Obviously, the fabricated quote must be removed from the documentary before it’s aired—and anything else that’s fraudulent.”

The documentary, released last year, was produced and directed by Grammy Award-winning Maya Zinshtein. It was included in numerous film festivals in the past few months.

“Not only does the fabrication demonstrate a breach of trust with the audience, it reveals contempt for the other people interviewed in the film,” said Dexter Van Zile, Shillman Research Fellow for CAMERA, who also denounced allowing Palestinian Christian leader Munther Isaac to posit an equivalence between biblically rooted support for Israel and jihadism.

Rev. Dr. Tricia Miller, Christian Media Analyst for CAMERA, said that “Zinshtein’s film uses a fabricated quote to advance a hackneyed, biased and ugly view of gun-toting evangelical Protestants supposedly engaging in an ‘unholy alliance’ with Israelis living in the West Bank to advance an anti-peace agenda in the Holy Land aimed at bringing on Armageddon at the expense of the Jewish people.”

She noted that “the need to fabricate and distort suggests the narrative doesn’t hold up very well relying on facts. Christian Zionists in the United States have been devoted and reliable supporters of the cause of Zionism since the 1800s, exhibiting genuine concern for the welfare of the Jewish people.”