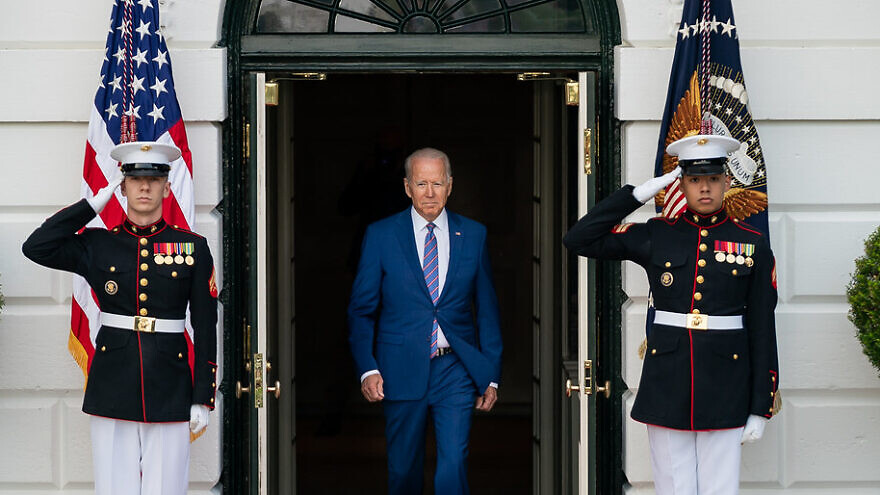 (October 12, 2022 / JNS) Achieving a maritime border agreement between Israel and Lebanon was identified by U.S. President Joe Biden as a “real opportunity” more than a decade ago, a senior administration official told journalists on Tuesday.

“This is something that Vice President Biden identified a decade ago as a real opportunity. And the diplomacy began back then, it continued through now three administrations, and it led to the historic breakthrough today,” said the official during a teleconference with reporters.

He added that Biden views the prospective deal as a “truly historic breakthrough,” especially given that Israel and Lebanon “are technically in a state of war.”

In a separate statement, U.S. Secretary of State Anthony Blinken said: “Following years of mediation by the United States, the governments of Israel and Lebanon announced consensus on an historic agreement to establish a permanent maritime boundary between the two countries. This breakthrough promises to usher in a new era of prosperity and stability in the Middle East and will provide vital energy to the people of the region and to the world.”

According to Blinken, the initiative demonstrates “the power of regional cooperation to meet shared challenges in the Middle East and beyond. It also underscores the transformative power of American diplomacy.”

For his part, Hezbollah chief Hassan Nasrallah on Tuesday welcomed the emerging deal, stating, “We all know that the enemy fears war more than the Lebanese,” according to a report by Kan.

“Despite all of the Israeli threats, we had to stand up with force and prevent the enemy from extracting the gas from [the] Karish [offshore rig] before it responded to demands from Lebanon. This stance should be underlined,” added Nasrallah.

Israeli opposition leader Benjamin Netanyahu has accused Lapid of caving in to the Iranian-sponsored terrorist group.

Israel has set up a rig at Karish, where gas was set to begin flowing in September but was delayed in order to give the talks more time, and amid repeated threats of war by Nasrallah.

The Israel Defense Forces has been on high alert since Hezbollah threatened to fire missiles at the installation if Israel extracts gas before an agreement is reached.

In July, the terrorist outfit sent three unmanned aerial vehicles in the direction of the Karish platform, all of which were intercepted by the IDF.

The latest proposal will reportedly draw a border between the two countries’ exclusive economic zones (EEZs) based on a boundary known as Line 23, and award a disputed area of around 840 square kilometers (324 square miles) to Lebanon, while recognizing Israel’s claim to Karish and to royalties from the section of the Qana field that extends into the Jewish state’s EEZ.

Two senior Lebanese officials on Tuesday were quoted by Reuters as saying that Nasrallah had “agreed” to the terms of the maritime border deal and considered the related negotiations “over.”

Earlier Tuesday, Biden said that Israeli Prime Minister Yair Lapid was “making history” by agreeing to the accord.

In a phone call, Biden told Lapid, “You are making history,” and expressed his appreciation for the trust and confidence of all Israelis who participated in the U.S.-mediated process, according to a statement by the Israeli Prime Minister’s Office.

However, Israeli Minister of National Infrastructures, Energy and Water Resources Karine Elharrar on Tuesday told Army Radio that a signing date for the prospective deal has not been set yet.

Israel is holding a national election on Nov. 1 and it remains unclear whether the agreement will require parliament’s approval.