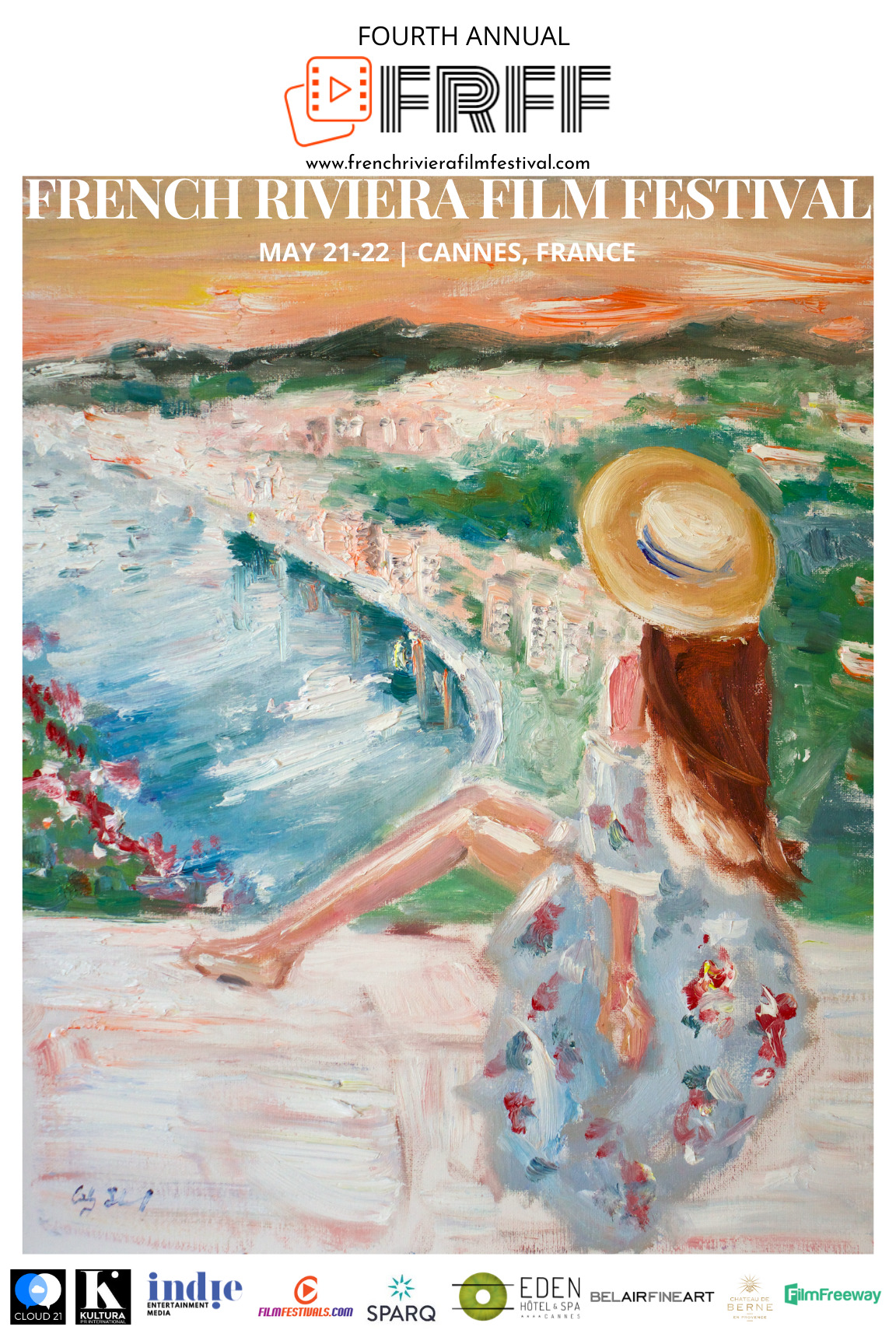 “When we discussed options for our 2022 official poster, we wanted to make it extra special, since we plan to be back in Cannes once again,” comments Muj. “We first discovered the art of Cindy Shaoul in 2021 and felt it was perfectly matched to our creative vision for the festival.  So, we decided to approach Cindy and asked her if she might like to create an original artwork for our festival. We were thrilled when she agreed!”

“I wanted to create a painting that would exemplify relaxed living on the Riviera – a story in one image. What every person dreams of while thinking of this majestic destination. Mysterious, yet captivating, while the lights flicker in the distance. We can only imagine who she is, where she has come from and where she is going,” comments Shaoul.

The fourth installment of the festival will take place once again at the Eden Hotel and Resort in Cannes, France during the time of the Festival de Cannes in May 2022. The annual festival celebrates short film and short-form content from around the globe and features the works of filmmakers from more than 20 countries in the categories of drama, comedy, documentary, sci-fi/horror, animation, experimental, music video, lifestyle, and fashion, as well as new categories for 2022, micro short and activism.

“We are excited to hold the 2022 hybrid festival in Cannes again, live from the Eden Hotel, as well as virtually for those who can’t make in person,” says Chandna. “In addition to showcasing the poster, our plan is to display Cindy’s original painting ‘Girl On The French Riviera’ at our festival receptions.”

Due to the continued uncertainty surrounding public events due to the pandemic, the festival was held virtually in 2020 and 2021, and held intimate, live awards ceremonies each year at The Beverly Hills Hotel. The 2022 edition is planned to be a hybrid event, with finalist films being available to view worldwide via the Sparq platform, the festival’s official streaming partner.  https://frff.sparqfest.live

To kick off the festival, FRFF will also feature the fifth annual Global Entertainment Showcase, scheduled for May 22, 2022 at the International Village at the Palais des Festival in Cannes. More details to be announced soon.

The next submission deadline on Film Freeway is February 13, 2022. https://filmfreeway.com/frenchrivierafilmfestival

Link to 2019 Awards Ceremony, held at the Eden Hotel in Cannes, France:

First launched in 2019 during the time period of the Cannes Film Festival, FRFF recognizes and celebrates short-form content created for film, television, web and all digital platforms. Each year, FRFF invites filmmakers from around the world to participate in the two-day, by invitation only event that includes screenings, gala receptions and a closing awards ceremony. Attendees and participants include filmmakers, industry executives, celebrities, media and influencers.

About Cindy Shaoul – Inspired by whimsey and purity of the feminine form, New York-based, Iranian Jewish artist Cindy Shaoul is known for her Impressionistic and abstract style. She is best recognized for her series ‘Brides,’ ‘Dripping Dots’ and ‘Hearts,’ as well as her ‘Plein-Air’ street scenes of quintessential New York locations. Shaoul’s works can be found in hundreds of private and corporate collections worldwide. 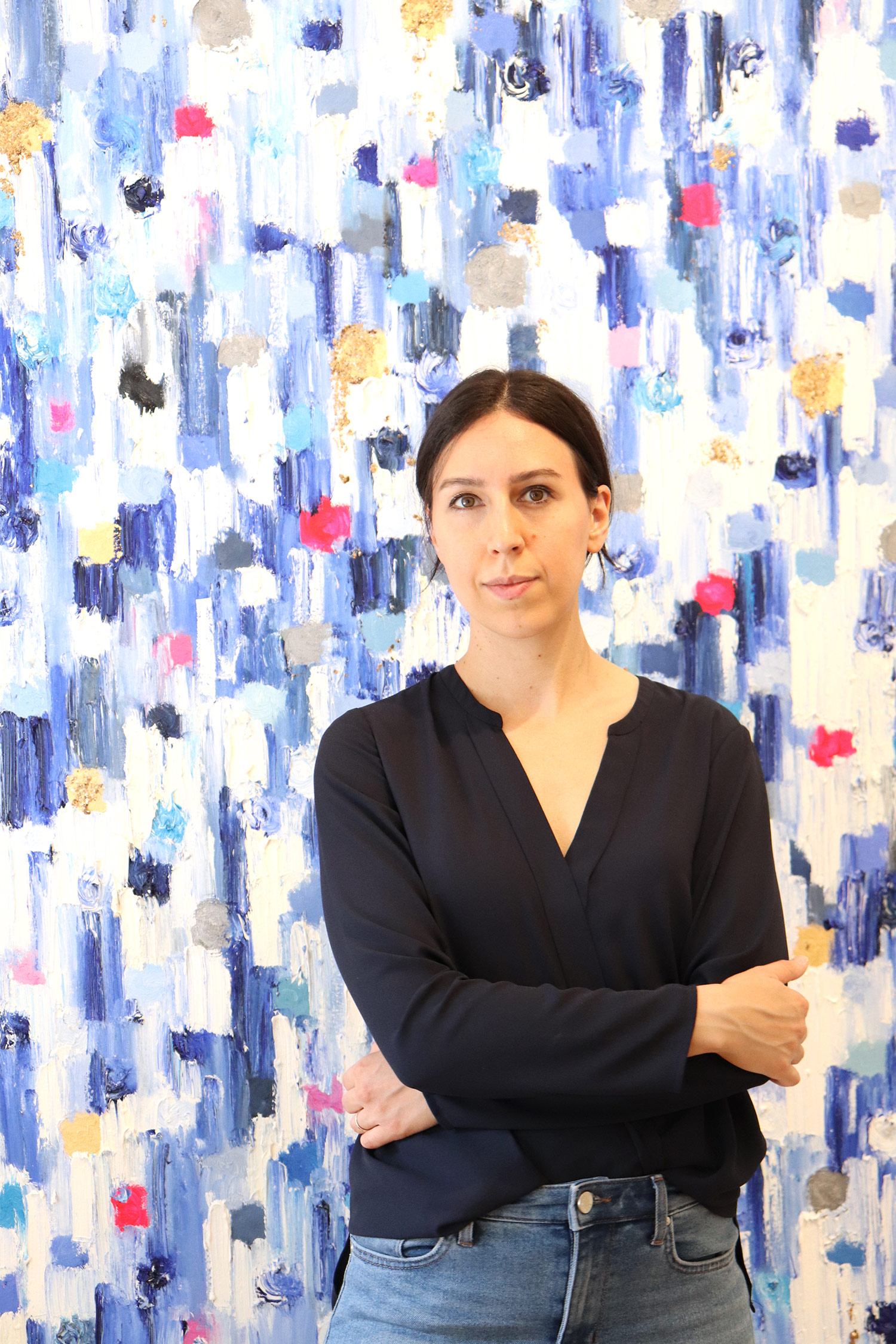 Since her first group show at Parsons School of Design in 2009, her work has been showcased internationally, from Italy to South Korea, and has been shown at various art fairs nationwide including Miami, Palm Beach, Dallas, and New York. Shaoul has had numerous solo exhibitions and has garnered the attention of notable celebrities such as Emma Roberts, Lily Collins, Ashley Park, Catherine Deneuve and John Malkovich.

Her love of painting began at the age of 18 when she was on Thanksgiving break from college. She painted a nine-foot colorful, abstract mural in her mother’s art studio and has been painting ever since. Shaoul later traveled to Israel and Hungary and studied abroad for two years at the Budai Art Institute, which created lifelong experiences that still influence her art today.

Upon her return to New York City, she continued her artistic education at the Art Students League, working under the tutelage of Joseph Peller, Gregg Kreutz, and Tom Torak, where she learned techniques from the great masters of Impressionism. But it wasn’t until she met renowned street artist LA II (Angel Oritz), who previously worked with Keith Haring, that her work would become strongly influenced by street art and graffiti, propelling her reputation and pushing her into the city’s explosive urban art scene. Shaoul and LA II worked on a collection that was an homage to New York’s streets, where Ortiz and Haring began collaborating when they first met. This style of creation heavily impacted Shaoul’s technique, expanding her voice of discovery and moving her hand, not only from impressionism, but to boundary-free expressions in the abstract world. In 2011, Shaoul began her journey as a singer and songwriter, creating music alongside painting.

Republish this article
About The Publishers
French Riviera Film Festival
Publish your organization's press release on JNS Wire
Releases published on the JNS Wire are communicated and paid for by third parties. Jewish News Syndicate, and any of its distribution partners, take zero responsibility for the accuracy of any content published in any press release. All the statements, opinions, figures in text or multimedia including photos or videos included in each release are presented solely by the sponsoring organization, and in no way reflect the views or recommendation of Jewish News Syndicate or any of its partners. If you believe any of the content in a release published on JNS Wire is offensive or abusive, please report a release.