The purpose of these vigils was not only to solemnly remember the over 6 million European Jews massacred during the Holocaust, but also to demand an end to the pervasive and systemic Jew Hatred and discrimination in today’s society. End Jew Hatred is a grassroots movement that does not tolerate the kind of bigotry and antisemitism that history shows will culminate in atrocities like the Holocaust. It fights for the emancipation and liberation of the Jewish people, worldwide.

“Now is the time for a Jewish uprising against the systemic bigotry we have faced for centuries,” said Brooke Goldstein, Executive Director of The Lawfare Project and organizer of the Tel Aviv vigil. “Our message is strong and despite the pandemic, we will gather to demand a seismic shift in the public perception of Jews. As a united Jewish community, we will no longer settle for being treated as second class citizens.”

“Seventy-five years after liberation of concentration camps, we find ourselves in a place where Jew hatred, once again, becomes fashionable,” said Masha Merkulova, Executive Director of Club Z and organizer of the San Francisco vigil (postponed). “We must remain tireless and determined in using every legal and moral opportunity to speak up, educate and act to end this ever-mutating virus. Justice and our history demands that.”

“Today, while survivors of the Holocaust still live, Jews have become the most targeted group for hate crimes.  “Remembrance alone won’t end Jew hatred,” said Andria Spindel, founding Co-Chair of End Jewish Hatred Canada and organizer of the Toronto vigil. “We must do more than remember.  We must end Jew Hatred.”

“Atlanta Israel Coalitions stopped participating in person events at the start of the pandemic.” Said Cheryl Dorchinsky, Executive Director of the Atlanta Israel Coalition and organizer of the Atlanta vigil. “However, we felt compelled to partner with End Jew Hatred to honor the memory of those who perished and unite to speak out against hate and evil. If we sat in silence for every one of the 6 million Jewish men, women and children murdered during the Holocaust, we would be silent for 11.5 years. We must never be silent. Future generations must learn what happened and stand up to hate. Today we grieve with each other and remember that ‘never again’ is more than a hashtag. It’s for us to never forget and move forward together from a place of  strength.” 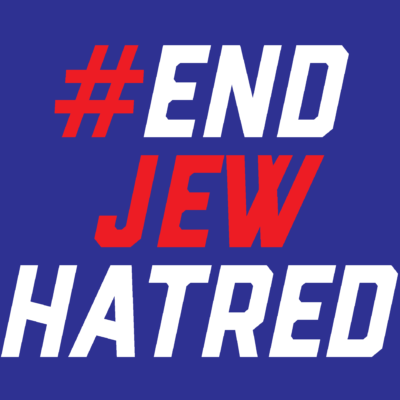 End Jew Hatred
End Jew Hatred is an international grassroots civil rights movement fighting for Jewish liberation and justice through peaceful direct action. It is mobilizing the Jewish community, ensuring consequences for Jew hatred, and is known for forcing tech giants Zoom, Facebook, and YouTube to cancel an online event featuring terrorist Jew-hater Leila Khaled. End Jew Hatred is sparking a new conversation about the Holocaust, centered around healing and emancipation from bigotry.
Publish your organization's press release on JNS Wire
Releases published on the JNS Wire are communicated and paid for by third parties. Jewish News Syndicate, and any of its distribution partners, take zero responsibility for the accuracy of any content published in any press release. All the statements, opinions, figures in text or multimedia including photos or videos included in each release are presented solely by the sponsoring organization, and in no way reflect the views or recommendation of Jewish News Syndicate or any of its partners. If you believe any of the content in a release published on JNS Wire is offensive or abusive, please report a release.