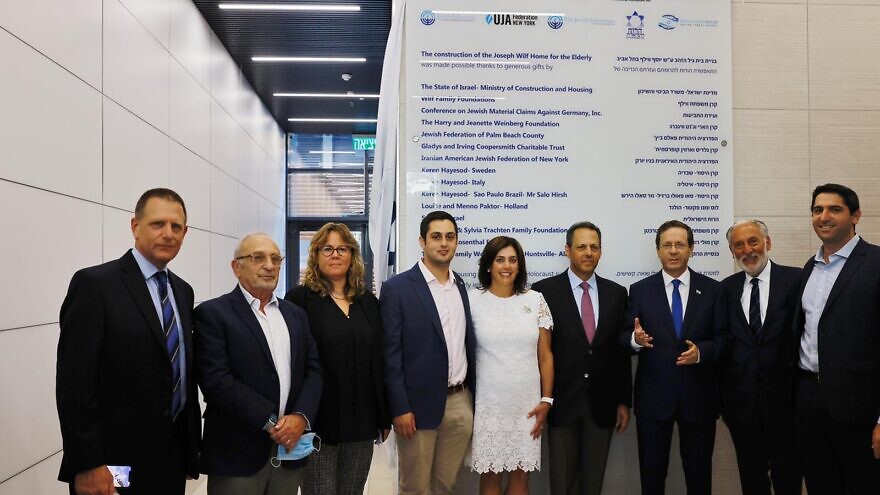 From left: Netanel Lapidot, Senior Department Manager of Strategy and Planning Policy at the Ministry of Construction and Housing; Eric Fingerhut, President and CEO of the Jewish Federations of North America (JFNA); President Isaac Herzog; Mark Wilf, Chair of JFNA’s Board of Trustees; Jane Wilf; Andrew Wilf; Amira Ahronoviz, Director-General and CEO of The Jewish Agency; Ariea Abir, Chairman of the Board of Amigour; Moshe Ashirie, CFO of the Jewish Agency.
Spread the word.
Help JNS grow!
Share now:

Israeli President Isaac Herzog took his first official site visit for a social cause as president today when he toured the Amigour Joseph Wilf Home for the Elderly, a newly-completed facility in Tel Aviv which is part of The Jewish Agency for Israel’s Amigour Public Housing Program.

“I am very moved to be standing here as President of Israel. This is my first visit to an Amigour senior citizens’ home as president and I intend to promote the interests of these vulnerable populations in Israel from the President’s Residence. This is a special project that I personally oversaw as Chairman of The Jewish Agency, which assists the elderly in need who otherwise would not be able to afford to live with dignity,” said President Herzog. “This morning, I inaugurated the United Arab Emirates’ Embassy in Tel Aviv. This is one important strategic interest for the country, to extend our hand in peace to our neighbors. Likewise, we need to extend a hand to Israel’s senior citizens – those who built the country and those who fought the Nazis and made Aliyah (immigrated to Israel). I thank the State of Israel, The Jewish Agency, Mark and Jane Wilf, along with the leadership of the North American Jewish community and Keren Hayesod for their support of this impressive project.”

This 290-unit apartment complex houses senior citizens, including Holocaust survivors and new immigrants. This is the first completed project in a national initiative between the Government of Israel and The Jewish Agency to build 2,650 housing units across the country on Jewish Agency lands with support from global Jewry.

“It is a moral and national imperative to take care of the elderly population in Israel. This project provides an immediate solution for our senior citizens who have yearned for public housing for many years,” said Minister of Construction and Housing MK Ze’ev Elkin. “Honor your mother and father” is not just one of the ten commandments: it’s a way of life. I believe that integrating the older generations into the general population elevates the standard of living in the country as a whole and promotes the idea that the elderly community living in dignity is simply a part of the social fabric in Israel.”

President Herzog, who was heavily involved with this project located on Tel Aviv’s HaShalom Street while he was Chairman of the Executive of The Jewish Agency, today unveiled a placard in the building’s lobby listing the donors who made this initiative possible.

Herzog thanked Mark Wilf, Chair of The Jewish Federations of North America (JFNA) Board of Trustees, his wife Jane, and their extended family for their substantial contributions to the project, named in memory of Wilf’s father, Joseph Wilf, a Holocaust survivor and prominent leader of his local Jewish community in New Jersey.

“When I first heard about the wonderful Amigour project, I knew it would be a very fitting tribute to my father z”l. He was a man who cared so deeply about Israel and its people, and set an indelible example with his drive to keep on doing more to help build the Jewish state,” said Mark Wilf, Chair of JFNA’s Board of Trustees. “It is difficult for me to overstate how proud my family and I am of this center – and how proud my beloved father would have been to see it. It is a place that will provide much-needed housing to Israel’s elderly and will bear his name.”

Amira Ahronoviz, Director-General and CEO of The Jewish Agency, added, “Jewish tradition commands us to look after our elders. The Amigour Joseph Wilf Home for the Elderly is the first phase of a national initiative of the Government of Israel and The Jewish Agency, which will ensure thousands of senior citizens, including Holocaust survivors and new immigrants, the right to quality housing and to age with dignity in the State of Israel.”

Chairman of the Board of Amigour, Ariea Abir, also added: “Mutual responsibility and compassion for the elderly are critical elements to our society. It warms my heart to see the efforts of the people of Israel and world Jewry provide senior citizens with a supportive living environment. I’m proud of this project that adds hundreds of new apartments for the elderly, and there are more to come.”

Republish this article
About The Publishers
The Jewish Agency for Israel
Publish your organization's press release on JNS Wire
Releases published on the JNS Wire are communicated and paid for by third parties. Jewish News Syndicate, and any of its distribution partners, take zero responsibility for the accuracy of any content published in any press release. All the statements, opinions, figures in text or multimedia including photos or videos included in each release are presented solely by the sponsoring organization, and in no way reflect the views or recommendation of Jewish News Syndicate or any of its partners. If you believe any of the content in a release published on JNS Wire is offensive or abusive, please report a release.