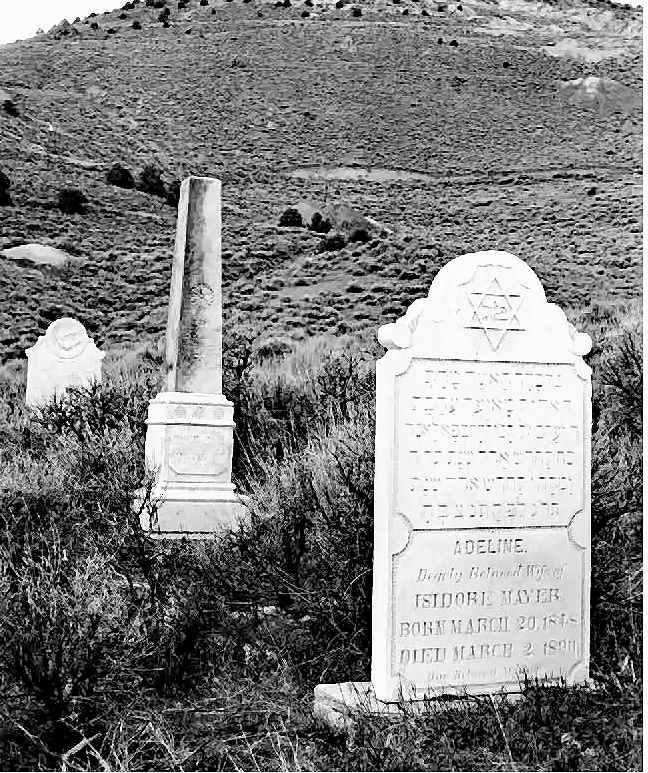 The cemetery as it was—Adeline Mayer’s gravesite.

On October 2, 2022, a special, joint collaborative effort by the Jewish American Society for Historic Preservation (JASHP) and the Comstock Cemetery Foundation (CCF) will occur.

Silver was discovered in the Comstock (Load) in 1859. Jews were attracted to the Comstock because of the freedom, commonality, new possibilities, and financial opportunities the American West offered everyone. They significantly contributed to the Comstock’s economy, government, and society.

The Jewish community, as did their neighbors, experienced the harshness of life in a frontier mining boom town.

Mortality, especially infant and child mortality, was very high. For the Jewish community, a cemetery was a societal obligation.

The Virginia City Historic Jewish Cemetery is dated from the 1860s, just after the B’nai B’rith Lodge # 52 was established. It is sited adjacent to the famed Comstock silver mining Boom Town.

Adeline Mayers gravesite, prior to restoration

In the mid-1960s, a hate crime left the cemetery with one marker out of 24 interments.

For many years, the Jewish cemetery stood simultaneously as a reminder of American Western diversity and, as the Comstock Cemetery Foundation observed, “as a disgrace upon those with no tolerance.”

In 2021, a shidduch, to do good, to do the right thing, was arranged between JASHP and the CCF to restore, with dignity, the Historic site.

The CCF first obtained permission from the Federal Bureau of Land Management, which controls the site today. They devoted 100s of hours of research and work. The CCF’s efforts were imbued with a sense of mission.

The Jewish cemetery was restored.

The Virginia City Historic Jewish Cemetery will be rededicated in a ceremony of history and honored remembrance on October 2.

Republish this article
About The Publishers
Jewish American Society for Historic Preservation
The Jewish American Society for Historic Preservation is a non-profit volunteer organization. The purpose of the Society is to identify and recognize sites of American Jewish Historical interest. The Society sponsors and promotes programs of local and national historic interest. Cooperating with local Historical Societies, Communities, Churches, and Synagogues, the Society encourages dialogue and interactive recognition of the commonality of the American Experience.
Publish your organization's press release on JNS Wire
Releases published on the JNS Wire are communicated and paid for by third parties. Jewish News Syndicate, and any of its distribution partners, take zero responsibility for the accuracy of any content published in any press release. All the statements, opinions, figures in text or multimedia including photos or videos included in each release are presented solely by the sponsoring organization, and in no way reflect the views or recommendation of Jewish News Syndicate or any of its partners. If you believe any of the content in a release published on JNS Wire is offensive or abusive, please report a release.
Never miss a thing
Get the best stories faster with JNS breaking news updates