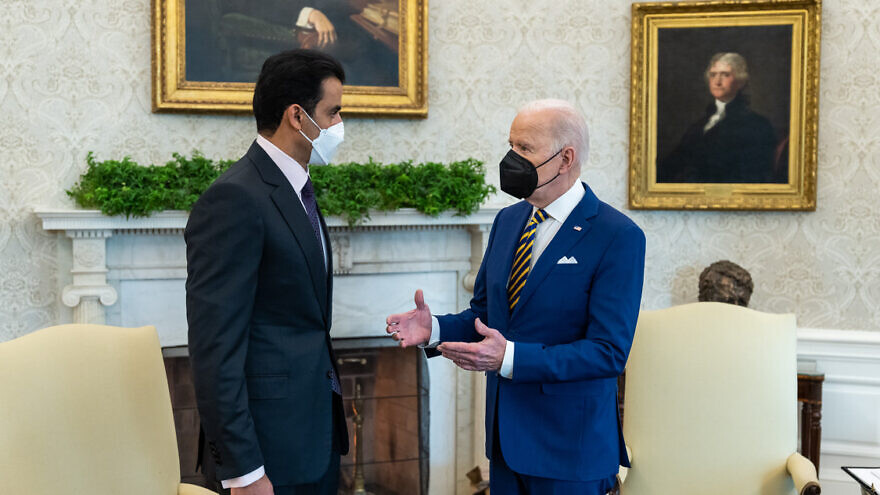 (February 18, 2022 / JNS) U.S. President Joe Biden told Qatar’s emir, Sheikh Tamim bin Hamad Al Thani, earlier this month that the Gulf country is to be designated as a major non-NATO ally, a significant upgrade in relations between the two countries. Yet the designation comes despite concerns over Qatar’s backing of Islamist groups throughout the region, including Hamas.

“Qatar is a good friend, and reliable and capable partner. And I’m notifying Congress that I will designate Qatar as a major non-NATO ally to reflect the importance of our relationship. I think it’s long overdue,” said Biden.

Yigal Carmon, founder and president of the Middle East Media Research Institute (MEMRI), told JNS that the U.S.-Qatari relationship is at odds with U.S. security.

“The relationship between Qatar and the United States is bizarre, and makes no strategic sense,” he said.

This list includes the terror-based Muslim Brotherhood, Al-Qaeda and even organizations affiliated with ISIS, he claimed.

Senior Muslim cleric and Muslim Brotherhood leader Sheikh Yusef al-Qaradawi, a prominent Islamist known for his vicious anti-Semitism and justification of the Holocaust, has been operating for years from Qatar under its protection, said Carmon. “In addition, Qatar has provided shelter to several other jihadi leaders.”

For example, according to testimony in 2003 before a committee in the U.S. House of Representatives, the Qatar Charitable Society is linked to top levels of the Qatari government and played a significant role in funding jihadi groups, including Al-Qaeda, noted a MEMRI report. In addition, the “charity” organization was first named as funding Al-Qaeda during the trial proceedings of the 1998 bombings of the U.S. embassies in Kenya and Tanzania.

“If it weren’t for Qatar, the September 11 attacks might not have taken place,” he continued.

“In 1996, terrorist mastermind Khalid Sheikh Muhammad had been under Qatari protection in Doha. When the U.S. government notified the Qatari emir that they were coming to arrest KSM for his involvement in terrorist plots, KSM disappeared within hours, only to reappear in 2001 as the mastermind behind 9/11.”

Jonathan Schanzer, senior vice president at the Foundation for Defense of Democracies, told JNS, “the Biden decision was driven in part by the looming energy crisis. Qatar is a major global gas producer and provider.”

“With Russia set to invade Ukraine and potentially cut off gas to Europe, the administration needs alternatives. So, some of this may link back to our large air-force base at Al Udeid,” he said.

“But don’t ignore the looming energy crisis. It accounts for quite a bit right now,” he added.

Qatar has ruled out normalizing relations with Israel

Carmon noted that the official Qatari-owned TV channel, Al Jazeera, functions as a mouthpiece for jihadi terror organizations. “It has praised Osama bin Laden and broadcasted his speeches and allowed a sheikh to pledge allegiance to ISIS on air.”

“The Qatari-based channel has also aired calls for terror attacks against American oil installations,” he said. “It even hosted a birthday party—complete with a large cake, fireworks and a band—for released terrorist Samir Al-Kuntar,” a Lebanese Druze member of the Palestine Liberation Front and Hezbollah “who brutally murdered a 4-year-old [Israeli] girl and her father in 1979.”

Qatar’s duplicity regarding the United States is manifest in its diplomacy, too. “Qatar funded the Taliban throughout America’s presence in Afghanistan, yet the American administration is eagerly thanking Qatar for its ‘help’ in preventing an even greater disaster during the withdrawal last August.”

According to an exclusive report by Axios last week, Qatar arranged with the Taliban to resume evacuation flights with Qatar Airways to allow American and other countries to evacuate thousands of their citizens.

Another Axios report, also last week, said that Qatar ruled out normalizing relations with Israel. Al Thani said that while Qatar continues to have a “working relationship” with Israel to help the Palestinians, he does not envision the country joining the Abraham Accords “in the absence of a real commitment to a two-state solution.”

The country has been involved in ensuring that Israel helps move aid and reconstruction supplies to Palestinians in the Gaza Strip and has transferred hundreds of millions of dollars of aid to Hamas, which rules the coastal enclave with an iron fist.

Moreover, the United States acts like it is indebted to Qatar for hosting the Al Udeid Air Base and U.S. Central Command (CENTCOM) headquarters, which Qatar built at the cost of $2 billion, stated Carmon.

There was another option: Both the United Arab Emirates and Saudi Arabia had offered to host the CENTCOM base in Qatar’s stead, but America rejected their offers.

He said “the Qataris should be thanking the U.S. for guaranteeing their security, but instead, Qatar has been strengthening security relations with countries like China and telling the Iranians that ‘only countries along the coast [of the Persian Gulf] should keep security in the region.’ ”