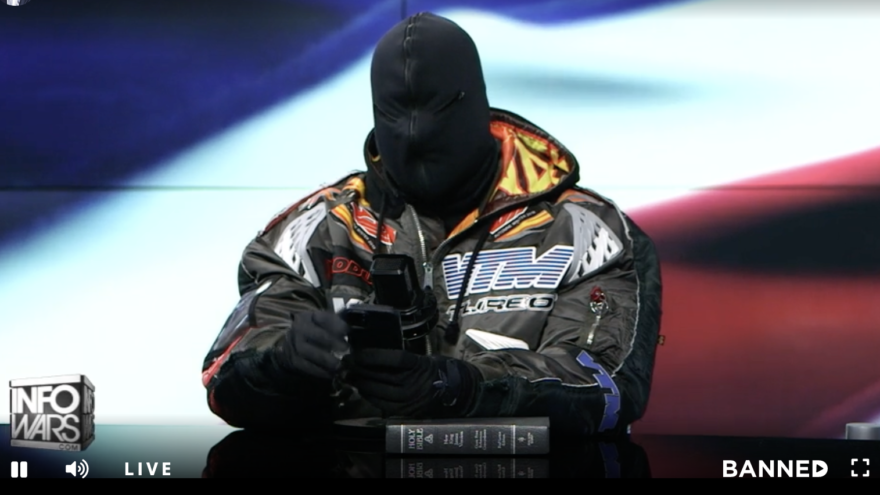 “I see good things about Hitler, also, every human being has value that they brought to the table, especially Hitler,” Ye told Infowars host and conspiracy theorist Alex Jones after he told Ye he is not Hitler or a Nazi.

Ye, who sported a full head mask over his face for the three-hour-long interview, said he liked Hitler, adding that “the Holocaust is not what happened, let’s look at the facts of that and Hitler has a lot of redeeming qualities.”

He also said Hitler was “born Christian” and that “every human being has something of value that they brought to the table, especially Hitler.”

After several comments about Hitler, Jones accused Ye of having a “Hitler fetish,” to which he responded, “I like Hitler.”

He also said he doesn’t like the word “evil” as a description of “Nazis,” adding, “I love Jewish people, but I also love Nazis.”

Viewers were shocked when the unusually-shrouded @kanyewest expressed his love for Nazis to Alex Jones, live-instudio.

Jones replies: "Oh man, well, I have to disagree with that."pic.twitter.com/1kGT9CHs5Y

Ye also attempted to compare himself to Jews hiding in the Holocaust, claiming, “There are Jewish people basically hiding me under their floorboards right now. It’s like a reverse version of the Holocaust.”

“Nazis are kind of cool,” he said.

Ye appeared alongside white nationalist and Holocaust denier Nick Fuentes, 24, calling him a “future president” and joking that Fuentes is not his presidential running mate because he is is too young.

Last week, Ye took Fuentes to Mar-a-Lago, where they had dinner with former President Donald Trump.

During the interview, Fuentes accused Israel of killing President John F. Kennedy to help grow its nuclear program and said he agreed with Ye after he went on one of his rants about Hitler.

When Fuentes said he was pro-Russia and pro-Putin, Ye said, “I am also.”

During the interview, Ye said he refuses to call former Israeli Prime Minister-designate Benjamin Netanyahu “Netanyahu” and instead calls him “Netan” because he doesn’t want to say “yahu.” He repeatedly brought out a small net and a “Yoo-hoo” chocolate milk to mock Netanyahu.

“Who are you to say who the president can meet with?” Ye said regarding Netanyahu criticizing Trump’s meeting with Ye. “Shut the bless up, Netan. You know who I am now, Netanyahu.”

The Republican Jewish Coalition quickly condemned the interview, calling it “a disgusting triumvirate of conspiracy theorists, Holocaust deniers, and antisemites.”

“We vehemently condemn those comments and call on all political leaders to reject these messengers of hate and relegate them to the dustbin of history where they belong,” RJC National Chairman (former) Sen. Norm Coleman and CEO Matt Brooks said in a statement. “Given his praise of Hitler, it can’t be overstated that Kanye West is a vile, repellent bigot who has targeted the Jewish community with threats and Nazi-style defamation.”

“Conservatives who have mistakenly indulged Kanye West must make it clear that he is a pariah. Enough is enough,” they added.

The Jewish Federations of North America stated that Ye’s latest comments “continue to amplify antisemitism and hatred, the breeding grounds for physical violence against the Jewish people. It’s time for those with big platforms who give him a stage to realize they are complicit.”