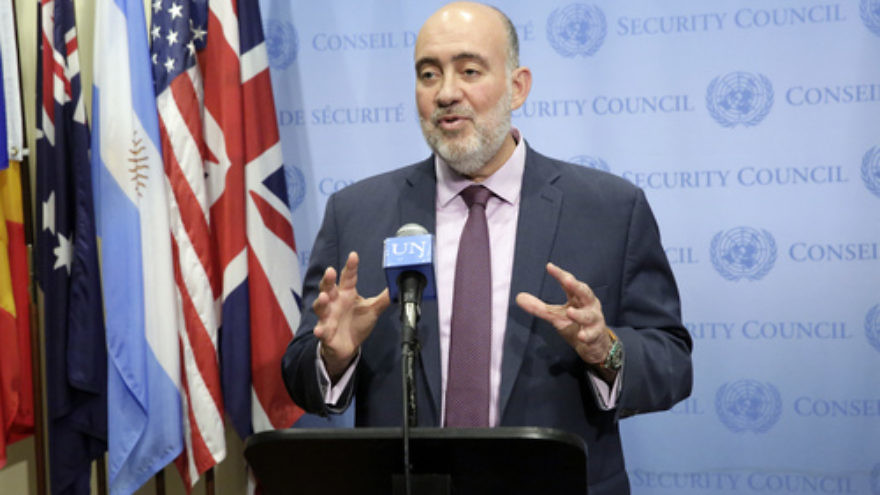 (October 3, 2014 / JNS) The holiest day on the Jewish calendar isn’t among the 10 holiest days on the United Nations calendar. But Israel and many other countries hope that changes by the time next year’s Day of Atonement arrives.

In July, amid Israel’s summer war with Hamas and global anti-Israel protests, U.N. ambassadors from 32 countries wrote a letter to a U.N. General Assembly committee that urged the recognition of Yom Kippur as an official U.N. holiday. The U.N. currently marks 10 holidays, including the Christian holidays Christmas and Good Friday as well as the Muslim holidays Eid al-Fitr and Eid al-Adha, but there is no Jewish holiday on that list.

The messages of Yom Kippur—that “every person’s deeds are weighed on the heavenly scales of justice and the blessings of the coming year are determined by the good deeds performed in the service of others”—are “universal” and as such deserve to be marked by the U.N., the letter said.

The letter came in support of an Israeli initiative on the issue that was launched in May. Israeli Ambassador to the U.N. Ron Prosor had sent his own letter asking the 192 other U.N. envoys to join Israel’s campaign for the holiday’s recognition.

“It is about time Jewish employees at the U.N. won’t be obligated to work on Yom Kippur,” Prosor wrote. “Such discrimination at the U.N. must end,” he added.

Currently, the Israeli Permanent Mission to the U.N. is working within the U.N.’s vast bureaucracy to get Yom Kippur recognized.

“The issue of Yom Kippur is of a cultural/religious nature,” Yotam Goren, a diplomat who works for Israel’s U.N. mission, told JNS.org. “It can be an issue that bridges divisions and speaks to the universal values we all hold closely, including reconciliation, forgiveness, and tolerance. The hope is that these values will prevail and be heralded by all member states in the upcoming negotiations.”

Goren represents Israel on the U.N. Fifth Committee, which is the world body’s administrative and budgetary committee that decides on issues such as holidays. The committee begins deliberating on the Yom Kippur issue this month, with a possible decision coming by December. The matter will be voted on by all 193 U.N. member states.

A number of major Jewish organizations and leaders are also advocating for Yom Kippur’s recognition at the U.N.

“Including Yom Kippur on the calendar would speak to that issue of inclusiveness of the Jewish people,” B’nai B’rith International Executive Vice President Daniel S. Mariaschin, who co-wrote a New York Times op-ed on the issue in August, told JNS.org.

“It would speak to the entire worldwide Jewish community and send a very important message that we hope will resonate to the rest of the world,” he said.

Malcolm Hoenlein, executive vice chairman of the Conference of Presidents of Major American Jewish Organizations, also believes that by recognizing Yom Kippur, the international community could take a step in the right direction.

“Given the traditional hostility of the United Nations to Israel” as well as “the rise of anti-Semitism and [Israel] delegitimization efforts,” recognizing Yom Kippur at the U.N. would be a message “that the modern religion is recognized, and the role of Judaism among the world’s great religions would be enshrined by the United Nations by at least having one [official Jewish] holiday,” Hoenlein told JNS.org.

In a statement provided to JNS.org, the World Jewish Congress (WJC) also linked the Yom Kippur issue to U.N. bias, noting that Israel and Jews have been “subjected to many unjustified tirades and condemnations of dictators in the U.N. General Assembly Hall” and that Israel “is routinely singled out for blame in the U.N. Human Rights Council in Geneva, which has repeatedly showed itself to be biased against the Jewish state.” Most recently, the U.N. Human Rights Council launched a probe into Israel’s Operation Protective Edge in Gaza, but no investigation of Hamas’s actions during the summer war.

“Adding Yom Kippur to the U.N. calendar of holidays would not only be an important demonstration of inclusiveness, but would send the message of hope for reconciliation among peoples and the betterment of mankind,” the WJC statement said.

Yom Kippur’s U.N. recognition “should be a non-controversial issue,” B’nai B’rith’s Mariaschin said. But when the current state of global anti-Semitism and the U.N.’s treatment of Israel over time are taken into account, it’s unclear whether or not the Jewish holiday’s new status will be approved by the U.N. membership. In that context, the decision on Yom Kippur will “be a very good test of the intentions of each member country of the U.N. in terms of how [that member] sees inclusiveness, how it sees Jews in the United Nations,” according to Mariaschin.

“[Yom Kippur is] observed in Israel, but it’s also observed by Jews all over the world,” he said. “If a country were to vote against this proposal on the basis of this being a Jewish holiday, or because Jews are connected to the state of Israel, I think it would speak additional volumes about the U.N. and how it treats Israel and the international Jewish community.”

At the same time, recognizing Yom Kippur should not be seen as a cure for anti-Israel bias, which is “a serious inherent problem in the U.N. system,” Mariaschin cautioned.

“While we want Yom Kippur to be on the [U.N.] calendar… we would not want to see that as compensation for dealing, as is often done, so harshly with Israel,” he said. “It shouldn’t be seen as one or the other.”