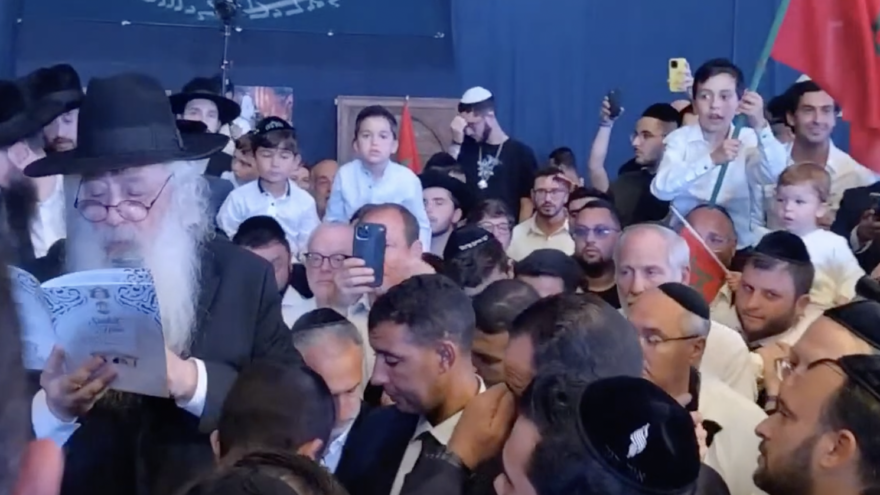 (September 20, 2022 / JNS) Amid warming relations between Israel and Morocco in the wake of the signing of the Abraham Accords two years ago, some 2,000 Jews traveled to Essouira in the North African country last week to celebrate the Yom Hiloula, the anniversary of the passing, of a Moroccan rabbinic leader, Rabbi Haim Pinto. It was believed to be the largest gathering in many years.

A Yom Hiloula (“Day of Festivity”), unlike a regular yahrzeit, is commemorated through joy and celebration.

Rabbi Pinto was born in the Moroccan city of Agadir in 1749 and lived much of his life in the seaside city of Essaouira, known then and until the 1960s as Mogador.

He was known throughout the country and beyond for his great Torah knowledge and for performing miracles. He passed away in 1845, on the Hebrew date of the 26th of Elul, which usually falls in September, and was buried in Essaouira.

Eyal David, the deputy chief of mission of Israel in Morocco, tweeted, as rendered by Google Translate, on Sept. 16, “Yesterday, Essouira Airport received the first flight of the Israeli Company El Al directly from Tel Aviv. Tourists from Israel came specially to attend the annual celebration of Rabbi Haim Pinto’s Hiloula. I am sure they will enjoy discovering this wonderful, historical city that I personally adore.”

A video livestream of the Yom Hiloula celebration was posted online, and the large crowd is shown singing, dancing and celebrating the life of Rabbi Pinto. Those who visited and participated in the Hiloula also had a chance to pray and place notes with requests for blessings and help on the grave of the rabbi.

Much of the program was conducted in French, which is commonly spoken among Jews from Morocco. In the video, people offered their impressions of the event. While most answered in French, one boy speaking in English said, “Everyone’s tefillot [prayers] should be answered. What an experience I had this year! And I am coming back next year, be’azrat Hashem,” with G-d’s help.