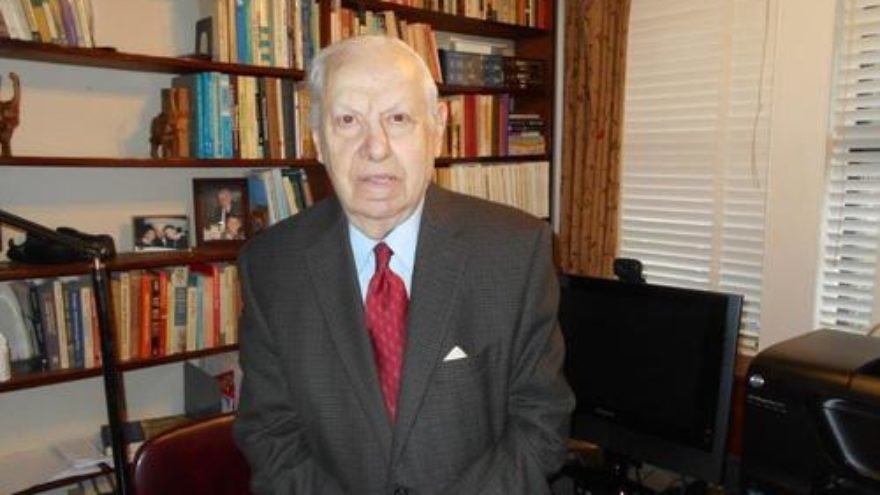 Dr. Randolph L. Braham (pictured), a prominent Holocaust historian and a survivor from Hungary, chose to return an award—the Medium Cross of the Order of Merit of the Hungarian Republic—that he received from the Hungarian government in 2011, in a personal protest against the government's planned Holocaust memorial. Credit: Courtesy Dr. Randolph L. Braham.
Republish this article
1126 WORDS
Spread the word.
Help JNS grow!
Share now:

(March 19, 2014 / JNS) This year Hungary is commemorating the 70th anniversary of the deportation of more than 430,000 Hungarian Jews to concentration camps during the Holocaust. To mark the anniversary, the Hungarian government is planning to erect a statue depicting the German imperial eagle devouring the Angel Gabriel, who represents Hungary.

Jewish leaders and groups have protested this planned statue, arguing that it diminishes the victimhood of Jews during the Holocaust by making it seem as if Jews were merely part of the larger group of Hungarians targeted by the German occupation. The statue also ignores Hungary’s own participation in the deportation of its Jewish citizens under the leadership of the autocratic leader Miklós Horthy, Jewish leaders say.

For now, Hungarian Prime Minister Viktor Orbán, of the right-wing Fidesz Party, chose to postpone the planned Holocaust memorial from March 19 to May 31. But anti-Semitism, a well as ultra-nationalism, is also on the rise in present-day Hungary. The ultra-nationalist Jobbik Party currently occupies 43 seats in Hungary’s 386-seat parliament. Jobbik is the party whose leader, Marton Gyongyosi, called on the Hungarian government in 2012 to make a list of Jews who “pose a national security risk.”

Meanwhile Dr. Randolph L. Braham, a prominent Holocaust historian and a survivor from Hungary, chose to return an award—the Medium Cross of the Order of Merit of the Hungarian Republic—that he received from the Hungarian government in 2011, in a personal protest against the planned Holocaust memorial. In an open letter addressed to the memorial’s executives in February, Braham wrote that the memorial was for him the “straw that broke the camel’s back.”

Braham is a distinguished professor emeritus of political science at the City University of New York who has published and edited 62 books and contributed chapters to 50 others. In an exclusive interview with JNS.org, he discusses his decision to return the Order of Merit, the unfolding of the Holocaust in Hungary, and the country’s modern political climate.

JNS: As a young boy, what were the first signs of repressions you witnessed around you against Jews and how did it impact the Jewish community of you and your family?

Randolph L. Braham: “I grew up in Dej (Dés in Hungarian), a small town in Transylvania, then part of Romania, which had a large, overwhelmingly Orthodox Jewish community. As a teenager in the mid-1930s, I first began to realize the magnitude of the anti-Semitic wave that was sweeping across Europe by following the consolidation of power by the Nazis in Germany, the unfolding of the civil war in Spain, and the passage of increasingly severe anti-Jewish laws in Romania. These domestic laws had a devastating effect on the Jewish community, especially on the poorer strata that included my own family. Business and trade licenses were revoked or made more stringent, extra taxes were imposed, and anti-Jewish acts became ever more frequent.”

JNS: What happened in the wake of the Hungarian Parliament’s adoption of the first anti-Jewish Law in 1938? What was the immediate and long-term impact of that development in Hungary?

RB: “In early September 1940, the northern half of Transylvania, including my hometown, was taken over by Hungary by virtue of an arbitration award by Nazi Germany and Fascist Italy. The anti-Jewish laws then in effect in Hungary were immediately applied in Northern Transylvania, including those that had been adopted in 1938 and 1939. These laws further restricted the educational, social, and economic conditions under which the Jews lived, preparing the ground for the “legislative” acts of the Holocaust era.”

JNS: German forces formally occupied Hungary in 1944. But what were some prior signs of collaboration between the Hungarian and German governments?

RB: “Hungary and Nazi Germany had developed increasingly close ties since 1936. Both countries became engaged in revisionist foreign policies, aiming to undo the peace treaties that were signed after World War I. Hungary, partly in gratitude for the reacquisition of  some of the lost territories, joined Germany in the war against the Soviet Union in late June 1941. By early 1943, it realized that the war would be lost and decided to extricate itself from the German alliance. It was primarily to prevent this that Germany decided to occupy Hungary on March 19, 1944. The occupation enabled the Nazis and their Hungarian accomplices to implement the Final Solution program at a lightning speed. But even before the occupation, the Hungarians were involved in the death of approximately 60,000 Jews, most of whom died serving in so-called labor service companies along the Soviet front and elsewhere. I served in such a company that was deployed in the Ukraine.

“It was only with the aid of the Hungarian authorities that the relatively few SS advisers could bring about the destruction of the Jewish community. They placed the instruments of state power—the gendarmerie, police, and civil service—at the disposal of those involved in the Final Solution program.”

JNS: Why do you believe we are seeing the resurgence of the same nationalistic patterns again in Hungary today? Are you surprised by that?

RB: “The successive Hungarian governments since the end of World War II, both communist and democratic, failed to come to grips with the Holocaust. During the last few years, the democratically elected Viktor Orbán government has been engaged in a history-falsifying campaign, trying to exculpate Hungary from any responsibility by placing exclusive blame on the Germans. As part and parcel of this campaign, this government is actively trying to bring about the rehabilitation of the Horthy era concurrently with the drive to re-introduce the national-Christian principles that had guided it.

“It was partially in protest against these history-cleansing policies of the current government that I decided to return the Order of  Merit and the presidential scroll I had received in late October 2011. The planned statue depicting the German imperial eagle devouring Angel Gabriel, representing Hungary, is part of the current government’s grand design to “prove” to the world that not only the Jews but the Christian Hungarians as well were victims of the German occupation. The statue is envisioned to equate the suffering of the Jews with that “endured” by all Hungarians, including the perpetrators of genocide.

“The Jews have always been used as convenient scapegoats for all political and economic ills. Anti-Semitism has always been present, but subdued during the Communist era (1948-1989), and ever more vocal after the systemic change of 1989. After this year, it became ever more pervasive and was often coupled with Holocaust-denigration and denial. The anti-Semitic drive has increased since the elections in 2010, when the current party in power (FIDESZ) had received a super majority in parliament and the extremist neo-Fascist Jobbik Party close to 14 percent. The latter’s anti-Semitic views and policies seem to be condoned rather than rejected by the official government in power.”