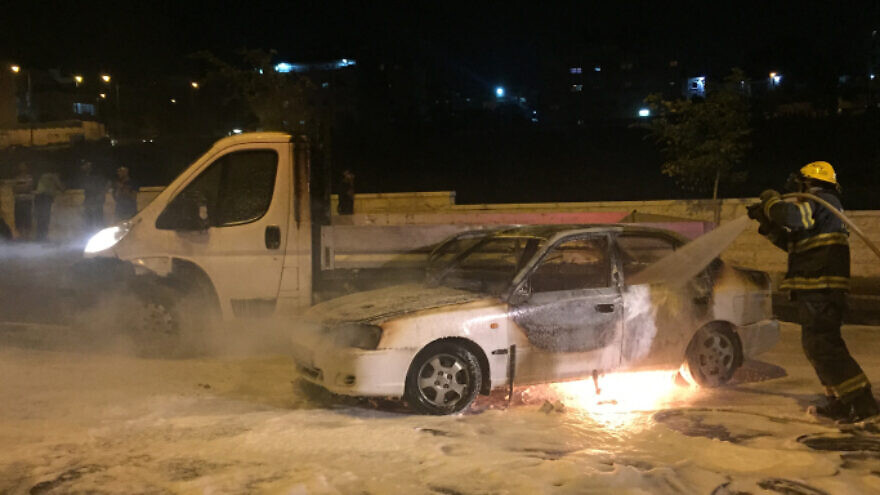 Firefighters extinguish a fire caused by a firebombing near the Arab neighborhood of Beit Hanina in eastern Jerusalem. Two people were injured in the attack, one woman was evacuated to Hadassah Medical center with severe burns. August 3, 2015. Photo by Sliman Khader/Flash90.
Spread the word.
Help JNS grow!
Share now:

(August 2, 2021 / Israel Hayom) Ninety-nine percent of stoning and firebombing attacks in Judea and Samaria in 2019 resulted in plea deals and lenient sentences, according to new research on thousands of violent attacks on Jews in that year.

According to the research data, published by Lavi, a nonprofit that works for civil rights and good governance, and right-wing NGO Im Tirtzu, fewer than a third of those involved in stonings, 408 out of 1,283, received a prison sentence. A majority of such incidents ended with the perpetrators either being put on probation or made to pay a fine.

Of the 865 firebombings reported in Judea and Samaria in that same time year, just 285 resulted in a prison sentence, despite the offense carrying a potential maximum sentence of 20 years.

By contrast, Lavi and Im Tirtzu noted that of the 15 indictments filed by the Jerusalem District Attorney’s Office against Arab residents of eastern Jerusalem for firebomb attacks, just five resulted in a plea deal, while 10 ended with convictions and sentences.

“We can and must put an end to the firebomb and rock-throwing terrorism. The findings should keep us up at night. It now turns out this is the method [of choice for attacks in Judea and Samaria], and the Military Prosecutor’s Office isn’t trying to enforce the law and make a decision in its area of authority, thereby sending the many efforts that have been made to capture and bring the terrorists to justice down the drain,” said Lavi chairman Avichai Buaron.

“We refuse to accept a situation in which the lives of residents of Judea and Samaria are threatened time and again by rioters, and when those rioters are finally arrested, they have an open door in the form of a lenient plea deal waiting for them at the Military Prosecutor’s Office. We call on the military’s prosecution system to get its house in order as far as the Military Prosecutor’s Office’s wholesale signing-off on plea deals with defendants on security offenses is concerned,” he said.

In a statement, representatives for Im Tirzu’s Policy and Research Department said: “The Military Prosecutor’s Office is on the frontlines of the legal fight against terrorism, and as such, it must lead an unrelenting battle against those who initiate and carry out terrorist activity. The picture revealed by the data analysis is incredibly bleak. Instead of being the spearhead in the war on terrorism and striving for contact and victory, the Military Prosecutor’s office prefers to reach plea deals with the terrorists.”

Attorney Maurice Hirsch, a former chief military prosecutor in Judea and Samaria, called the report’s findings “a serious blow to state security. In a place where we can still create deterrence, of all places, the Military Prosecutor’s Office is mitigating punishment. We often see terrorists accused of murder or terror attacks, and these are the same people who were brought to court because of rock-throwing or [firebomb] attacks. If they would have been given a heavier sentence in their youth, they may not have returned to terrorism later on.”