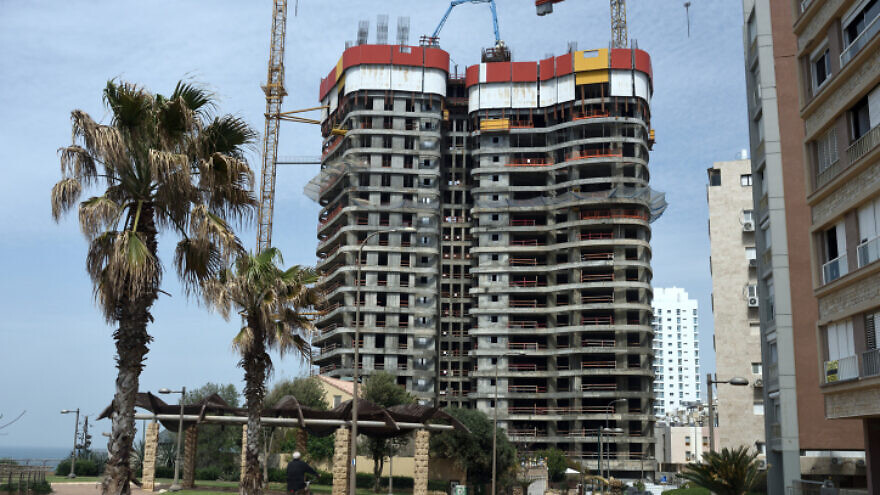 (August 10, 2021 / JNS) Don’t bet on a continued rise in housing prices, Israeli Minister of Housing and Construction Zeev Elkin warned speculators on Aug. 4. “We are launching a massive move to moderate housing prices and eventually to bring them down. … I suggest to the speculators that they reconsider,” he said in a radio interview.

House prices in Israel were up 5.6 percent year-on-year according to a report published by the Central Bureau of Statistics in Israel in June. The average price of a four-room apartment in Israel in the first quarter of 2021 was a record NIS1.65 million, or $507,000, and it requires 146 average pre-tax salaries to buy. Despite this, Israelis are continuing to buy and invest in housing, and mortgage-taking is at record levels.

Elkin’s comments came after the cabinet approved Israel’s 2021-22 budget with several measures to increase housing supply and restrain price increases, among them an additional 30,000 foreign and Palestinian construction workers in order to shorten build time; expedited planning measures; budgets for industrialization of construction; a NIS 600 million (more than $185 million) allocation for urban renewal that will enable local authorities to build the necessary infrastructure for increased population density; and the re-adoption of the Target Price affordable housing program, which will give first-time buyers a discount worth around NIS 300,000 ($92,000) on apartment purchases.

Separately, the Knesset voted to renew and expand the National Committee for Planning and Building Preferred Housing Sites (VATMAL), a regulatory body that has the power to authorize large housing compounds on agricultural land.

The new government isn’t the first to say it will be the one to tackle housing prices. All governments since the 2011 social protests have said they will bring prices down. Nevertheless, the trend continues sharply upward.

So what is different about Elkin’s measures, why should the government even attempt to intervene in the housing market, and what is going to happen to housing prices?

Raul Sarugo, head of the Israel Builders Association, welcomes the measures adopted by the new government. Sarugo tells JNS they are “a step in the right direction” and show that the new government has understood that the “only way to moderate prices is to increase supply.”

Sarugo says that in long term, the government’s move could have the desired effect. But he cautions that the proof of the pudding will be in the execution of measures to increase supply. Steps such as the Target Price plan, he adds, while creating less of a market distortion than the Zero VAT and Fixed Buyer Price plans previously in place are no more than a plaster, and creating affordable housing also increases demand.

While praising some elements of the plan, such as urban renewal and expedited planning, Asher Meir of the free-market Kohelet Policy Forum says it suffers from the same misconception as previous plans: “The assumption is that somehow housing prices are just too high and that there’s something wrong going on.”

“The idea that we’re going to press the magic button and that we can, or we should get housing prices down is, I think, a fundamental misunderstanding of what’s going on, which is that we’re pretty close to the competitive equilibrium, where apartments cost what they’re worth,” says Meir.

The real reason that housing is “very expensive” in Israel, he says, is that “we are a very small, very rich country, and everyone wants to live in modern, good-size apartments in the center of the country. The way to bring housing prices down is to have a recession, but that’s not what we want to have.”

He also notes low-interest rates and tech money continuing to pour into Israel, which generates further demand for investment properties.

What Israel should be doing, he states, is not seeking to influence prices, but to provide assistance to those who can’t afford apartments, for example, through rental subsidies.

“High prices are not a housing issue,” he says. “They are a welfare policy issue.”

“If people can’t afford food, we don’t say, let’s make food inexpensive for everybody. We say, let’s make sure we provide them the means to buy food,” explains Meir. “So, I think the same paradigm is the right paradigm for housing—namely, that we allow the housing market, on the whole, to function and maybe help it along a little bit. And if there are people who can’t afford housing, then we have programs like rent assistance.

“Let’s find those families who are having difficulty paying the rent and help them pay the rent, as opposed to going to the opposite side of the story and influencing the housing market in the whole country to help the 200,000 or so families who really have difficulty paying the rent,” he continues. “We have to help them, but that’s not a reason to be distorting the entire housing market.”

Sarugo however says that the problem is very much one of “a market failure, where supply has outstripped demand” and the government “must act to at least stabilize prices.”

What’s more, he warns, with Israel’s population expected to almost double in the next 30 years, Israel needs to double its housing supply to an average of 100,000 new apartments a year versus some 50,000 currently coming on the market every year, just to meet the demand of natural growth.

Says Meir: “We need to build in the next 30 years the equivalent to what we have built in the past 120 years.”