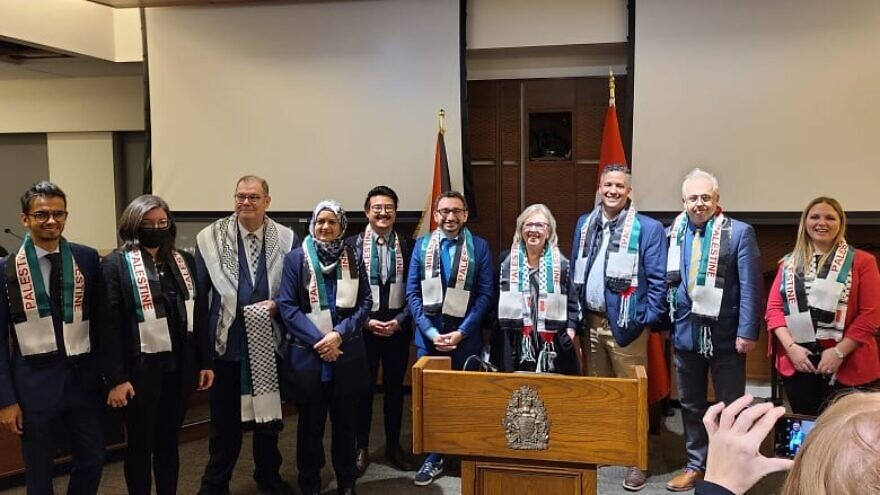 This image of Canadian MPs attending an International Day of Solidarity with the Palestinian People event on Parliament Hill on Nov. 29 was posted by Nazih Khatatba on his Facebook page. Source: Nazih Khatatba/Facebook.
Spread the word.
Help JNS grow!
Share now:

(December 4, 2022 / JNS) The editor of an antisemitic newspaper was a guest at an event hosted by Canadian members of Parliament late last month, and Friends of Simon Wiesenthal Center (FSWC) is demanding an explanation.

Nazih Khatatba, editor-in-chief of “Meshwar,” an Arabic newspaper based in Toronto, was in Ottawa as a guest at an event on Nov. 29 hosted by the Canada-Palestine Parliamentary Friendship Group, chaired by MP Salma Zahid, to mark the International Day of Solidarity with the Palestinian People.

Nov. 29, 1947, was the date on which the United Nations General Assembly adopted a resolution that in effect led to the declaration of the State of Israel on May 14, 1948.

Khatatba has been criticized for espousing Holocaust denial, pushing antisemitic conspiracy theories and celebrating terrorist attacks in Israel through his newspaper, according to FSWC. FSWC has asked for an explanation of how an individual with a history of promoting antisemitism could have been invited to take part in a parliamentary event, and what steps will be taken to ensure this doesn’t happen again.

“It is disturbing that an individual with such a long history of promoting antisemitism could be invited to such an event,” said Dan Panneton, FSWC’s Director of Allyship and Community Engagement. “The rhetoric that Nazih Khatatba espouses makes our society a less safe place for Canadian Jews, and his presence on Parliament Hill, hobnobbing with Canadian political leaders, is reprehensible.”

Liberal MP Zahid refused to denounce Khatatba’s antisemitism or apologize for inviting Khatatba, stating that her office had not directly invited Khatatba, but rather that the guest list, of some 150 people, had been developed by the local Palestinian community, according to the CBC.

“We are not able to research the history of every attendee that responded. As chair of the group, I will continue to be a voice for the human rights of the Palestinian people and for a just and fair two-state solution achieved at the negotiating table,” she said, according to the report.

However, other MPs, such as Minister of Transport Omar Alghabra, released statements saying Khatatba should not have been invited. “What this individual said is offensive and antisemitic and must be condemned,” said Alghabra.

Alghabra, born in Saudi Arabia to a Syrian family, is the former director of the Canadian Arab Federation, a lobby group that claims Hamas and Hezbollah are not terrorist organizations, according to the Toronto Sun.

Speaking in the House of Commons, however, Conservative MP Melissa Lantsman said, “Mr. Speaker, two days ago, Liberal members of Parliament and the Minister of Transport welcomed a dangerous anti-Semite, Holocaust denier and terrorist sympathizer to this place. Nazih Khatatba and Meshwar Media, which the government already gave tax dollars to, has referred to the Holocaust as a ‘Holohoax’ and ‘the biggest lie in history’. This newspaper called Judaism a terrorist religion. Worse yet, this man praised last week’s heinous murder of 16-year-old Canadian teenager by terrorists.

“Will the Minister of Transport denounce this man, his publication and apologize to Canadians?”