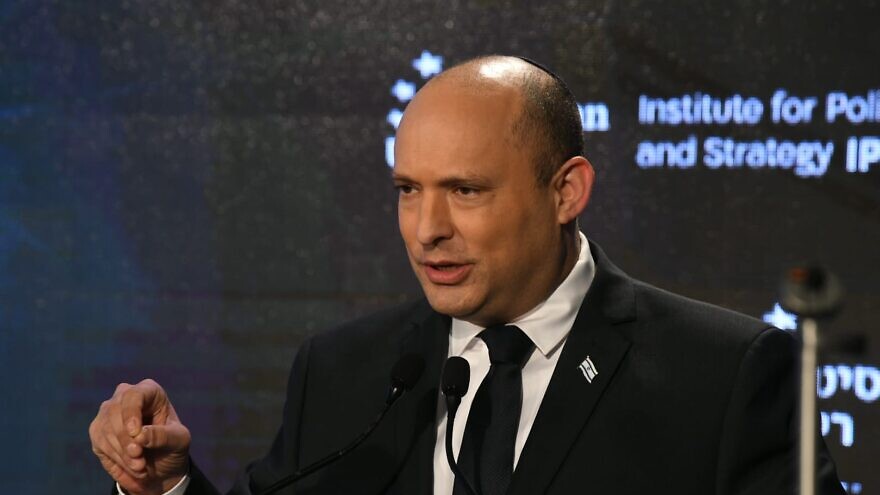 (November 23, 2021 / JNS) Israel must “recalibrate” its strategy with regard to Iran, and will not be obligated by a U.S. return to the 2015 Iran nuclear agreement, Israeli Prime Minister Naftali Bennett said on Tuesday.

In a speech delivered at Reichman University for the Institute for Policy and Strategy’s Security and Policy Conference, Bennett said that while Israel has invested “strategic-level” resources in confronting the threat posed by Tehran, only a “tactical delay” had been achieved.

“For three decades, Israel’s single most significant enemy has been the Islamic Republic of Iran. The resources the country has invested in dealing with the Iranian threat—militarily, diplomatically, economically, technologically, covertly and overtly—are tremendous,” said Bennett.

“It seems that after such a long period of time, we need to look at what we’ve accomplished and examine if we need to recalibrate this vast effort. And the answer, if we look openly and reasonably, is yes,” he added.

Israel, Bennett went on, has failed to achieve the desired result in terms of regional proliferation, and Iran’s nuclear program is more advanced than ever before. Moreover, Iran has succeeded in surrounding the Jewish state, he said.

“Over the past decade, Iran is reflected in every window in the State of Israel. To the northeast, there are Shi’ite militias in Syria. To the north, Hezbollah. To the south, Hamas and Islamic Jihad,” said Bennett

Furthermore, he said, Iran has achieved this while the regime itself sits safely in Tehran.

“They harass us, drain our energies, exhaust us, and they do all this while barely having to leave home. They bleed us without paying a price. It is a convenient arrangement, all told,” said the Israeli premier.

Allowing this asymmetry to develop had been a “strategic mistake” on Israel’s part, said Bennett. Israel, he added, must abandon the approach of chasing after the “terrorist de jour,” and instead “get to the source.”

Iran, said Bennett, is not the giant it is often made out to be.

“They are much more vulnerable than people tend to think. The regime is at its most extreme point since 1979. The Revolutionary Guard Corps is the regime in practice. Over the past several days, I have been looking closely at the demonstrations in Isfahan. This is a regime that cannot provide its citizens with water. Water. It is a regime with a weak economy, and the administration is corrupt and rules with violence and fear,” he said.

The confrontation between the two countries, and between the rest of the world and the Islamist regime in Iran, said Bennett, has reached a “significant” juncture.

“We hope the world does not blink, but if it does, we do not intend to,” he added.

Referring to the planned resumption on Nov. 29 of negotiations in Vienna surrounding a possible return to the 2015 Joint Comprehensive Plan of Action by the United States, Bennett emphasized that Israel’s freedom of action would not be affected.

“We stand at the outset of a complex period. There may also be disagreements with the best of our friends. It would not be the first time. In any event, even if there is a return to the JCPOA, Israel obviously is not a party to the agreement and is not obligated by it,” said Bennett.

“The mistake we made after the first agreement in 2015 will not be repeated. Then, despite all the noise beforehand, once the agreement was signed, it affected us like a sleeping pill. The State of Israel simply went to sleep. We were occupied with other things. We will learn from this mistake. We will maintain our freedom of action.”

Ahead of the resumption of the talks in Vienna, U.S. officials have warned Israel that attacks against Iran are “counterproductive” The New York Times reported on Sunday.

Citing officials familiar with the behind-the-scenes talks between Washington and Jerusalem, the report claimed Israel had been told that while its efforts to undercut the Iranian nuclear program might be “tactically satisfying,” they are “ultimately counterproductive.”

Israel appeared “unmoved” by the arguments, according to the Times.