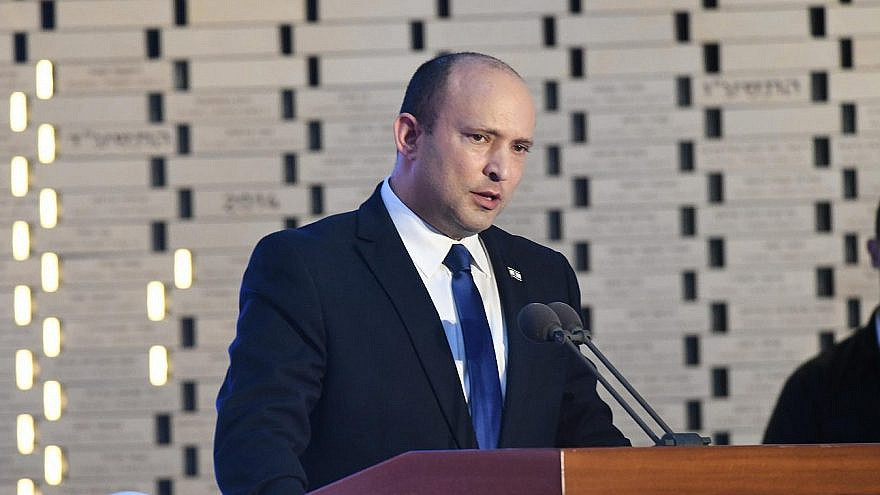 (June 21, 2021 / JNS) Israeli Prime Minister Naftali Bennett warned Hamas on Sunday that Israel will not tolerate a “trickle” of attacks from the Gaza Strip.

Speaking at a memorial service at Mount Herzl in Jerusalem for the soldiers who fell during 2014’s “Operation Protective Edge,” Bennett said that the residents of Gaza-envelope communities “are not second-class citizens.”

“Those who live in Sderot, in Ashkelon, in Kfar Aza or in Alumim have the right to live in peace and security, just like any other citizen of the State of Israel,” he said.

“Violence and terrorism are not natural phenomena or decrees of fate that the State of Israel must simply accept,” he added.

Last week, incendiary devices launched from Gaza sparked multiple fires in southern Israel, destroying an estimated 30 acres of forested area. In retaliation, the Israeli Air Force struck Hamas targets in Gaza. The strikes were the first in Gaza since the 11 days of fighting between Israel and Hamas in May, during which the terrorist groups in Gaza launched some 4,300 rockets at Israel.

As part of “Operation Guardian of the Walls” in response to the barrages of rockets from Gaza, Israeli warplanes struck hundreds of Hamas targets in Gaza, including rocket launchers, weapons-manufacturing sites and commanders’ residences. Israel destroyed much of Hamas’s tunnel network under the Gaza Strip, known as the “Metro,” and also brought down several high-rise buildings that the military said housed Hamas facilities.

The IDF carried out some 1,500 aerial strikes during the operation, as a result of which at least 120 non-combatants and 111 terrorist operatives were killed, according to the Meir Amit Intelligence and Terrorism Information Center.

Bennett emphasized in his remarks on Sunday that Israel’s fight was not with the people of Gaza.

“There is no intent to harm those who do not rise up against us to kill us, and we do not hate those who are held hostage by a brutal and violent terrorist organization, sometimes … [being] intentionally used as human shields [to protect] killing machines,” he said.

However, he added, “our enemies will have to learn the rules: We will not suffer violence, will not tolerate ‘trickles’ [of attacks], will not countenance or be understanding of incitement. Our patience has run out.”

Bennett also vowed to “act resolutely” to secure the return of the Israeli citizens and fallen soldiers held captive by Hamas in Gaza, calling it a “sacred mission.”

The seven years Hamas has held the bodies of IDF soldiers Hadar Goldin and Oron Shaul, who fell during “Operation Protective Edge,” were “seven years too many,” he said.

“These have also been long years of longing and anticipation decreed upon the families of our citizens Avera Mengitsu and Hisham al-Sayed, who are being held captive by Hamas. We will do everything in our power in order to return them to their homes.”

Mengistu, a Jewish Israeli citizen of Ethiopian descent, and al-Sayed, an Arab Israeli, both entered Gaza of their own volition and have not been heard from since. Both reportedly have a history of mental illness.

Prior to the ceremony, Goldin’s parents sent a letter to cabinet ministers and the IDF chief of staff demanding that the return of soldiers’ remains, along with Mengistu and al-Sayed, be a precondition to any settlement with Hamas, according to Channel 12.

Goldin’s parents, along with supporters, protested outside the memorial ceremony.