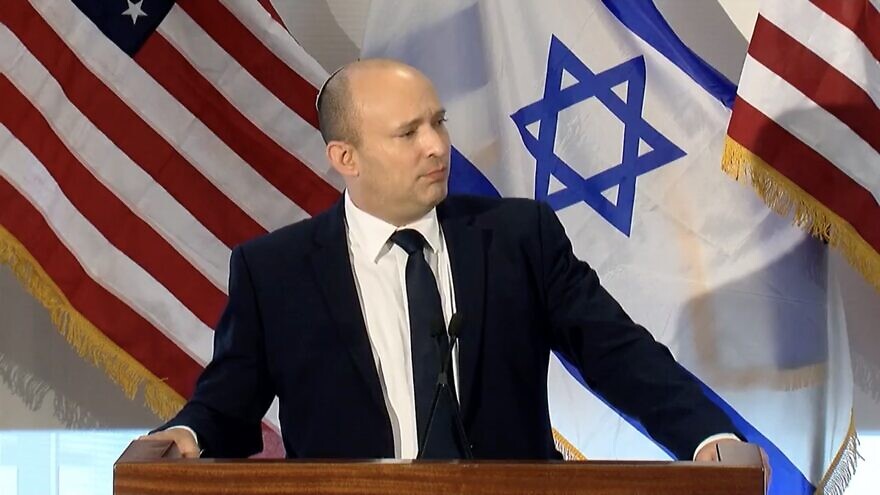 (September 27, 2021 / JNS) Israeli Prime Minister Naftali Bennett continued his theme of referring to Israel as a lighthouse in stormy seas in the Israeli leader’s first in-person event with Jewish community leaders in the United States since he became premier earlier this year.

The Monday afternoon event followed Bennett’s address to the U.N. General Assembly that morning. It was hosted by the Jewish Federation of North America with about 100 leaders from Jewish Federations and other American Jewish organizations at the Safra Center in New York City.

Bennett’s speech to this friendly crowd was relaxed and focused on the shared values of Israel and the American Jewish community.

Due to capacity limits, leaders from some of the 146 Jewish Federation branches from throughout the country were piped in using Zoom, displayed on large-screen televisions in the room.

Seventy-three years after Israel’s founding and enshrining its role as a safe haven for Jews, Bennett said it’s time to rethink the U.S.-Israeli relationship; rather than being a shelter for Jews, Israel’s purpose should now be to shine a light.

“We are about doing good. And I think if you want to inspire the next generation, the younger kids, we have to together work on it,” said Bennett.

Bennett explained why U.S. President Joe Biden says, “If there weren’t an Israel, we would have to invent one.”

Recalling the Sept. 11, 2001 attacks on the World Trade Center, in which Bennett was operating his company nearby on that day, and justifying the U.S. House of Representatives’ recent passage of additional funding for Iron Dome interceptor missiles, Bennett highlighted Israel’s importance to the United States.

“We are 9 million boots on the ground, we are fighting, we are—day in, day out—in touch with those terrorists. We’re gaining intelligence methodologies, and we’re fending them [off] without ever asking America to send even one troop, and we never will,” said Bennett. “We are not the problem. We’re the solution smack in the middle of the toughest region in the world. We’re fighting the problem and solving it—not solving but managing it.”

Bennett said that it’s easy for international leaders to sit in Brussels and debate on how to fight an asymmetric war, but Israel is actually doing it.

“What do you do when they embed a missile launcher into a home?” he asked. “What is the morality? I’ll tell you what’s not. Not doing anything. … So Israel today, represents values in a very difficult situation, not in the ivory towers that are disconnected from reality.”

Israel, he said, is showing how to be a moral country in the face of the world’s worst enemies while continuing to thrive.