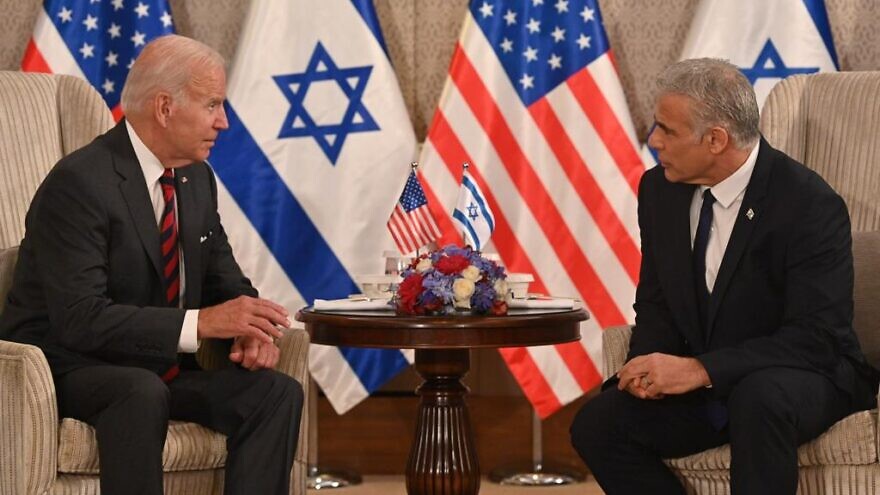 (July 13, 2022 / JNS) U.S. President Joe Biden met with a warm welcome when he arrived at Jerusalem’s Ben-Gurion International Airport on Wednesday and spoke of his long relationship with the Jewish state.

Speakers on the tarmac included Israeli Prime Minister Yair Lapid and Israel’s President Isaac Herzog, both of whom recalled Biden’s first visit to the country in 1973, just days before the start of the Yom Kippur War.

“It is a very personal visit because your relationship with Israel has always been very personal,” said Lapid. “You once defined yourself as a Zionist. You said that you don’t have to be a Jew in order to be a Zionist, and you were right. And in your case, a great Zionist, and one of the best friends Israel has ever known.”

Biden followed Lapid at the podium and said he still held such sentiments, recalling his 10 trips to Israel, including his initial one the year before Richard Nixon became the first American president to visit the country. He added that during his first visit, he had the honor of spending time with then-Israeli Prime Minister Golda Meir and sat next to one of her aides, future Israeli Prime Minister Yitzhak Rabin.

“I realize that I had the great honor of living part of the great history” of this nation, stated Biden. “And I did say, I say again, you need not be a Jew to be a Zionist.”

Starting when he was a senator and then vice president, Biden said he has known every Israeli prime minister since Meir and was honored to have built a strong working relationship with each of them.

“And now, this is my 10th visit, every chance to return to this great country—where the ancient roots of the Jewish people date back to biblical times—is a blessing,” he said. “Because the connection between the Israeli people and the American people is bone deep; it’s bone deep. Generation after generation, that connection grows. We invest in each other. We dream together. We’re part of what has always been the objective we both had.”

Biden said that his affinity for the State of Israel grew from his father, who he called a “righteous Christian” and who taught the family about what happened in the Holocaust and “imbued in us a sense of obligation that we all have.”

He then outlined his agenda for the visit, which is expected to last until Friday.