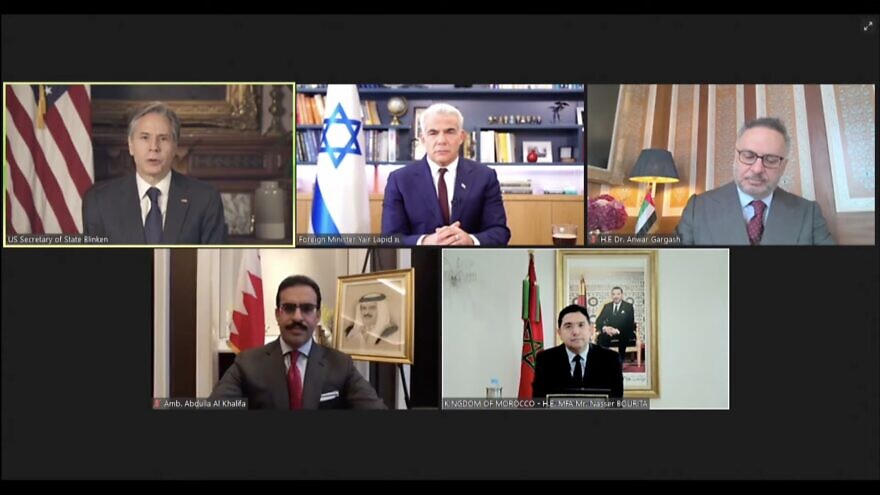 (September 20, 2021 / JNS) U.S. Secretary of State Antony Blinken said that the Biden administration will continue to build on the Trump administration’s successful Abraham Accords between Israel and its Arab neighbors in a virtual event marking the accord’s one-year anniversary on Sept. 17.

Blinken also remarked that 43 years ago on that day, Israel and Egypt signed the Camp David Accords, and that next month will mark the 27-year anniversary of the Wadi Araba Treaty between Israel and Jordan. The recent visit by Israeli Prime Minister Naftali Bennett to meet Egyptian President Abdel Fattah el-Sisi, in addition to negotiations between Israel and Jordan on water and trade, shows that the relationships continue to build.

Blinken listed three areas where the United States plans to build on the accords.

First, Blinken said the United States will help foster the growing ties between members of the accords—the UAE, Bahrain, Morocco, Sudan, and most recently, Kosovo, which established ties with Israel at the beginning of the year.

Second, it plans to deepen Israel’s longstanding ties with Egypt and Jordan, who Blinken called “partners critical to the United States, Israel and Palestinians alike.”

And third, the administration is encouraging more countries to join the signers of the agreement and “widen the circle of peaceful diplomacy.”

“For His Majesty, the signing reflects the profound links between the kings of Morocco and the large Moroccan Jewish community. At the same time, it ties in with the spirit and the dynamic generated by the Abraham Accords,” said Bourita.

After also listing all the new positive developments since that agreement was signed both economic and political, Bourita said that there was a cost for Morocco, such as animosity from a neighboring country that severed its relationship, citing the agreement as one of the causes.

While Bourita did not mention the country by name, Algeria recently broke ties with Morocco as fallout from the deal with Israel and territorial disputes in Western Sahara. The Trump administration promised to recognize Morocco’s sovereignty over the region if it signed the deal with Israel.

‘Peace has this energy to it’

While he said the great challenge of reconnecting the nations was accomplished, there are still challenges ahead to maintaining and growing the ties.

One of the four challenges Bourita mentioned as fundamental was relaunching the Israeli-Palestinian peace process.

“Morocco believes that there is no other alternative to a two-state solution with an independent Palestinian state within borders of June ’67,” he said. “Besides and for His Majesty King Mohammed VI, chairman of Al-Quds Committee, the status of Jerusalem has to be preserved as a common heritage of humanity, as a symbol of peaceful coexistence of the followers of the three monotheistic religions. Morocco has always played a significant, still discreet role in facilitating peace in the past, and is ready to pursue this role today.”

Lapid noted that besides the deaths, including one by assassination, of most of the signers of the Camp David Agreement, the peace remains. “Peace has this energy to it and tendency to last longer than the people who are signing it, and may this peace last long after all of us are gone,” he said.

Lapid said that he launched an initiative that week to bolster the economy and security of the Gaza Strip to stabilize the “Palestinian arena” and invited the member countries to be a part of his initiative.

Al Khalifa said that his country’s foreign minister, Abdullatif bin Rashid Al Zayani, was not able to make it to the morning’s livestream as he was traveling for the U.N. General Assembly in New York, but did send a video statement.

Al-Zayani, who was one of the signers of the Abraham Accords on the White House lawn on Sept. 15, 2020, said that Bahrain is moving quickly to consolidate its ties with Israel and “seize the new opportunities they have created for the benefit of both countries and the region.”

He noted that the members must make sure to sustain the momentum of the cooperation and highlight its benefits.

“We need to demonstrate what genuine regional peace, interdependence and prosperity can mean in practice for the day-to-day lives of all the peoples of the Middle East. And we need a real push to resolve the underlying issues affecting the region—most notably, the importance of a just and comprehensive resolution of the Palestinian-Israeli conflict,” said Al Zayani.

“All of this will require real engagement and support from our friends and allies around the world—not just those involved in the Abraham Accords process, but all countries with a genuine interest in a peaceful, secure, and stable Middle East.”

Gargash wished Lapid and the Jewish people a happy new year at the start of his remarks and said that the UAE is very encouraged by the progress over the past year since the signing of the accords.

“I would say that the main achievement of the Abrahamic Accords in the beginning was breaking the psychological barrier, and I think once that psychological barrier was broken, this was really the difficult part. And following that, a lot of things and opportunities have appeared—people-to-people opportunities, economies, even our ability really to consult on political issues,” he said. “The messages of hope and opportunities are the language that we all like to hear, and these opportunities are in a myriad selection or grouping of things that we can do in technologies, in life sciences, in health, in agriculture, in tourism and in simpler things, really, of allowing Israeli companies to expand and allowing companies from our countries also to expand and partner.”