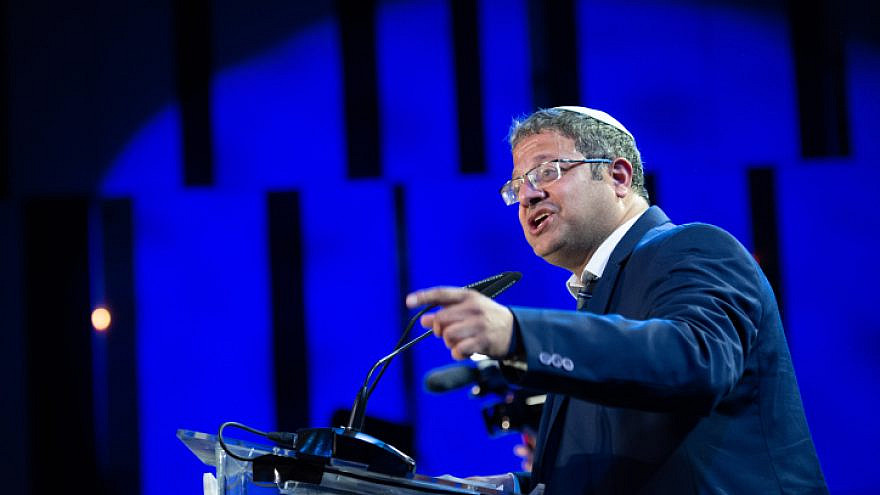 (October 14, 2022 / JNS) Pro-Israel organizations in the U.S. are privately voicing their concerns that two Democratic members of Congress may have meddled in Israeli politics by recently calling on opposition leader Benjamin Netanyahu to exclude a controversial, right-wing politician in his coalition should he win next month’s election.

With just weeks to go until elections both in the U.S. and Israel, the private warning by Sen. Bob Menendez (D-N.J.), followed by a public tweet with largely the same message by Rep. Brad Sherman (D-Calif.), departed from the convention of not commenting on the electoral choices of allies. Menendez and Sherman asked Netanyahu to reject forming a coalition with Member of Knesset Itamar Ben-Gvir, head of the Otzma Yehudit party.

“There can be no doubt that Itamar Ben-Gvir has a troubling past and that his ascension in Israeli politics would draw attention. This is a man who has been rather strident in his views, which offend many in the West, not to mention a fair portion of Israelis for that matter,” Jonathan Schanzer, senior vice president for research at the Foundation for Defense of Democracies, told JNS.

Yet Schanzer noted that it is not typical for the U.S. to get involved in an ally’s elections, saying that while he thinks the statements “are well-intentioned,” they “veer in that direction” of meddling. According to Axios, Menendez warned Netanyahu privately in a meeting in Israel on Sept. 5 that inviting Ben-Gvir into a coalition would hurt American-Israeli bilateral relations as the former prime minister attempts to cobble together an alliance of right-wing parties ahead of the Nov. 1 election.

“As Israel heads towards another election in November, I urge Israeli political leaders from all sides of the political spectrum to ostracize extremists like Itamar Ben-Gvir whose outrageous views run contrary to Israel’s core principles of a democratic and Jewish state,” Sherman tweeted. “These extremists undermine Israel’s interests and the U.S.-Israel relationship, which I and my colleagues have worked to strengthen.”

Ben-Gvir was once a follower of the controversial extremist rabbi and politician Meir Kahane, leader of the outlawed Kach Party, which Israel deemed a terrorist organization.

In 1995, as a teenager, Ben-Gvir appeared on television with a Cadillac emblem that he had broken off of the government car of then-Prime Minister Yitzhak Rabin and said, “We got to his car, and we’ll get to him too.”

A few weeks later, Rabin was assassinated by a Kahane follower.

Ben-Gvir has reportedly been indicted 46 times and convicted eight times for crimes that include rioting, vandalism, incitement to racism and support for a terror organization. On Thursday, he brandished his gun in response to rioters throwing stones at him in Jerusalem.

After being elected to the Knesset in 2021, he built up a record of accusing left-wing Israeli politicians of being traitors and calling Arab politicians terrorists.

Ben-Gvir originally called for Arabs to be kicked out of Israel, but has changed his position to calling for the deportation of Arabs who oppose the state or IDF soldiers, and introducing the death penalty for terrorists convicted of murdering Jews.

A few days after news of Menendez’s conversation broke, Ben-Gvir responded in a statement, saying that he was an “anti-racist” while expressing concern over the characterization by Menendez, who he called a friend of Israel.

Ben-Gvir said that he is instead focused on combating “racist anti-Semitism.”

“Those who are enemies of a strong Israel seek to besmirch me by calling me and my party racist. But the truth is that we’re anti-racist—we are fighting against the racist anti-Semitism fomenting within the boundaries of our homeland,” he said.

“We believe that Israel needs to uproot terror organizations such as Hamas, Islamic Jihad, and Al-Aqsa Martyrs’ Brigades, just as the United States defeated Al Qaida. Like millions of Americans, we believe that peace comes through strength and that Israel’s policies should be based upon the firm enforcement of our right to sovereignty and self-defense.”

According to a director of a major centrist pro-Israel advocacy organization who requested to speak to JNS on background, many Jewish organizations have been expressing discomfort with Menendez and Sherman involving themselves in internal Israeli politics, but are not interested in airing their criticisms publicly so as not to appear to support Ben-Gvir.

Some of these organizations, the source said, are pointing out that Ben-Gvir’s views are no longer far from the mainstream. They pointed out that even Saudi Arabia has recently been proposing a plan to unite Gaza, Judea and Samaria with Jordan into a “Hashemite Kingdom of Palestine” rather than forming a standalone Palestinian state.

“It doesn’t seem to me to be too far off from what a lot of the people who are going to be voting for Ben-Gvir are saying, which is basically … the idea of maintaining residency for Palestinian Arabs who want to make the decision to live peacefully there and then just to fulfill their national aspirations with citizenship in Jordan,” the source said.

The source added that more right-leaning groups are calling Sherman and Menendez’s statements hypocritical, as nobody complained when the Muslim Brotherhood-aligned party Ra’am was made part of the last governing coalition, or that Sherman, who is the second-ranking member on the House Foreign Affairs Committee, did not push to remove Rep. Ilham Omar (D-Minn.) from the committee for her anti-Semitic statements.

Rather than looking at them as friendly advice, the source said that the statements from the two lawmakers are being viewed as threats.

“They’re saying that voting for this guy is going to harm the U.S.-Israel relationship. That’s a threat,” said the source. “Especially to a country and to a society that feels very much dependent on support from the United States.”

Eugene Kontorovich, a professor of law and director of the Center for Middle East and International Law at George Mason University’s Antonin Scalia Law School, said that Menendez and Sherman should be more concerned about other issues.

“It is strange that the U.S. congressmen are concerned about what they believe to be someone’s unacceptable views, being a minor player in the Israeli government, when according to the U.S. ambassador to Israel, the Biden administration is pressuring Israel to not allow Jews to move to or be born in Judea and Samaria,” Kontorovich said. “That is a manifestly racist position, especially given the U.S. does not regard settlements as illegal.”

Other pro-Israel politicians, including Democrats, have avoided making public statements on the matter. Sherman’s office did not respond to requests by JNS to explain the reasoning behind his tweet.

Schanzer said that for better or worse, the U.S.-Israel relationship is held to a different standard.

“On the one hand, I think, we hear legitimate criticism that Israel is consistently held to a different standard and that that’s unfair. On the other hand, this is the special relationship as it is known,” Schanzer said. “And there will always be intense interest on the part of members of congress but also others in the Washington political ecosystem over a wide range of issues touching on Israeli political perspectives.”

The Zionist Organization of America (ZOA) remains the only organization to publicly criticize Menendez and Sherman.

“It’s an outrage for [them] to interfere in Israeli elections. It’s an outrage,” said ZOA National President Mort Klein. “I mean … you didn’t have Israel publicly saying, ‘This hurts U.S.-Israel relations if you have [Michigan’s Rep. Rashida] Tlaib and Omar in your Congress?’”

Klein, who said he considers Sherman a very dear friend, questioned why those who came out with the criticism of Ben-Gvir were, in his opinion, two of the most pro-Israel members of Congress. Yet, the two lawmakers ignored the danger of Israel’s far-left and Islamist parties, he said.

“It’s because the Democratic Party … has moved to the left and become somewhat hostile to Israel, that was never the case years ago,” Klein said. “They were the most pro-Israel members of Congress in the whole country. The most. The third one that was in that group was [former New York congressman] Eliot Engel, who lost. So they see Engel losing, they see the increased number of hostile to Israel members of Congress being elected, and they feel this is good for them politically and they’re willing to do it.”

While not mentioning Menendez and Sherman, the Israel Policy Forum—a Washington D.C.-based think tank that is influential among Democrats—joined the two lawmakers in warning Israel to reject Ben-Gvir and his allied parties, saying that it would affect the U.S.-Israel relationship and citing his record of anti-Arab discrimination.

“We respect Israeli democracy and the right of Israeli citizens to select their leaders and representatives. It is that respect that compels us to communicate to our Israeli friends that a government with Ben-Gvir and any coalition with Otzma Yehudit or Noam (another far-right party) would severely undermine Israel’s standing in the U.S., not only among American Jews but among American political leaders of all stripes,” the Israel Policy Forum wrote in a statement.

The organization added that “any government with Ben-Gvir and any coalition with Otzma Yehudit or Noam will make it harder for American Jews to identify with Israel while eroding a larger sense of Jewish peoplehood. Israeli democracy is for Israelis, but we plead with Israeli voters to take this into account.”