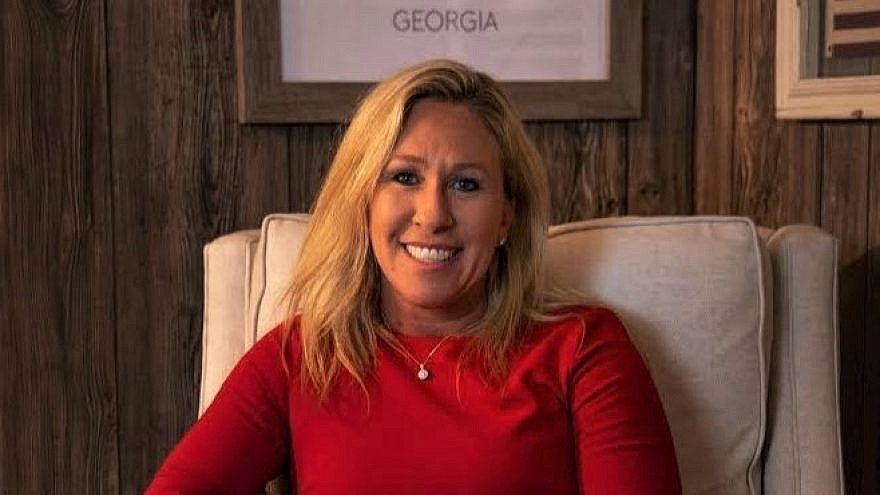 (January 29, 2021 / JNS) Jewish and pro-Israel groups are speaking out against Rep. Marjorie Taylor Greene (R-Ga.), with some calling for her to be removed from her congressional committees over anti-Semitic statements.

“We are outraged by the statements, past and present, of Rep. Marjorie Taylor Greene. She routinely traffics in unfounded conspiracy theories that are often anti-Semitic in nature. As an avid supporter of QAnon, Representative Greene espouses anti-Semitic canards, such as placing blame on ‘the Rothschilds’ for recent wildfires in California and declaring that ‘Zionist supremacists’ are behind supposed nefarious plots,” the Conference of Presidents of Major American Jewish Organizations said of Greene’s comments.

They added that “congressional leaders must hold their members accountable for their words and deeds. It is unacceptable for members of Congress to spread baseless hate against the Jewish people. There must be a swift and commensurate response from congressional leadership making clear that this conduct cannot and will not be allowed to debase our politics.”

Greene, who drew condemnation during her congressional campaign for her support of anti-Semitic QAnon conspiracy theories, has come under more fire in recent weeks for past statements she has made concerning Muslims; the 9/11 terror attacks; the mass school shootings in Parkland, Fla., and Sandy Hook, Conn., and the 2017 mass shooting in Las Vegas; as well as suggesting that leading Democratic officials should be executed.

In a 2018 Facebook post that was recently revealed by the watchdog group Media Matters, Greene apparently made baseless claims about California’s wildfires, which she speculated that the Rothschilds—a longtime wealthy Jewish banking family—along with a California electric company, a solar-power company Solaren and California officials had used “space lasers” to ignite the fires and profit from it.

Meanwhile, the lobbying arm of Christians United for Israel, CUFI Action Fund, is calling on Republican leadership in the House of Representatives to remove Rep. Marjorie Taylor Greene (R-Ga.) from committee assignments over her anti-Semitic statements.

“As we have seen, in recent years there are individuals who subscribe to absurd, dangerous, anti-Semitic lies and react with violence. Leaders of both parties must unequivocally repudiate those who enable these lies to persist,” said the pro-Israel group.

“In light of recent reports that Rep. Marjorie Taylor Greene advanced wild, anti-Semitic conspiracy theories, we call upon Republican leaders in Congress to immediately remove Greene from her committee assignments pending a full review of her past statements. It is incumbent upon the leadership of both parties to get their respective houses in order and condemn all those who traffic in anti-Semitic tropes.”

The Republican Jewish Coalition, which opposed the campaign of the now-congresswoman, said it was “offended and appalled” by her comments and actions.

“We opposed her as a candidate and we continue to oppose her now. She is far outside the mainstream of the Republican Party. The RJC is working closely with the House Republican leadership regarding the next steps in this matter,” said the group.