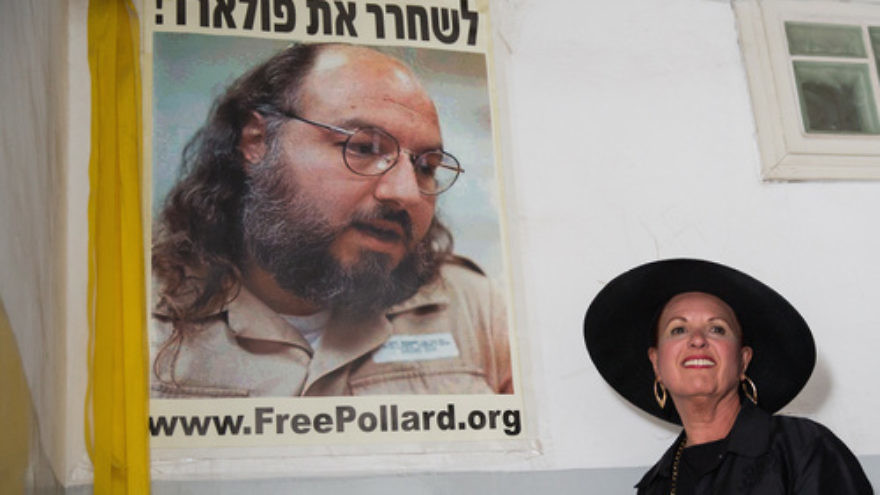 Esther Pollard walks past a poster of her husband, Jonathan Pollard, before speaking to reporters outside of her Jerusalem home on July 29, the day after it was announced that Jonathan, jailed for nearly 30 years over giving Israel classified information on America, will be released in November 2015. Photo by Flash90.
Republish this article
895 WORDS
Spread the word.
Help JNS grow!
Share now:

In the days leading up to the July 28 revelation that the U.S. has granted Pollard parole and that he will be released from federal prison on Nov. 20, that charge was made by former State Department counsel Abraham Sofaer. Commenting on then-unconfirmed reports that Pollard would be paroled, Sofaer—who was part of the U.S. team that investigated the Pollard affair in the 1980s—claimed Pollard “created a terrible situation for American Jews who then obviously [were] all the more suspected.”

The fear that Pollard’s actions would cause anti-Semitism was articulated at the time of his arrest by many prominent American Jews, conservatives and liberals alike. Well-known political columnist William Safire wrote that Pollard had encouraged “anti-Semites who charge that Jews everywhere are at best afflicted with dual loyalty and at worst are agents of a vast fifth column.” Henry Siegman, the former director of the American Jewish Congress, charged that the affair had caused “discomfort” to U.S. Jews and left them feeling “compromised.”

Many Israelis, however, saw things differently. Shlomo Avineri, a Hebrew University political science professor who worked as director-general of the Israeli Foreign Ministry under prime minister Yitzhak Rabin, publicly deplored the “nervousness, insecurity, and even cringing” of U.S. Jews.

“Today, American Jewish leaders by their protestations of over-zealous loyalty to the United States at a moment when no one is really questioning it, are saying that America in the long run is no different from France and Germany,” Avineri wrote in 1987. “When you have to over-identify, there is no other proof needed that you think that your non-Jewish neighbors are looking askance at your Americanism. You are condemned by your own protestations of loyalty and flag-waving.”

Measured by the traditional method—the Anti-Defamation League’s annual tally of anti-Semitic incidents—there is no evidence anti-Semitism increased as a result of the Pollard affair. In fact, in 1986, the year following Pollard’s arrest, the number of anti-Semitic incidents in the U.S. actually decreased by 7 percent. That figure increased the following year, and each year through 1991, but then in 1992 it decreased again (by 8 percent), before rising again in 1993. It is hard to see how Pollard could have had anything to do with this ebb and flow.

Measured another way, by the appointment of Jews to senior government policymaking positions, there likewise seems to be little evidence to confirm the Pollard-linked fears about Jews in government becoming distrusted. In fact, Jews became even more prominent in Israel-related positions after the Pollard arrest than before it: Daniel Kurtzer, Dennis Ross, Aaron Miller, Richard Haas, Martin Indyk, and others played significant roles in shaping American policy toward Israel throughout the 1990s and beyond. Evidently, their superiors felt they could trust them to faithfully implement U.S. policy—even when it involved tension with Israel—despite the fact that they were Jews.

So much for the dire prediction by American Jewish leaders made to the Jerusalem Post in 1987 that Pollard’s actions “might make it considerably harder for Jews to rise to high positions in the State and Defense Departments.”

Even many years after Pollard’s arrest, such fears lingered. U.S. Navy Rear Admiral Sumner Shapiro, discussing the Pollard case with the Washington Post in 1998, complained, “We work so hard to establish ourselves and to get where we are, [only] to have somebody screw it up.”

But the idea that Pollard had “screwed it up” for other Jews in the U.S. government was more speculation than reality. Political scientist Daniel Elazar, in his analysis of American Jewish responses to the Pollard arrest, was “astounded” by “the level of American Jewish insecurity.” He found that the dual loyalty issue “was raised almost exclusively by Jews,” not by non-Jews. He noted that it was brought especially frequently by Jews in the media, “most of whom were highly assimilated but still apparently needed to demonstrate their ‘bona fides’ as Americans.”

Jewish activists in the U.S. during the Holocaust years encountered similar fears among Jewish leaders. The president of the American Jewish Committee tried to block publication of a Bergson Group newspaper advertisement in 1943, reasoning that sharply worded criticism of the Allies’ Jewish refugee policy “could well bring on pogroms in the U.S.” New York Congressman Sol Bloom sought to have the group’s leader, Peter Bergson, deported on the grounds that “he would eventually provoke sufficient antagonism among the citizens of the United States to cause anti-Semitic pogroms.” Prominent Reform Jewish leader Rabbi Stephen S. Wise went so far as to claim that Bergson was “as great an enemy of the Jews as Hitler, for the reason that his activities could only lead to increased anti-Semitism.”

In the end, Bergson was not deported, the controversial newspaper ad (and nearly 200 others) were published, and the Bergson Group even organized a march by more than 400 rabbis to the White House. Yet no pogroms ensued.

Jewish fears of being seen as disloyal were just as misplaced in the 1940s as they were in the 1980s, and as they are today. Abraham Sofaer’s worries about Pollard are simply not supported by evidence.

Dr. Rafael Medoff is the founding director of The David S. Wyman Institute for Holocaust Studies, and coeditor of the “Online Encyclopedia of America’s Response to the Holocaust.”