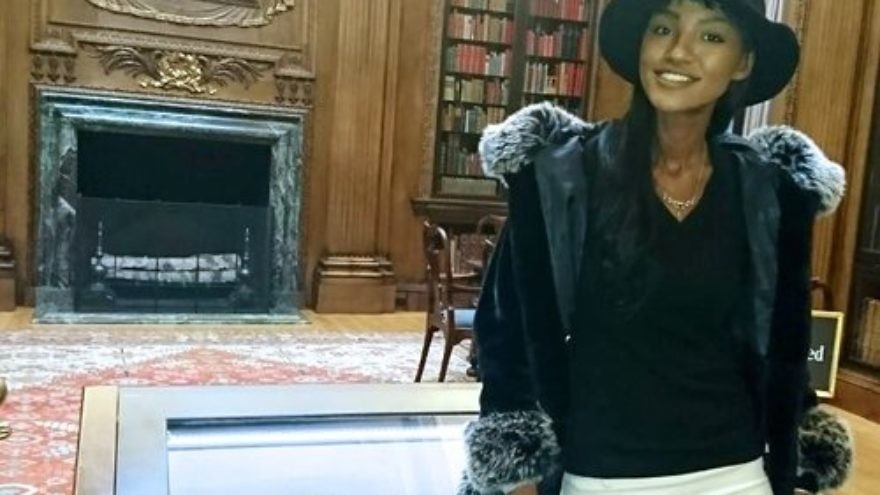 In Ethiopia, Yityish “Titi” Aynaw and her fellow villagers always dreamed of living in Israel.

“From as far back as I can remember, I was always told that I am Jewish and that I must live in Jerusalem,” said the former Miss Israel, who in 2013 became the first Ethiopian to hold the title. “I imagined that Israel would look like how it’s described in the Bible, as the land of milk and honey…like a fairytale.”

This week, Aynaw commenced her third Israel advocacy speaking tour on U.S. college campuses, in what she described as an opportunity “to give back” to the country that gave her a new life.

Since being crowned Miss Israel, Aynaw’s meteoric rise has seen her become one of Israel’s top models, a prominent media personality and a staunch advocate for the Jewish state. Along the way, she has shattered a cultural glass ceiling and paved the way for other young Ethiopian-Israeli women to follow in her footsteps.

Aynaw, 26, comes from humble beginnings—walking barefoot as an orphaned child in the Ethiopian village of Gondar. Both of her parents died by the time she was 9. After her mother’s death, Aynaw and her brother lived with their aunt before making aliyah in 2004. In Israel, the siblings moved in with their grandparents, who had already arrived in the Jewish state.

In the following interview with JNS.org, Aynaw discusses the challenges of aliyah, her work ethic, serving in the IDF, becoming Miss Israel and Israel advocacy.

JNS: What was your biggest challenge upon moving to Israel?

Yityish Aynaw: “Learning Hebrew. My brother and I went to a religious boarding school in Haifa, and I was the only girl there. My brother had other guys in the class who he could learn with, but I was alone….It was really challenging…I would go to the library alone and try to learn. It took me about three months to learn to speak Hebrew. Learning to read and write took me more than a year.”

Was becoming a model one of your early goals?

“Everyone always told me that I should [become a model]. I said that I would, but only after I finished school, and just as a small job to make a little bit of money. It’s not something that I thought I would do very seriously.”

How was your experience in the IDF?

“I was in the army for three and a half years in a very tough position. I was a commander for the guys who stand at the checkpoints to Jerusalem. I trained them to be professional soldiers at the checkpoints. I was the only girl in my platoon. It was really tough.”

How did the men respond when they saw a woman who looks like a model telling them what to do?

“At first they couldn’t believe they had a female commander, but in the army, if you’re good at what you do, it doesn’t matter if you’re a girl or a boy…After I had several meetings with them and was tougher with them, I earned their respect.”

Then they must have been even more surprised when you became Miss Israel.

“Yes. By the end of my service, I was the commander of my platoon. I had around 300 boys under my command, and four months after I left the army I became Miss Israel, and they were shocked. For me, it was so weird that my soldiers would see me in a swimsuit on television, walking and smiling, and just a few months before I was with them running, training, yelling at them, doing all of these tough things.”

How did it feel to become the first Ethiopian Miss Israel?

“I didn’t think it would ever get this big….For me to be Miss Israel, it didn’t just give Ethiopian olim hope, but all immigrants to Israel. I am proud that I made history….I am happy that this happened to me because it changed my life.”

Have you ever experienced racism in Israel?

Can you describe the “Titi Project,” one of your current initiatives?

“There are many children in my neighborhood [in Netanya] who have too much free time after school, and they get into trouble….Their parents are working all of the time and don’t have the money to pay for extracurricular activities for the kids. I raised money in the U.S., and we opened the Titi Project in the center of my neighborhood. It gives the kids extracurricular activities like basketball, tutoring and lessons on how to make jewelry. At first I thought these things would just keep the kids busy after school, but then the kids really started doing well in their studies. I love this project. My dream was to keep them far away from trouble, but it turned into something bigger than that.”

What are your goals for this U.S. college campus tour?

“I’m really happy to do this with Media Watch International and JNF….I’m speaking about my life’s story on this tour, and through that I want people to understand more about Israel. Many of the things they hear in the media about Israel are not true. I have a really great opportunity with this, to help people understand that we have a really nice country. It gives me the chance to give back to the country that gave me another life, and I’m proud to do that.”