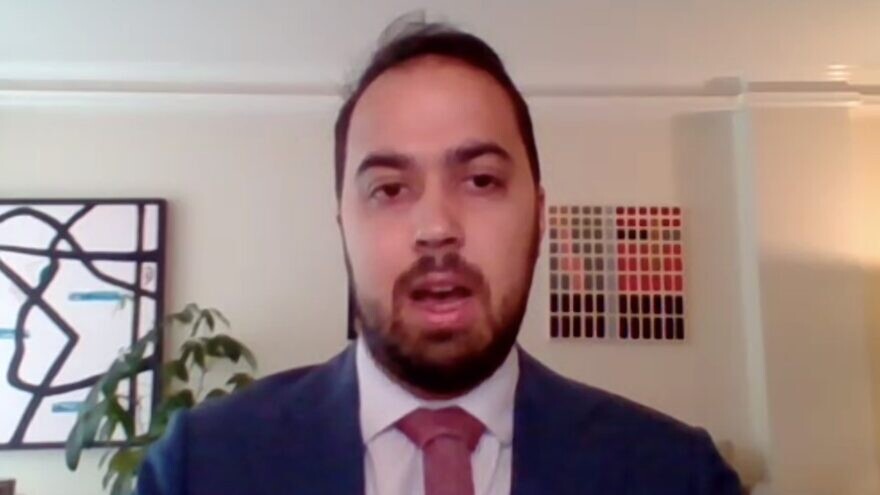 (April 1, 2022 / JNS) The man who made public many of the latest details now being discussed as talks to re-enter the Iran nuclear deal—formally, the Joint Comprehensive Plan of Action (JCPOA)—with Iran is near the conclusion, according to a webinar hosted by the Endowment for Middle East Truth (EMET) on Wednesday. Gabriel Noronha said the stakes of what the United States was giving up in the negotiations were too great to keep from the public and lawmakers.

Noronha, who served as special advisor for Iran in the U.S. State Department from 2019 to 2020, and as a Republican staffer on the Senate Armed Services Committee from 2015 to 2019, said he was compelled to come forward with details of the negotiations by his former colleagues at the U.S. State Department, National Security Council and the European Union because they were appalled at dangerous concessions to Iran being made by American negotiators, led by U.S. special representative for Iran Robert Malley.

Noronha published many of the developments in a Twitter thread on March 4 as well as in a Tablet article on March 8.

The professional staffers contacted Noronha, hoping he can get the information to the public, as well as lawmakers on Capitol Hill, who they said needed to know what was happening behind closed doors in the talks being held in Vienna.

EMET founder and president Sarah Stern began the webinar by setting the context of the talks, where at first the Biden administration promised a longer, stronger deal. But when Malley arrived in Vienna, he was not even allowed in the negotiation room as discussions were being conducted indirectly between the United States and Iran. Instead, the negotiations are being handled through third parties, such as the Russian emissary to the Iran nuclear negotiations Mikhail Ulyanov.

“As this horrific war is being executed by Russia in Ukraine, we have subcontracted our negotiations to the Russian emissary Mikhail Ulyanov,” said Stern. “That is why I consider this highly irresponsible diplomacy or even diplomatic malpractice.”

She played a video of Ulyanov in an interview praising the Iranian negotiators, and how Tehran is getting more from the negotiations than anyone expected, calling it positive results.

After being introduced by Stern, Noronha spoke of the urgency felt by American negotiators to rejoin the JCPOA, which necessitated them to make major concessions on economic relief to Iran. The career officials that spoke with Noronha believed that Congress should be made aware and counter by imposing sanctions on a wide range of Iran’s belligerent activities in the region, such as arming Hezbollah in Lebanon and Houthi rebels in Yemen, as well as on its ballistic-missile program.

Most concerning, according to Noronha, was the sanctions relief being offered to some of Iran’s worst terrorists, such as Iranian President Ebrahim Raisi, who was involved in mass executions of political opponents of the Iranian regime in the 1980s; Iran’s Supreme Leader Ayatollah Ali Khamenei; former Islamic Revolutionary Guard Corps (IRGC) commander Mohsen Rezaee; Iranian Minister of Foreign Affairs Ali Akbar Velayati; and others.

Noronha said that those individuals deserved far worse than sanctions, but without military intervention, sanctions are the best form of justice available to punish Iranian leaders and should not be loosened. Yet the United States would unfreeze their foreign assets and allow them to travel abroad.

He further said that the negotiations are interlinked with Russia’s attempts to also circumvent sanctions by the United States and European allies placed on Russia due to its invasion of Ukraine. Russian energy-sector companies have significant interests in Iran, including a $10 billion contract by Russian state nuclear-energy corporation, Rosatom, to build nuclear power plants in Iran.

Russia is also using the deal to help it reshape the world order he said, to benefit itself, Iran and China, as well as cause harm to the United States and the West.

“Shockingly,” he said, the American negotiators are empowering them.

In what he called the “deal with the devil,” the United States is willing to trade nine years of Iran not enriching uranium while giving Iran the world in return.

The unfrozen Iranian assets and sanctions relief would undoubtedly reverse the work of the Trump administration’s “maximum pressure” campaign, which was successful in reducing funding to many of Iran’s terrorist proxies, said EMET. But under the Biden administration, Iran has already resumed its malign activities and increased its security budget significantly.

This includes increased funding for Iran’s Ministry of Intelligence and Security and the IRGC.

Stern pointed out that the United States is negotiating with a regime that still has many American former and current administration officials on assassination lists.

She asked Noronha what could be done to stop the deal, to which he answered to put more pressure on Congress to do whatever it can to reassert its right of oversight on any agreement and not allow the administration to back out of non-nuclear sanctions Congress itself has placed on Iran.

His work in revealing many of the concessions being given to Iran by American negotiators has caused members in the U.S. House of Representatives and Senate from both parties to express serious reservations about the deal being negotiated.

The administration, he said, is banking on the distraction from the issue for Congress and the American public caused by the war in Ukraine.

“Congress has a voice and needs to make its voice heard,” said Noronha.

Despite Congress urging the president to submit a final deal for review to Congress under the Iran Nuclear Agreement Review Act of 2015 (INARA), Noronha said the administration is already working with its legal team to find ways to avoid it. Most likely, their argument will hinge on the fact that the re-entry is not a new deal, but one previously approved in 2015.

Noronha said that’s a farce, as everything about the deal has changed.