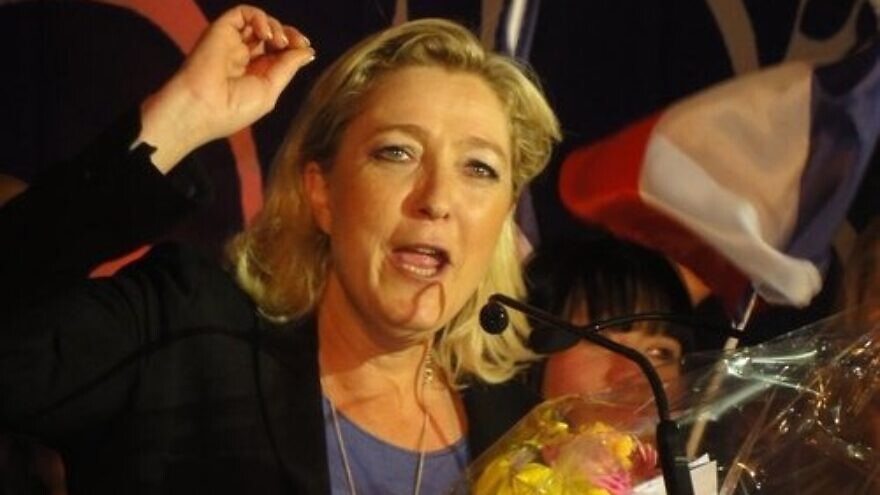 (April 14, 2022 / JNS) “Jerusalem must become the capital of both states, Israel and a Palestinian state, pending a negotiated settlement of the conflict,” said French presidential candidate Marine Le Pen during a press briefing on foreign policy issues.

“The Israeli-Palestinian conflict can only be resolved by the creation of a viable and democratic independent Palestinian state living in peace and security alongside Israel on borders based on the 1967 lines. This is a fair, equitable and agreed solution to the problems of refugees,’’ said the leader of the extreme right National Rally party who, as in 2017, will again face incumbent President Emmanuel Macron in a run-off election on April 24.

“For the sake of consistency and because I believe it is right, politically, historically and morally, I will remain faithful to the official line of the Quai d’Orsay [the French foreign ministry], that is to say, France’s commitment to the two-state solution,” said Marine Le Pen.

According to her, the French position represents “the only solution that can meet the national aspirations of Israelis and Palestinians.”

“France advocates the creation of a Palestinian state and considers that Jerusalem must become the capital of both states pending a negotiated settlement of the conflict and under international law,” she added, stressing that Paris does not “recognize any sovereignty over Jerusalem.

Early in April, in an interview with i24NEWS, she had also said that the transfer of the French embassy from Tel Aviv to Jerusalem was “not on the agenda.” She pleaded in favor of an “international status” for the city.

Israeli authorities have so far refused to receive Le Pen because she is the daughter of Jean-Marie Le Pen, founder of the extreme-right National Front and a convicted Holocaust denier who stated that the Holocaust was a mere “detail” of the Second World War.

Both main Jewish organizations in France, the Representative Council of Jewish Institutions (CRIF) and the Central Jewish Consistory, have called to “barrage” Le Pen and vote ‘’massively’’ for Macron on April 24.

“The CRIF calls for a Republican Union to prevent the extreme right from coming to power,” it said in a statement.

The organization noted that the first round of the presidential election last Sunday saw the “weakening” of the Republican camp and “the dangerous strengthening of the populist parties of the extreme right and the extreme left.’’

“Our individual freedoms, our social diversity, our traditions and the stability of our country are at stake,” said the statement. “The real face of Marine Le Pen is the one she shows to the most violent and xenophobic leaders of Europe to whom she is close on a personal and ideological level.”

CRIF President Francis Kalifat warned that “no calculation, no pretext could be invoked to escape our civic responsibility in the face of a choice that is not one: we must call for a massive vote for Emmanuel Macron to preserve our democracy.”

Elie Korchia, president of the Central Consistory, which represents the Jewish faith, and France’s Chief Rabbi Haïm Korsia, warned of “a new danger for the cohesion of the French population,” and called “to overcome political divisions and vote for Emmanuel Macron” to “ensure the preservation of Republican principles as well as humanist values advocated by Judaism.”

Jewish institutions are opposing Le Pen’s stated desire to ban the slaughter of animals without stunning, and thus shechita, “as a serious attack on freedom of religious practices” which, the Consistory insists, “is a a pillar of our Constitution.’’