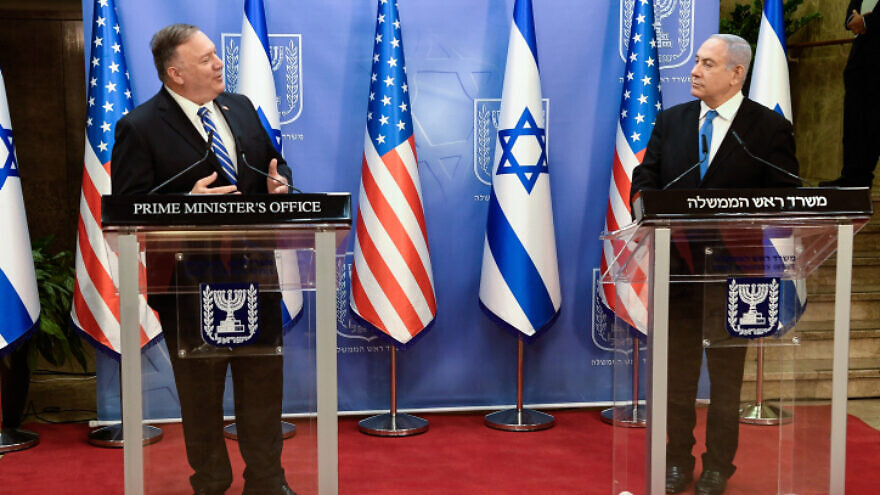 (August 25, 2020 / JNS) U.S. Secretary of State Mike Pompeo set out from Israel to Sudan on Tuesday via what he said was the first official direct flight between the countries.

“Happy to announce that we are on the FIRST official NONSTOP flight from Israel to Sudan!” he tweeted.

One of the subjects on the agenda during the talks was said to have been the agreement by the United Arab Emirates to work towards normalizing relations with Israel and potential moves by other countries to do the same.

At a joint press conference following the meeting, Netanyahu thanked the Trump administration for its role in brokering the normalization agreement he said “heralds a new era.”

“The creation of full normalization between Israel and the United Arab Emirates … has been a boon to peace and to regional stability. I think it heralds a new era where we could have other nations join. We discussed this and I hope we will have good news in the future. Maybe in the near future,” said Netanyahu.

“This is the alliance of the moderates against the radicals. Against those who use violence and aggression to further their aims. Against those who believe that we can offer a better future for our people through cooperation. It spells a change in the Middle East. It’s the first time in a quarter of a century that we have a peace agreement. I want to thank the president again, and you and your administration for helping to bring it about,” he continued.

Sudan’s Foreign Ministry spokesman said last week that his country was “looking forward to concluding a peace agreement with Israel.”

But he was then fired for his comments, according to SUNA, the official Sudanese news agency, after acting Sudanese Foreign Minister Omar Qamar al-Din Ismail was said to have expressed surprise over the spokesman’s announcement, reportedly stating that “there are no talks between Sudan and Israel.”

Pompeo is also traveling to the UAE and Bahrain on his current trip, according to the U.S. State Department.